A conflict fueled by old tactics and new weapons, the “Great War” was brutality incarnate. Here's a look at the rifles that eventually helped the Allies win World War I.

The Great War, now commonly referred to as World War I, began after the assassination of Archduke Franz Ferdinand of Austria in June 1914. By mid-August 1914 most of the major European powers were at war. The United States entered on the side of the British and French in April 1917.

WWI signaled the end of the age in which conflicts were settled with some semblance of chivalry. It was a war of rapidly changing technology, fought using tactics of the Napoleonic era. Companies, even battalions of soldiers, were thrown against squads of men, each squad manning a single machine gun capable of firing 800 rounds a minute. One General responded to the rapid destruction of his entire Division by telling his men to “dig, dig, dig, until you are safe.”

By Christmas 1914 a trench system wound its way from the Belgian coast on the North Sea to the Swiss border some 1500 kilometers away! For four years, until November 1918, the trenches remained in place, virtually unchanged. The word stalemate entered the dictionary to describe a useless situation with no foreseeable conclusion. The result was 8.5 million dead and 21 million maimed and disabled, plus 12.5 million civilian casualties.

The bolt-action rifle was standard armament among the 30 nations involved in this global conflict, with some members of the Allies – countries at war with Germany – paying licensing fees for their rifles to the German firm of Waffenfabrik Mauser. The dominating firearm of the war was the machine gun. Once thought wasteful and expensive, its use ensured that neither side could advance on the other without incurring horrifying losses. The war was brought to an end on November 11, 1918, by the combination of overwhelming Allied offensive action and the spread of revolution throughout Germany that forced the Kaiser's abdication and the replacement of the monarchy with a civilian government willing to surrender.

A variety of bolt-action arms were used by the Allied nations in WWI to equip their infantry units. Some countries found that demand for rifles could not keep pace with production so other models for which tooling and machinery already existed were put into service production. Canadian soldiers, for example, were armed with either homegrown Ross rifles the Models 1905 or 1910, the British Enfield SMLE #1 Mk III, or American-made Pattern 14 Enfields! 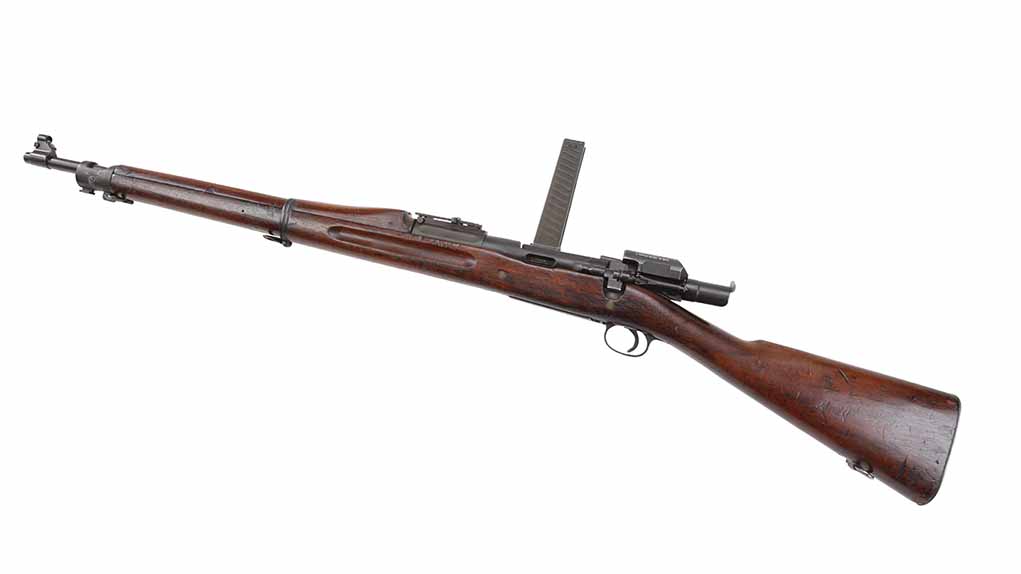 Semi-Automatic-.30 caliber-circa 1918-1920: The top-secret Pedersen device, also known as the “Automatic Pistol Caliber .30 Model of 1918,” was a semi-automatic conversion for the bolt-action Springfield rifle. The 1903 Mk I rifles intended to use the Pedersen device had a small port milled into the left receiver to allow spent cases to be ejected. Approximately 65,000 Pedersen devices were manufactured and were intended to be used in the Spring Offensive of 1919. When World War I came to a close with the Armistice on November 11, 1918, no future need was foreseen for the Pedersen devices and they were destroyed. 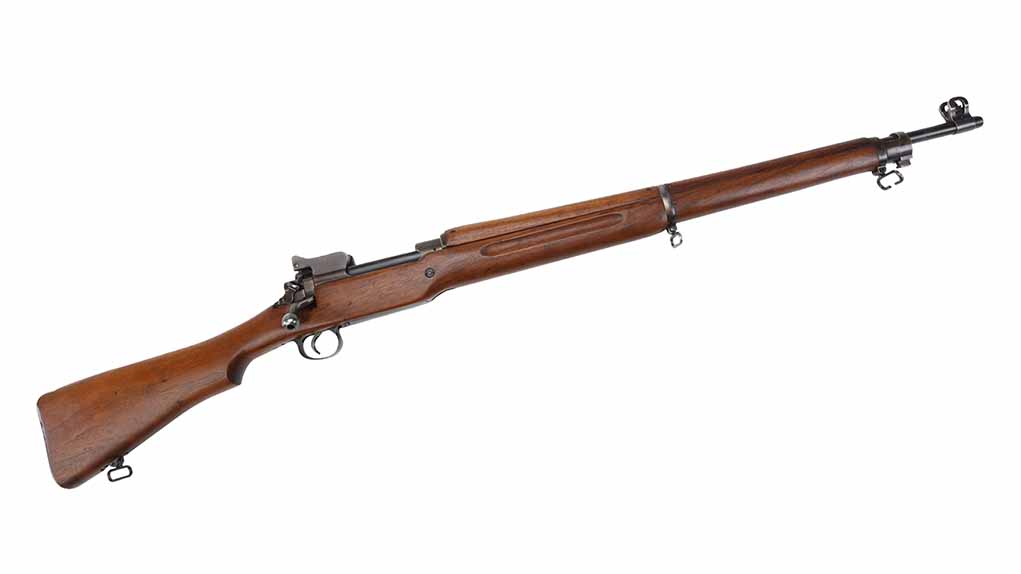 British Enfield No. 3 Mk I Bolt-Action Rifle-.303 British-circa 1942-1943: The fast-firing SMLE could empty its ten-shot magazine in less than 20 seconds with an adept shooter. Experimental Semi-Automatic Rifle-.303 British-circa 1909: The long recoil-operated Farquhar-Hill was intended as a squad automatic rifle and was tested by British Ordnance’s Small Arms Committee in 1908. A 20-round drum magazine was intended as the standard configuration although other magazine capacities were also tested. This example is one of the rarer semi-automatic-only versions. 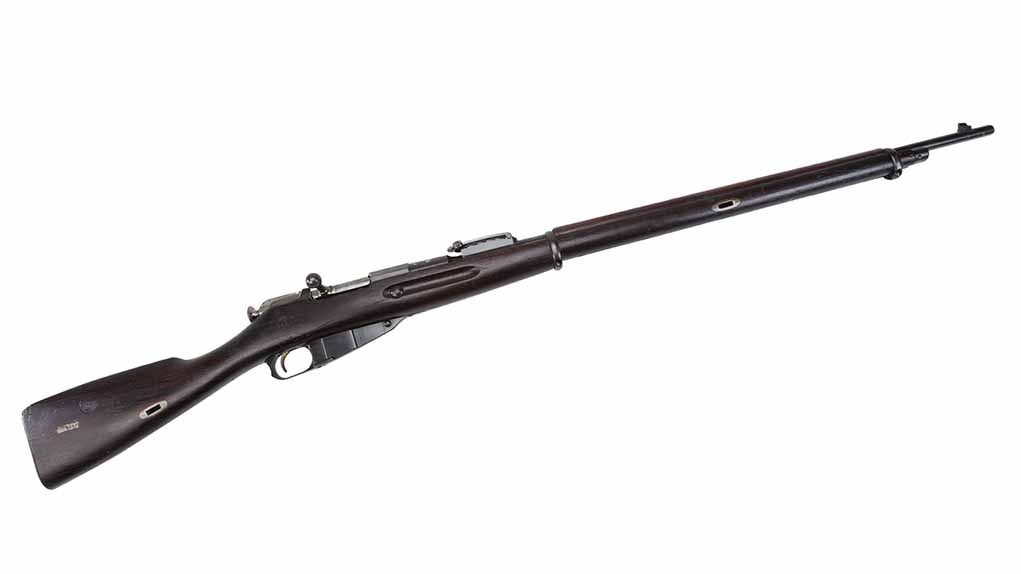 Bolt-Action Rifle-7.62mm x 54 Russian-circa 1917: This Mosin Nagant rifle was tested by NRA during the WWI period. Straight-Pull Rifle-.303 British-circa 1906: The straight-pull line of Ross rifles had a reputation for being unsafe firearms due to a complicated bolt that could be incorrectly reassembled and would fail to lock the action correctly during firing. During the interwar period and during World War II, the Ross rifles still in inventory were utilized for non-firing training duties. Bolt-Action Rifle-8mm Lebel-circa 1900-1918: The French Lebel was one of the first rifles to employ both jacketed bullets and smokeless powder. Semi-Automatic Rifle-8mm Lebel-circa 1917-1925: French semi-auto rifle designs did not come into use until late in WWI. Bolt-Action Rifle (sectionalized)-8mm Lebel-circa 1907: This cutaway of a military firearm illustrates many of its otherwise hidden internal mechanisms. Editor's Note: The article is an excerpt from The Illustrated History of Firearms, 2nd Edition.

Glock P80: The One That Started It All