Gun Digest
Home Gun Articles Birdshot For Home Defense: Too Much, Too Little Or Just Right? Does birdshot provide the stopping power you need without concerns of over penetration? We test to find out.

Is Birdshot Wise For Home Defense:

Right after the much beloved 1911 pistol versus Glock handguns argument, maybe no other firearms topic enjoys as much debate as shotguns for home defense. And because the shotgun is such a versatile weapon and can fire drastically different types of ammunition, this leads to another dimension in the debate: Which is what type of ammo is best for home defense? Law enforcement agencies have long used No. 00 buckshot as the ammo of choice, and within the effective yardage boundaries of buckshot, there’s no doubt it is effective.

In my time of wearing a badge and toting a gun, I saw lots of people that had been shot, including many with shotguns. Some were murders, some were intruders in homes and a lot were hunting-related shootings — both people being mistaken for game and accidental discharges. One thing always surprised me: how many fatalities actually occurred with shotguns, even at some distance. Though the pattern of the shot had acquired some spread, often some of the shot would find its way to the victim’s vitals … and it was lights out.

The specter that always arises is the issue of using large buckshot for home defense purposes, or instead using something that’s seemingly tamer, such as in shotshells loaded with No. 6 or No. 7½ shot. Proponents of large buckshot will say that No. 00 buck loads are needed to put down an aggressor. Those who chose smaller shot for these situations maintain that buckshot tends to have too much penetration and will endanger others in the house when it shoots through walls.

So, all that leads to one question: Is smaller shot adequate for home defense concerns and safer for others in the house? Let’s see.

I built two walls, double-sided with drywall or sheetrock, whatever you call it in your part of the country. The walls were framed in 2×4 pine lumber with studs in the middle, spaced 16 inches on center, and rolled fiberglass insulation between the studs. In other words, they’re much like walls found in most stick-built houses across America.

The walls were placed about four feet apart to simulate this scenario: If you fire at an intruder in your home with birdshot loads — and miss — what happens to the first wall on impact, what would the effect be on anyone in the simulated hallway, and how would the opposite wall stand up to the pellets? Also to be noted is the spread of the pattern at 10, 15 and 20 feet. Remember: We’re talking about confrontations occurring in the home here, and most would be at very close range.

I placed blocks of Clear Ballistics gel in front of the second wall to get some idea about what penetration would be like if a person should be standing in the hallway when the shot came through the first wall.

The entire test was done with a new Retay USA shotgun, the Masai Mara Warden. Retay makes a full line of the Masai Mara (named for a wildlife reserve in Kenya) shotguns in field guns, turkey and waterfowl models. The Warden is a tactical-home defense model and the latest of this line. All of the testing was done with a modified choke. I used 2¾-inch Aguila sporting clays shotgun ammo, packing 1 1/8-ounce of No. 7½ shot moving at 1,325 fps.

Redecorating With A Shotgun

Aided by my able assistant, shots were fired into the first wall from 5, 10, 15 and 20 feet. All of the shot payloads penetrated both sides of the first wall, making a neat hole in the center of the pattern, very similar to that of a slug.

The shot then struck the Clear Ballistics gel and the second wall. Regarding the shot that struck the wall and not the gel: All of it penetrated the front of the wall. Virtually none of the No. 7½ shot emerged from the rear of the second wall, with the exception of one pellet.

And just because I knew it would come up in the mind of someone — maybe everyone — reading this, I fired one round of Remington No. 00 buckshot from 15 feet. The buckshot did not seem to slow down on either wall, and the pattern was about the same on the entrance of the first wall as compared to where it exited the second wall.

Here’s how the information on the test shots into the wall shook out. 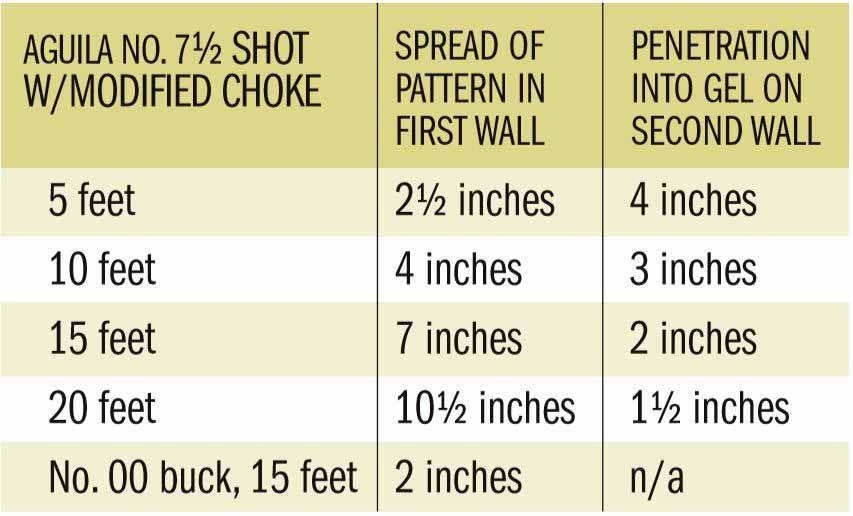 Thoughts On Shooting Holes In Walls

I would think it’s clear that an assailant at any of the ranges noted (and somewhat beyond) has had a very bad day if shot with birdshot of any size. This is somewhat intuitive information, but a payload of fine shot, delivered from close-range tends to pattern very close together and will leave a wound much like a shotgun slug.

I cannot address this fact without reminding shooters that sights on a tactical or home defense shotgun are very important. The tired old adage of “just point the shotgun in the general direction because you can’t miss” really needs to go away. The cold, hard truth is that you can miss. Look at the pattern sizes of the accompanying images: In home defense situations in close quarters with adrenaline running full blast, missing is very easy to do. Open rifle sights on a shotgun are vital, and large ghost-ring rear sight is even better.

Also important here is the fact that friendlies and family members behind a wall inside the home are very much at risk if we send a load of shot their way. The data shows that after the second wall of standard construction, you may be OK when shooting fine shot — but I wouldn’t bet the farm on it. Knowing where others are located in the home is very important if you ever find yourself in a home defense fiasco.

Another important point is the big difference between birdshot and No. 00 buckshot. We’ve shown that fine shot will be very lethal to your intended target, but it’s more easily stopped by walls inside the home. If you’re alone in your home or think you will always know where family members are located (I wouldn’t bet the farm on that, either), then No. 00 buck might be the way to go — but remember how it exited from the second wall.

This article originally appeared in the March 2019 issue of Gun Digest the Magazine.