What are the best precision rimfire rifles:

Shooters tend to overlook rimfire rifles. They don’t fit the tactical mantra and they’re not suited for worldwide big game hunting. But, they are the most fun and most affordable firearms to shoot: You don’t need a fancy range or high-tech targets — a backyard and everything from pop cans to Skittles will do. 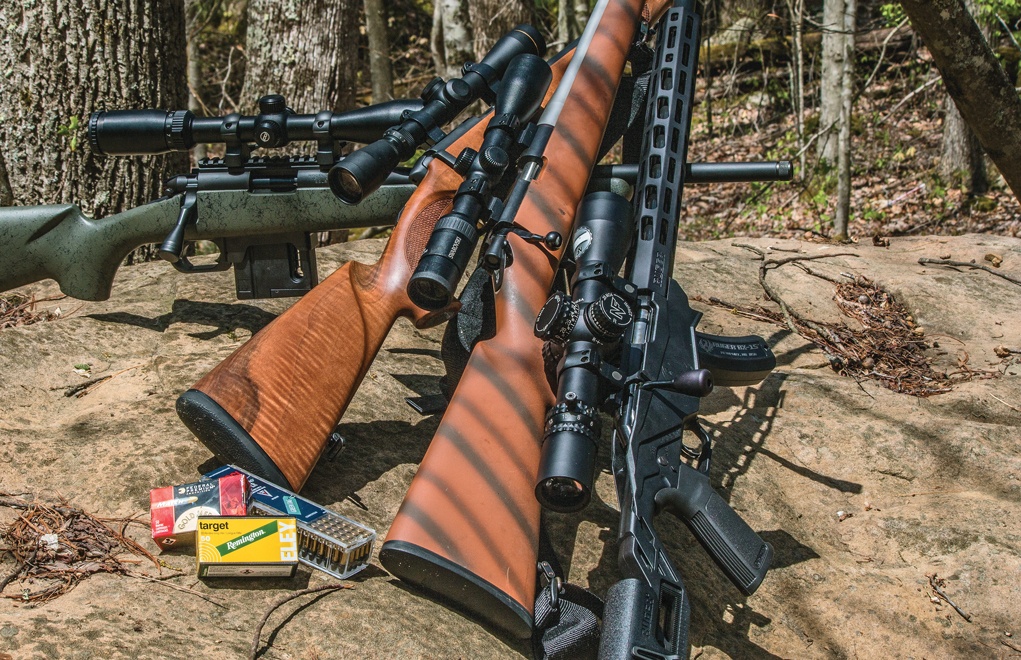 Modern rimfire rifles can be astoundingly accurate. I tested four, priced from $500 to $2500. They varied just as much in style and substance. Depending on whether you want to consistently hit a golf ball, M&M or an Aspirin at 50 yards, you’ll need a different level of precision. I fired a bunch of ammo through each of these rifles to get a feel for them, and to see which ones were Aspirin capable.

Introduced in late 2017, the Ruger Precision Rimfire Rifle is really a sub-caliber rendition of a centerfire bolt-action rifle, housed in a highly adjustable chassis stock. In fact, centerfire rifles of this type have become one of the hottest selling firearms in America. Right now, precision long range shooting is as hot as Britney Spears in a string bikini.

The Ruger Precision Rimfire has a molded, one-piece chassis, with a buttstock that’s fully adjustable. It allows optimum tuning for shooter interface; you can adjust the length of pull and comb to perfectly suit you. The handguard is aluminum with a black anodized finish and it features Magpul M-Lok slots on four sides. It surrounds an 18-inch, cold-hammer-forged barrel, made from 1137 alloy steel.

Ruger also fitted their AR-pattern pistol grip, 45-degree safety selector, threaded muzzle, oversized bolt knob, 12-slot Picatinny/30 MOA rail that’s integral to the receiver, and a Ruger Marksman Adjustable trigger with a pull weight range of 2.25 to 5 pounds. It will also accept all 10/22 magazines, giving you a wide choice in capacity. Out of the box, without the magazine or a riflescope in place, it weighs 7 pounds.

Forget the Ruger’s futuristic looks: This rifle is just as adapt for small game hunting in the timber as it is for shooting prairie rats off a portable shooting bench in the wide-open spaces. At about half the price of the next most expansive rifle tested, the Ruger Precision Rimfire Rifle has a lot going for it, and its modular-like platform makes it the most versatile of the bunch. It also delivered the least precise performance on target, at just under two MOA — an inch at 50 yards. This is, of course still, squirrel-head accuracy.

After seeing how well the other three rifles shot, I gave the Ruger a chance for redemption by testing four additional loads. There wasn’t much difference with the exception of the Aguila Super Extra load, which the rifle seemed to really like. Aside from a feeding hiccup here and there, the rifle performed well, especially given its price point.

When I was a boy, my life revolved around a rimfire rifle. It was my ticket to every imaginary world I went to. My rimfires were hillbilly-basic and affordable, and I dreamed of a rimfire made for a man. Admittedly, there’s no way I could have afforded a rifle like that, but that didn’t stop me from dreaming.

For 2018 Steyr Arms introduced the Zephyr II. This is a full-size rimfire, with an overall length of almost 40 inches and a 14.5-inch length of pull. As full size as this rifle is, it’s not heavy; without the scope and rings it weighs only 5 pounds, 15 ounces. The elegant European walnut stock is configured to fit a grown man, and its elegant lines, Schnabel forend, slight palm swell, Bavarian cheekpiece, fish-scale checkering and integral sling swivel mounts all add to its majesty and appeal.

If that was not enough, the Zephyr II has the old-style, traditional butter knife, Steyr Mannlicher bolt handle, spiraled texture of the cold-hammer-forged barrel, scope mounts that are integral to the receiver, and a two-position tang safety. Though Steyr lists the trigger as being single stage, it has a good bit of near-effortless take-up, allowing you to stage the brake, which comes with only 2 pounds of pressure.

This is a fabulous rifle. It shot incredibly well from the bench and just as wonderful off-hand. The bolt requires a bit of effort to close and the rifle does not come with scope rings. (I’d suggest you get a set of Talley steel rings — they’re the best money can buy and are fitting for a rifle this fine.) I’ll be buying this rifle … it’ll not go back to Steyr. In fact, it has inspired me. I can’t wait for a cool morning after a fall rain, to sneak into a hickory patch and use it to wreak havoc on the fox squirrels.

The Melvin Forbes rifles of New Ultra Light Arms have long been regarded as the finest bolt-action hunting rifles on the planet. They earned their reputation partly because of their proprietary, stiffer than steel, carbon-fiber and Kevlar stock, and partly because Melvin Forbes may know how to assemble a rifle better than anyone else. Forbes did not intend to build rimfire rifles, but he finally gave in to the pleading of his customers.

Built with the same type stock as his centerfire bolt-action rifles, when it comes out of the mold it nearly floats because it only weighs 8 ounces. Forbes then beds these stocks to the action, from the tang to the tip of the forend. Though this may seem to go against everything you know about rifle accuracy, the rifle stock is so rigid it makes the barrel think it’s much stiffer than it really is.

New Ultra Light Arms offers two rimfire rifles: one is a single-shot, the other a repeater. Both come standard with an excellent Timney trigger and Douglas barrel. Since this is a full custom rifle, you can specify any legal barrel length you like. (For what it’s worth, with the 22 Long Rifle, barrels longer than 16 inches generally reduce velocity.) You can also specify whatever color scheme you’d like on the stock, and there are two stock options. If you prefer one configured in more of a bench rest pattern, it’ll cost you an additional $58. The magazine fed option is an additional $50.

Short of the near $2,000 price tag, it’s hard to say anything bad about this rifle. The one evaluated is mine. It weighs only 5.68 pounds with the Talley lightweight rings attached. (The Talley rings come with the rifle.) This rifle is more than 10 years old, has been shot thousands of times, and has very likely killed 20 times its weight in squirrels and other small game.

Vudoo Gun Works out of Saint George, Utah, offers six rifle variants, all built on their V-22 action. At $2,395, the Raven is their least expensive. (The Crow — which is essentially a Raven — retails for the same price, but it’s sized for smaller shooters.) Any way you look at it, that’s a lot of money to spend on a rimfire rifle. Or is it? I know shooters who spend twice that much on centerfire rifles they’ll never shoot near as much as a 22. Thing is, if we’re talking Aspirin accuracy at 50 yards, you’re either going to have to pay for it — or pray for it.

The V-22 action used by Vudoo Gun works is proprietary but it has a Remington 700 footprint, meaning it can be fitted to rifle stocks cut for the Remington 700. The V-22 action also works with the Vudoo V-2210 magazine, a magazine that’s patterned in the AICS form, so it will slip right in to any chassis or detachable box magazine housing AICS magazines work in. The action is an engineering masterpiece, and it’s fitted with a precision manufactured, hand-lapped, single-point-cut rifle barrel. It’s also available in left- and right-hand variations.

The Raven’s stock is manufactured by Grayboe. It’s called the Outlander and it was custom designed for Vudoo — just for the Raven. It comes standard with a soft, 1-inch, Decelerator butt pad. Why? I don’t know; there’s no recoil with a 22 LR. The Raven is not what I’d call a light rifle; without a riflescope or rings — but with the 10-shot magazine in place — it weighs 7 pounds, 13 ounces.

The Vudoo Raven is undoubtedly the most precise shooting rimfire rifle I’ve ever fired, and it delivered the smallest group out of the 80 groups fired from all four rifles. That group measured 0.087 inch! With precision like that, the Raven is begging to go to the woods or field, for tree or ground squirrels. But, it might be more fun to use the Raven to win cash from your friends; I doubt they’ll have anything that’ll shoot like a Raven. And, you can use the money to pay off your credit card.

Obviously, money buys precision. The more money you spend, the better shooting rifle you’ll end up with. Of course, when we’re talking rifles that shoot this well, there are other things to consider. What you intend to do with the rifle might matter more than the advantage 1/10th-inch or so in accuracy offers.

If I wanted a cool-looking, egg-accurate rifle — and my wallet was thin — the Ruger Precision Rimfire would be the obvious choice. If a traditional hunting rifle was where my dreams took me, I know of nothing better than the Steyr Zephyr II. If your weakness is M&M accuracy and unmatched ruggedness, there’s the Model 20 RF from New Ultra Light Arms. And finally, if you just want the best shooting rimfire rifle money can buy, the Vudoo Raven is probably the one. You can use it to shoot the left over Aspirins, when your head recovers from sticker shock.

If I could only have one of these rifles, it would be the Steyr Zephyr II. It shoots better than I can, and with the $1,000 I saved, I could buy a lot of 22 LR ammo. In fact, $1,000 will buy more than 10,000 rounds of the good stuff. Fortunately, here in America, we can have as many rimfire rifles as we want, so why not get more than one?

NOTES: The average muzzle velocity (VEL) standard velocity deviation (SD) and maximum velocity deviation were established by firing 10 shots with each load over a Caldwell G2 chronograph, with the screens positioned 10-feet in front of the muzzle. Note: Average accuracy/precision was established by firing of five, five-shot groups, from a sandbag rest, at a distance of 50 yards. Temperature: 66-74° / Humidity: 42-69% / Pressure: 30.00-30.20 / Elevation: 2,200 feet.