The 3.3-inch Springfield XD-S 9 in Flat Dark Earth might just be the unsung hero of concealed carry handguns.

Springfield’s XD series of pistols has been around since 2001, but the latest iteration, a 3.3-inch XD-S 9mm in Flat Dark Earth (FDE), is perhaps the X-factor when it comes to compact carry handguns. Right out of the box, the XD-S is loaded with value, featuring a highly functional design and quality barrel that delivers supreme accuracy in a carry-friendly package.

My confidence in the XD-S has only grown over the years, especially with the number of defense contractors or personal protection professionals who’ve told me it’s their go-to firearm when duty calls. To me it says a lot when someone who puts their life on the line everyday, and who could quite frankly choose any gun they wanted, opts for a gem out of the Springfield Armory. Design And Features
The goal with the design of the XD-S was to provide the feel and control of a full-size handgun in a compact package, a shootable carry gun. With that purpose in mind, the XD-S is a polymer-framed pistol of the single-stack variety, giving you seven rounds, plus one in the chamber, with the flush-fitting magazine and 8+1 with the Mid-Mag X-Tension mag. The trigger is what you’d expect to find on a carry gun, which means relatively heavy, and has a crisp, audible reset and a grip safety for added security. The heavily textured grip helps in controlling what is a power-packed handgun, fully capable of leaving those same grip marks indented into your palms after a few boxes of ammo at the range. The rear portion of the grip comes with an interchangeable grip panel to accommodate different sized hands, while grip width itself is .9 inches—small enough to promote concealability but big enough to give you a solid purchase on the firearm. Extremely important for carry, the height is 4.4 inches with the flush magazine and 5 inches with the extended mag.

While other manufacturers leave you with a set of standard front and rear white-dot sights, Springfield provides a fiber optic front sight right out of the box that provides easier target acquisition. The other nice feature is an ambidextrous magazine release that protrudes just enough to make no-look mag swaps easier. As opposed to the XD 3-inch sub-compact, which holds 13+1, the XD-S holds, as mentioned earlier, either 7+1 or 8+1, which means you’re trading a bit of concealability and width for a few extra rounds. Carry Friendly
I’m of small to medium stature, so handgun height is the critical dimension when it comes to avoiding major printing under clothing—it’s always the longer grip that sticks out. The extended magazine is a nice addition, however, since it serves as a backup for carry or as your best choice when emptying cases at the range. The extra .6 inches allows you to get that pinky finger on the grip, giving you substantially better control.

Even in 9mm, the XD-S packs quite a punch without that added grip extension. A fairly short barrel (3.3 inches) and light weight (23 ounces, unloaded) mean you’re hands are eventually going to feel it at the range, but for the purpose of carry it’s an easy trade off to make. It’s still an enjoyable little gun to shoot, especially with the Mid-Mag X-Tension and a 9mm chambering. Unlike some of the smaller “micro nines,” the XD-S still has a full enough frame and grip to provide impressive accuracy and control. Dimensionally it’s similar to the Smith & Wesson M&P Shield or Glock 43. In terms of everyday carry, the XD-S hits the sweet spot. I carried it around for a few weeks with a CrossBreed Mini Tuck, which is the scaled down version of the SuperTuck Deluxe, and it quickly became one of my two favorite carry rigs. I’ve also found it works great for appendix carry, in either the CrossBreed Appendix Carry holster or a Blade-Tech holster with Laserguard green laser from Crimson Trace. I carried it primarily on the hip at the 3 o’clock position with a CrossBreed magazine holster at 6 o’clock, and it was both comfortable and remained easily concealed. 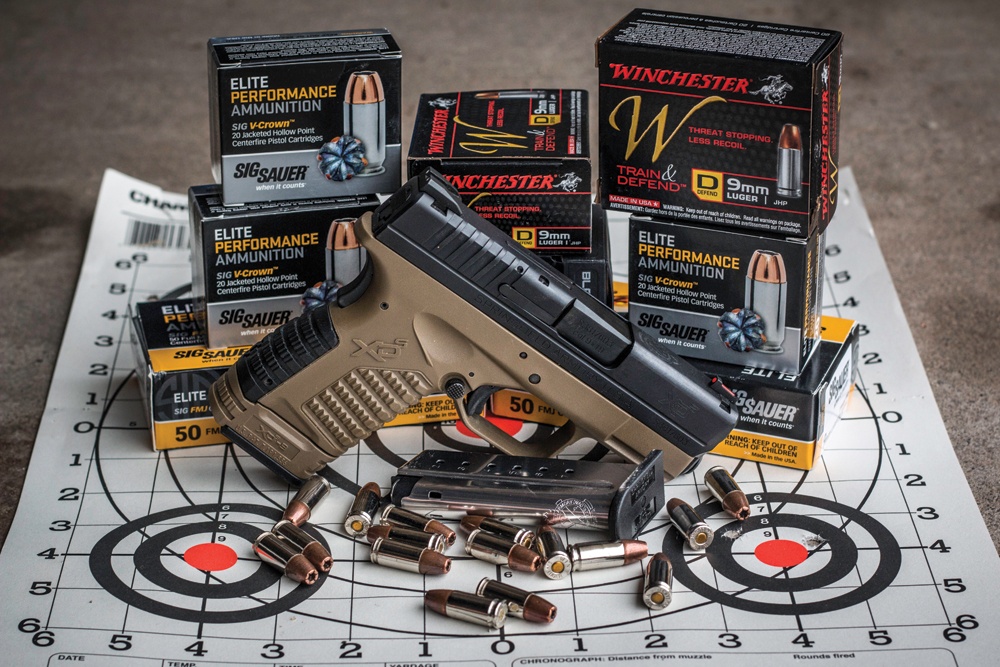 Range Performance
Anytime you opt for a compact handgun, you’re generally sacrificing some measure of accuracy and/or controllability. But after firing at least 80 rounds at the range with no issues, the XD-S proved that it’s more than capable of delivering supreme accuracy in a carry platform. All range data was collected from a distance of 20 yards from sandbags and was based on multiple three-shot groups.

The XD-S handled a wide variety of ammunition, from HPR’s 85-grain Black Ops OTF to SIG Sauer’s Elite Performance 147-grain V-Crown JHP, and had no malfunctions whatsoever. The 147-grain bullets performed the best, with Winchester’s Train & Defend JHP producing a best group of 1.24 inches and SIG’s V-Crown coming in at an equally impressive 1.31 inches. Considering most defensive shooting scenarios will occur far closer than 20 yards, the XD-S is more than capable of delivering adequate accuracy and beyond. Likewise, the extended magazine serves as a range-friendly option to give you greater accuracy and control when your main goal is not concealability. There is some loss in velocity with a 3.3-inch versus 3.8-inch barrel, but in the 9mm it’s somewhere between 20 and 50 fps—not enough to lose sleep over. Parting Shots
With an MSRP just south of $500, the 3.3-inch XD-S 9 mm in FDE is a tremendous buy. It’s a fantastic carry gun and offers impressive accuracy and control for a compact, single-stack 9mm. Reliable, good looking and highly accurate—what’s not to love about that? Springfield has proven itself to be a leader in innovation and delivering what the consumer wants, and the XD-S 9 in FDE represents another homerun.