Coonan .357 Magnum 1911s in Classic and Compact are powerful defensive handguns that can be surprisingly concealable.

While not everyone agrees, a lot of experienced shooters say that John Browning’s 1911 pistol is the greatest fighting handgun ever designed. Many major gun manufacturers offer them, and several smaller manufacturers exist primarily because they specialize in building them. An example is Coonan, Inc. — but there’s a twist. 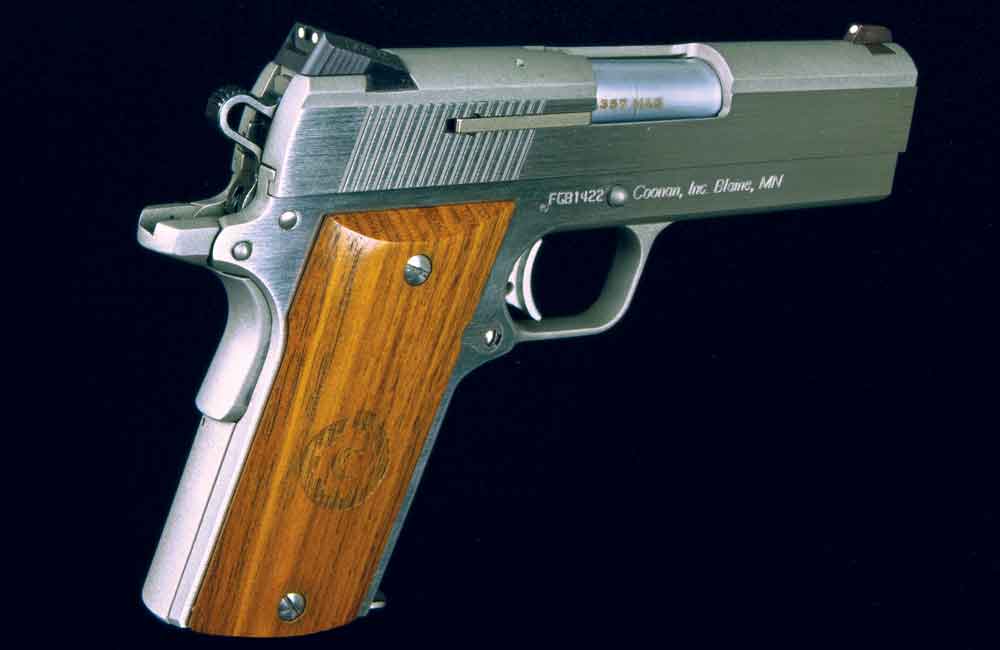 Whereas most 1911s are chambered in .45 ACP or 9mm — yes, there are other chamberings — Coonan wanted more power and decided a 1911 chambered in .357 Magnum was needed. Adopted by many law enforcement agencies since its creation in 1935 and able to cleanly take some game, it developed a great reputation. However, the .357 Magnum is a rimmed cartridge and is longer than the cartridges usually used in 1911s.

That meant a redesign.

Coonan set out to get it done, and they did, although the gun still uses many of the same parts found on a standard 1911. And the controls are about the same, too, so an experienced 1911 shooter will be comfortable with a Coonan. Sure, the gun is a little larger to accommodate the longer cartridge, and therefore the grip circumference is greater, but the end result is surprisingly close to the original. It’s so close that, despite the .357 Magnum chambering, it’s feasible to carry the gun discreetly for self-defense. Sure, it’s a bit on the larger side, but not so much that the gun is too big for someone comfortable with carrying a 1911. And as a bonus, the Coonan website lists many holster manufacturers that currently make discreet carry holsters to fit.

Packing The Power
So why would anyone want a 1911 chambered in .357 Magnum? The most obvious answer is power. A typical 230-grain .45 ACP delivers about 370 foot-pounds of muzzle energy, but the 158-grain .357 Magnum tops it with about 505 foot-pounds. And generally speaking, the more energy delivered to the target, the better chance of stopping a dangerous, felonious assault or bringing down a prized game animal.

More muzzle energy, of course, means more recoil. It’s physics. But the Coonan is surprisingly comfortable to shoot, especially when compared to the typical .357 Magnum revolver. With a revolver, recoil energy is instantaneously transmitted through the solid frame and grip to the shooter, so the impulse is sharp and heavy. But with a semi-automatic handgun, the slide and barrel move under recoil relative to the frame, and that slows delivery of the recoil impulse to the shooter. The result is softer felt recoil. Incidentally, the Coonan Classic will also shoot .38 Special rounds, which deliver even less recoil.

Pick Your Poison
Coonan makes several models, all variants of the original Coonan Classic. A Classic — the full size — and a Compact were received for testing. Both were rendered in stainless steel, although different grips and finishes are available. The Classic and Compact share most of the same features, but even with the shorter grip, the Compact offers enough room for most to grip it with the small finger. Grips on both models are smooth, light-colored wood. The front straps and mainspring housings are also smooth, although textured mainspring housings and grips can be ordered.

The grip safety has an extended beavertail to protect against hammer bite, but it’s not upswept like those often seen on 1911s. Still, it’s functional; though, the grip safety doesn’t have the common palm hump to ensure activation.

Magazines are stainless with visible slots on each side to see remaining rounds. The magwell is also beveled for fast reloads. The checkered mag release is located in the usual position.

The thumb safety on each has a wide shelf and worked properly, with a distinct click. The slide stop is extended rearward for easier right-handed thumb activation. Many will still have to shift their grip, though, to reach it. But most top-tier schools teach students to rack the slide if it’s locked back rather than press the slide stop. While pulling the slide to the rear and releasing it worked on the Classic, it didn’t on the Compact. The slide stop had to be manually pressed.

Instead of a trigger that moves fore and aft in a straight line as on a traditional 1911, Coonan’s trigger pivots from the top. It worked well, with both guns exhibiting a bit of take-up and a clean break. The Classic’s trigger had a small bit of creep and no overtravel, while the Compact’s had no creep and a bit of overtravel. Neither proved to hinder good shooting. The slides are slab-sided with a rounded top, just like Browning’s design. At the rear are serrations that permit a solid grip when racking the slide. Up top, Coonan has used black three-dot sights that are drift adjustable for windage and equipped with set-screws to hold them in place. They afford an efficient sight picture.

With a 4-inch barrel on the Compact model, as compared to a 5-inch barrel on the Classic, some changes needed to be made in the recoil spring assembly. While the Classic’s recoil spring guide rod, spring, retention plug and bushing resemble those of standard 1911s, the Compact uses a full-length guide rod and no bushing. So, to disassemble the Compact, a bent paper clip or similar piece of wire must be inserted into a small hole in the guide rod to retain the spring during disassembly. After the recoil spring assembly is removed, the spring bushing, guide rod and spring can be carefully disassembled for cleaning.

The Bottom Line
Both guns proved accurate off the bench at 25 yards, with the Classic besting the Compact by a small bit. Of equal importance, no malfunctions occurred in testing. These were used guns, so it’s possible deficiencies were uncovered in prior use and corrected before being sent for review. That said, there’s no point in trying to find a problem where there isn’t one.

The Coonan Classic and Compact 1911s chambered in .357 Magnum are pleasant-shooting guns despite the magnum chambering, and each could serve a number of roles, including self defense, hunting and just having fun at the range. And in diminished light, they will certainly attract attention with the fireball emitted from the muzzle.

This article originally appeared in the Concealed Carry 2017 issue of Gun Digest the Magazine.