A new book geared toward buyers and sellers of tactical rifles has been released by Gun Digest and author Phillip Peterson (Standard Catalog of Military Firearms 5th Ed. and Collector's Corner columnist for Gun Digest the Magazine). 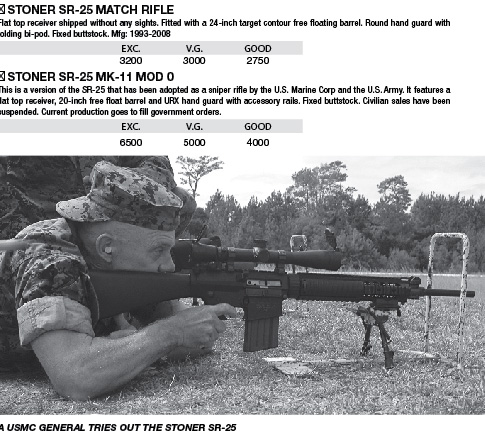 One of the things you immediately notice about the Buyer's Guide that sets it apart from other pricing or value books on the market is the high quality photography, including a nice full color middle section called the Gallery of Tactical Rifles.

Can you imagine a book about tactical firearms without photos? Let's face it, while a book of this type is virtually mandatory for anyone seriously looking to buy or sell tactical guns, one containing only pages and pages of listings and numbers wouldn't be any fun to look at (in fact, it'd be downright painful on the eyes).

Not so with this book. Each page takes you on a delightful little adventure down the yellow brick road (via alphabetical listing by manufacture) of guns from Russia, Europe and America.

Peterson gives tips on how to get the most use out of the Buyer's Guide with a detailed explanation of condition ratings. He also explains that, by “tactical rifles,” he means:

For the purposes of this book it is a semi-automatic rifle or pistol that accepts detachable magazines that hold over 20 rounds of ammunition. A few, such as the Barrett M-82 .50 Cal. rifle and the SVD Draganov Sniper rifle, which have 10-round magazines, are included as they certainly need to be in such a guide.

Given how the term “tactical” is slapped onto just about anything these days — including pens and wristwatches — Peterson explains the decision to limit the book's scope to mostly semi-automatics.

There are some things that carry a tactical label that are not covered in this work. That would include shotguns, bolt action rifles and conventional handguns with rails for attaching lasers or optical sights. Such firearms are certainly “tactical” in nature, but since even some revolvers now have tactical rails built into them, we just had to draw the line somewhere.

But I'm glad to see the editors didn't hold too rigidly to that doctrine, because in the Gallery of Guns you can lay your eyes on a nice full color image of Armalite's .50A1, which is indeed a bolt action single shot.

There's a lot to consider when buying a tactical rifle. This book will be your guide. Buy it now