Equal parts knockdown power, intimidation factor and ease of use, the shotgun is the ultimate personal defense weapon. But to get everything out of a smooth bore when it matters most means feeding it the right loads. Here's are some top choices for defensive shotgun ammunition certain to come through in the most dire situations. Introduced in 2010 and finding plenty of fans since then, Federal’s Personal Defense Shotgun 2¾-inch No. 4 loads are available in both 12-gauge and 20-gauge versions. Tested extensively for home defense situations, these No. 4 loads are designed to generate optimal 15 yard patterns through an improved cylinder choke and are made to dissipate energy upon hitting walls to help you avoid pass-throughs on missed shots. (www.federalpremium.com)

Federal’s Personal Defense 00 Buck loads are heavier hitting than No. 4s for improved lethality at slightly greater ranges, yet deliver tight patterning courtesy of Federal’s patented FLITECONTROL wad. This special shot cup holds shot tight until it has exited the muzzle and then separates from it to allow it to fly true toward the target at 1,145 fps. (www.federalpremium.com)

Smaller gauge guns can be more user friendly for smaller shooters, such as women, but there is no reason these guns shouldn’t be as lethal as larger gauges. The Hornady specialized load is packed with a triple projectile stack that consists of two 35-caliber round balls topped with a single nonjacketed FTX slug. (www.hornady.com) Like it’s 12-gauge big brother, the 410 Defender load packs plenty of punch launching three plated Defense Disc projectiles and 12 pellets of plated BB shot. While it was made for use in the famed Taurus Judge, this is also an ideal short-range engagement load made for a long gun that is more compact than larger shotguns and doesn’t generate as much recoil. (www.winchester.com)

To be effective at self-defense, a gunowner needs to practice shooting and that means time at the range. Remington made it more affordable for shotgun owners to do this in 2013 by packaging their top defensive load—the 2 ¾-inch 12-gauge load of Express 00 buckshot—in 25- or 100-round packages. Inside the shell, a Power Piston one-piece wad enhances consistent patterns, while polymer buffering around the shot limits pellet deformities for better flight. Suggested retail for the 25-round box is $22 and a 100-round box sells for just under $90. (www.remington.com) We’ve covered it in the pages of Gun Digest before, but it’s worth another mention. Remington has met the needs of Judge and other combination revolver fans by creating a pack that combines 10 .45 Colt cartridges with 10 .410 shotshells. The .45s are loaded with Golden Saber High-Performance jacketed bullets while each .410 load is packed with four 000 buckshot. Suggested retail is $34. (www.remington.com) 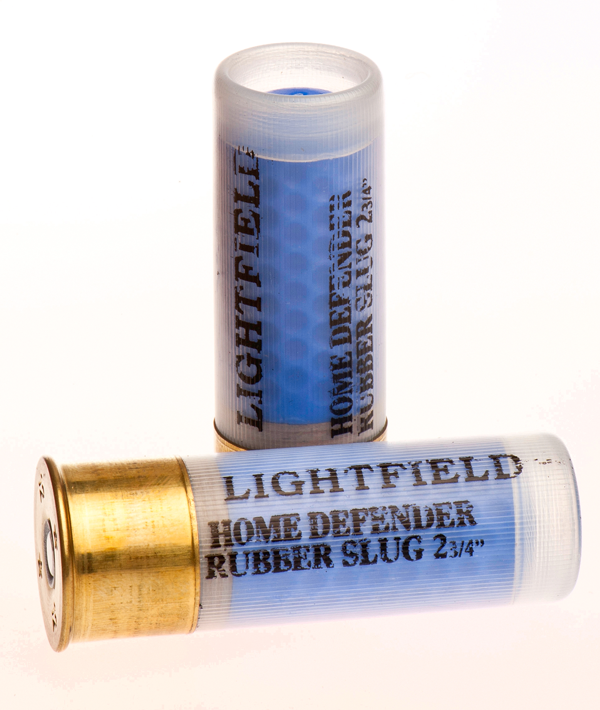 Greatly reducing the risk of wall pass-throughs and even lethality, while ensuring an anchoring transfer of energy to an immediate threat, Lightfield’s Rubber Slug is a 12-gauge 130-grain projectile that leaves the muzzle at 600 fps. Designed to be nonlethal when fired at a distance, the load can penetrate a body at extremely close range and can be lethal in those situations. (www.litfld.com)

Editor's Note: This article originally appeared in the August 12, 2013 edition of Gun Digest the Magazine.