Gun Digest
Home Gear & Ammo A Ring For Every Occasion: Scope Rings And Base Systems

A guide to scope rings, base systems and other scope-mounting solutions.

I’m so accustomed with Mr. Murphy and his Law that I swear we’re somehow related. This concept has been affirmed time and time again throughout my life, especially in those situations where what would normally be an easy fix is rendered unfixable.

I like rifles that are nearly indestructible, sturdy boots of stout construction, rugged riflescopes and mounts and rings that won’t let me down. I’ve had bunches over the years, and all have their good and bad points.

There are all sorts of mounting systems constructed of different materials and in a multitude of conformations. What may be ideal for the target shooter could quite possibly be unacceptable for the mountain hunter, or what works perfectly on a light-recoiling varmint rifle will fall to pieces on a dangerous game rifle. 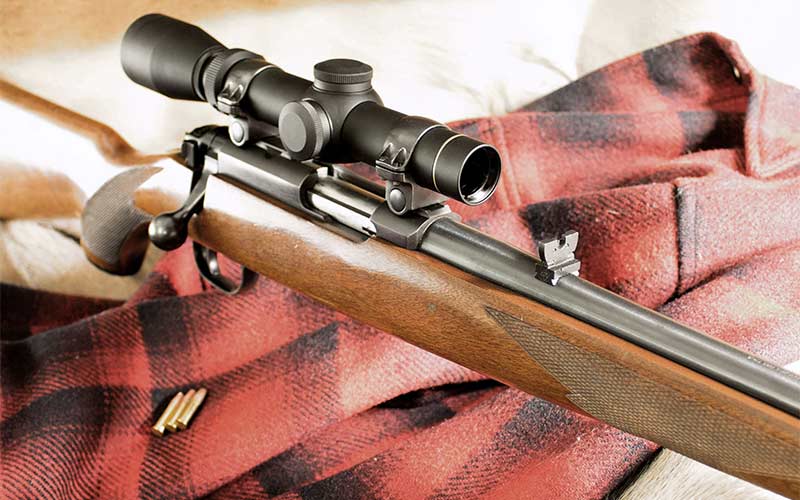 The first rifle I ever owned was a gift from my dad—affectionately known as Ol’ Grumpy Pants—when I was a boy of 14 years. It was a Ruger Model 77/22 and remains my favorite rimfire rifle. Chambered in .22 LR, the Ruger rifles came equipped with a set of proprietary steel rings, which represented an intrinsic value to my father: They screw right onto the receiver; there’s no monkey business.

The ring was split horizontally, with the bottom part mating to the recesses in the receiver via a large slotted nut, and the top of the ring using four slotted screws to secure the two pieces together. They work well when properly installed, and I’ve seen them hold zero well even when subjected to magnum recoil from cartridges such as the .300 Winchester Magnum, .338 Winchester Magnum and .458 Lott.

I like the system and, as the mount/rings are included in the cost of the firearm, they do add value to the gun. If I had to find a complaint, I’ve seen a good number of Ruger rings with severely stripped screw heads, and I’ve seen the large nut come loose more than once. But, overall, they work rather well.

Growing up, the most popular mounting system I encountered was the Weaver base/ring combination. Using machined aluminum or steel bases and steel rings, they were plentiful, attainable and affordable. The cross-slot Weavers were on almost everyone’s rifle, and while they might seem a bit archaic by today’s standards—especially in comparison to some of the modern designs—the deer fell just the same.

The Weaver system remains viable and has undergone a face-lift over the years, including steel bases, Picatinny rails and Grand Slam steel bases (designed to mitigate severe recoil). Grumpy Pants bought a set of Weaver tip-off mounts and rings for his Mossberg 800A .308 Winchester to hold his Redfield Lo-Pro 3-9x with the TV rear ocular, which has accounted for more deer than I’ll probably ever shoot, and that system still works to this day. You don’t want to be within 250 yards of that man with that rifle he’s spent the last half-century with.

The Weaver system used to suffer from weak mounting screws—I’ve seen several mounting screws sheared off from heavy recoil—but, of late, it seems to be corrected.

I recently set up my .280 Ackley Improved Savage Long Range Hunter for a Namibian safari with Weaver mounts, and it held zero perfectly, despite traveling halfway around the world. Weaver continues to produce a very wide selection of bases and rings, meeting almost every need in the shooting world. There are steel dovetail rings, skeletonized aluminum rings, detachable models, six screw variants and more in addition to the Sure Grip model, which remains so popular.

Leupold bases and rings were another popular choice, though in my circles, they were reserved for those with a larger hunting budget. Leupold’s steel bases and dovetail front ring, with the rear ring with adjustable windage, have become a staple in the shooting world. I’ve had them on many different rifles.

These rings—when installed properly and torque to the specified values—can be a wonderful choice, giving a lifetime of service without needing much attention. I’ve seen that rear mount come loose on a hard-kicking .458 Magnum, but the same design held up well to .375 H&H and .416 Remington Magnum recoil. Their dual dovetail rings are rock solid—my Winchester Classic .300 Win. Mag. still uses these to hold a VX-6 2-12x scope—and their Quick Detachable mounts and rings hold up very well to any level of recoil.

Using Torx-head screws for attaching both bases to the receiver as well as to secure the rings halves, they have proprietary models, as well as models in the Weaver cross-slot/Picatinny design. Leupold’s Backcountry model features an integral base/ring system to increase rigidity while reducing weight, being made from aircraft-grade aluminum. These are an excellent choice for those mountain hunters who count ounces.

Burris makes excellent rings and bases, with some innovative features, which may help achieve the accuracy you’re after. Burris Signature rings use their proprietary Pos-Align inserts to help maintain full contact on the scope tube, properly aligning the riflescope so the scope can “go to sleep” in the mounts. They offer rings in 1-inch, 30mm and 34mm diameter, with bases available for a good number of different rifle models, from hunting to target to tactical models.

I’m an unabashed fan of Talley Manufacturing, having used their rings and bases for a number of years. Their vertically split steel rings are machined to extremely high tolerances, their steel bases are equally precise, and the combination of the two have been wonderfully consistent. I review a good number of rifles each year, and early on, I noticed that each time I’d mount a scope in Talley rings and bases it’d take very little adjustment to zero the rifle.

Talley’s stuff is consistently fantastic, and if the user adheres to the torque requirements specified, no further adjustments should be needed. I’ve taken rifles equipped with Talley rings and bases all over the world with me, and they’ve never failed. They have models available for nearly any rifle—including the CZ and Heym rifles that require an integral ring to match the receiver—and their Quick Detachable Rings with Lever are a great choice for those hunters who wish to detach their riflescope in order to gain access to the iron sights, or for those who wish to circumvent Mr. Murphy and have two different riflescopes, pre-zeroed in rings, for those remote adventures.

Talley’s Lightweight Alloy Scope Mount is an integral base/ring combination, CNC machined from 7000-series aluminum alloy to both help maintain the fine balance of a hunting rifle, as well as reduce rifle weight for those hunts where the ounces truly count.

I’ve never had to lap Talley rings, as they’re machined to such tight tolerances that it was unnecessary, and I’ve never had an issue attaining a proper zero, with the scope staying generally within the center of its adjustment range. Whether it’s a vintage hunting rifle, a tactical target rifle—Talley’s tactical Picatinny rings are a fabulous choice—or your chosen dangerous game gun, there’s a choice in Talley’s lineup that’ll suit your needs perfectly.

Warne rings and bases are a solid choice as well. They too offer a vertically split steel ring, but with a square recoil key to mitigate the effects of recoil. Warne offers these rings in both a detachable and a permanent attach model. They’re simple to install and, in my experiences, hold zero very well. Like any ring/base combination, the screws will need to be properly torqued for best performance. Warne rings are designed for use with their proprietary bases, or for use with Weaver bases or Picatinny rails.

There are many other manufacturers, with similar designs to those I’ve outlined above. For the multitude of MSRs on the market—whose Picatinny rails allow the use of a good many different rings—the possibilities are nearly endless, though the major manufacturers will assuredly offer a sound design for these rifles.

And, for the long-range target crowd, there are number of bases that’ll give additional elevation to extend the range of your chosen cartridge/bullet combination. Sometimes, an additional 20- or even 40-MOA can make shots out beyond 1,000 yards much easier.

So, Is One Scope Ring Best?

So, what’s the proper choice for your shooting situation? For my hunting rifles, I prefer a system that’ll allow me to mount my chosen scope as low to the bore as possible, so I can quickly attain cheek weld on the stock as quickly as possible, from almost any field position. I also appreciate a mounting system that’s utterly reliable, especially when I’m traveling to the remote corners of the world. I rely heavily on Talley’s rings and bases; they’ve never let me down, no matter if I was using the fixed model or the detachable model.

I don’t use Loctite or anything of the sort, rather relying on a set of Fix-It Sticks to adjust to the proper torque. Again, in spite of the best efforts of the baggage handlers and their mentor Mr. Murphy, my rifles have traveled the globe without issues when using Talley’s products.

For bases, I generally prefer the two-piece variety, in order to allow spent cartridges to be ejected freely, with no chance of getting hung up on a one-piece base. If it’s a lightweight rifle with the mountains in mind or a light-recoiling gun, Talley’s Lightweight Alloy Scope Mount checks all the boxes for me. The precision of their rings removes the need for lapping, and all of my scopes mounted in this ring/base combination hold zero and give no cause for concern.

For target rifles—where the comb is frequently adjustable to match the scope height—the game will change. This is where the benefits of the 30, 34 and 35mm tubes will be seen, as their adjustment ranges will give the most elevation to achieve the trajectories needed for extreme long-range shooting.

And, as even the most minute shift in point of impact at close ranges will be magnified at extreme long ranges, you want the most rigid and rugged set of bases and rings available for your target gun. I like a wide ring for this purpose, often with six screws per ring, in order to keep the heavier target scopes where I put them.

Not Just Nuts And Bolts

It used to be that scope mounts never even received an afterthought and were considered nothing more than the “nuts and bolts,” which were used to screw the scope onto the rifle. With companies like Conetrol coming onto the scene as early as 1964, shooters slowly became enlightened to the benefits of precision machining and as scope technology improved (it has come leaps and bounds in the last half-century), the importance of quality bases and rings has become ever more evident.

Take a look at the various choices out there and find what works for your particular shooting situation. Having a rock-solid mount for your optic will remove one of the sources of concern in your shooting gear and will make you a better shooter. Grab a torque wrench, some new bases and rings and shoot more confidently.

Editor's Note: This article originally appeared in the June 2021 issue of Gun Digest the Magazine.