What Are The Best Rimfire Scopes:

When it comes to optics, “rimfire” is a nebulous term. The scope torqued onto a child’s first .22 LR isn’t anything like the feats of ELR engineering found at precision rimfire matches all across the country. Yet, in both cases, they’re riding a rimfire rifle, steering the fire of a 40-grain hunk of lead. This shows that when picking a new scope for a rimfire rifle, you have to consider end use. Is the rifle a plinker, a hunter or a precision competitor?

There are a few “rimfire” branded scopes that aren’t total junk—okay, just two—that work well for backyard plinkers and varmint hunters. For match shooters, the best rimfire scopes are simply the best precision rifle scopes, no matter the caliber. Taken together, these 11 scopes below are my favorite, listed in order of price, with the recommended use case for each one. These scopes range from under $200 to more than $3,500 … and none of them will let you down. The 22 FIRE is one of two “rimfire” stamped optics worth a lick. (The second being the Hawke, listed next.) The BDC reticle is optimized for high-velocity ammo like CCI Stingers. Zero with Stingers or similar 1,400- to 1,600-fps loads at 50 yards and the hash marks show where to hold (more or less) out to 150 yards in 25-yard increments. It’s my go-to plinker scope for newbie shooters. The hashmarks being an easy way to explain bullet drop to new shooters. This is a “rimfire” scope in the realist sense—inexpensive, but not cheap. I’ve long wanted to build a custom sporter with a chamber cut for Stingers and top it with this scope. Some day. MSRP: $174; TractOptics.com Like the Tract above, this Hawke has a BDC reticle, but with hash marks tuned to .17 HMR. It’s the only reticle out there marked as such. With a 100-yard zero, it shows holdovers to 350 yards when on 13x magnification. Hawke says the aim points are precalculated for 2,500-fps loads. It’s worked well for me out to 300 yards with CCI VNTs (listed at 2,650 fps) in a Tikka T1x MTR. If the BDC isn’t your jam, this model has big-honking MOA turrets for elevation and windage adjustments. If you want a rimfire reticle for the .17s doing distance plinking or varmint work, Hawke is where it’s at. They make this scope and a few others with reticles for .22 LR subsonic, .22 LR high-velocity, 17 Mach 2 and .22 WMR, too. MSRP: $399; US.HawkeOptics.com You can’t do anything in the rimfire space these days and not bump against NRL22, the National Rifle League’s national precision rimfire series. In that sport, among base-class shooters whose combined rifle and scope MSRP can’t exceed $1,050, this has long been the most popular scope. Spend a few minutes behind the Argos, and the reasons are clear. The parallax runs down to 10 yards, it’s a 30mm tube with first focal plane (FFP) internals and illuminated reticle all for a real-world price around $300. If there’s a better deal anywhere, I don’t know what it is. Shortcomings on this one are clarity and low-light ability, but a typical NRL22 match is run late morning or early afternoon, so brightness or lack thereof is never a factor. The Argos BTR works great. If you’re looking to get into precision rimfire shooting on a budget, this is one of three scopes to consider. MSRP: $379; AthlonOptics.com The Diamondback Tactical from Vortex fills the same need as the Athlon above, but for about $100 more. That extra Benjamin buys you noticeably clearer glass and a Vortex industry-leading, no-questions-asked warranty. At the NRL22 match I directed in upstate New York, the number-one question I’m asked by new shooters is, “What scope should I get?” My number-one answer is this Vortex. I’m particularly fond of the intuitive EBR-2C (MRAD) reticle, which packs a lot of information into a clean sight picture. It has FFP guts like most modern precision optics, but there’s a second focal plane model in 4-12x40mm that some of the “old guns” shooters in my NRL22 club have leaned into. Older eyes can struggle with an FFP reticle like the EBR-2C at low magnification. MSRP: $499; VortexOptics.com As the new kid on the block, Bushnell is the new title optics sponsor for NRL22 and much of the marketing push behind that new partnership centers around this scope. The 30mm tube has 18 mils of windage and elevation, so with a 30-MOA rail it makes a fine ELR optic, too, with enough guts to hit with a .22 LR to about 400 yards. The Christmas tree-style Deploy MIL reticle is first rate, if a little busier than the Vortex, with heavier stadia lines that older eyes might like. Much more so than spinning in elevation, NRL22 is a game of running the reticle. My guess is this will be the new dominant base-class tube—and for good reason. The glass has a sharpness to it, and I expect savvy shoppers will soon be able to find them online for less than $400. MSRP: $449; Bushnell.com 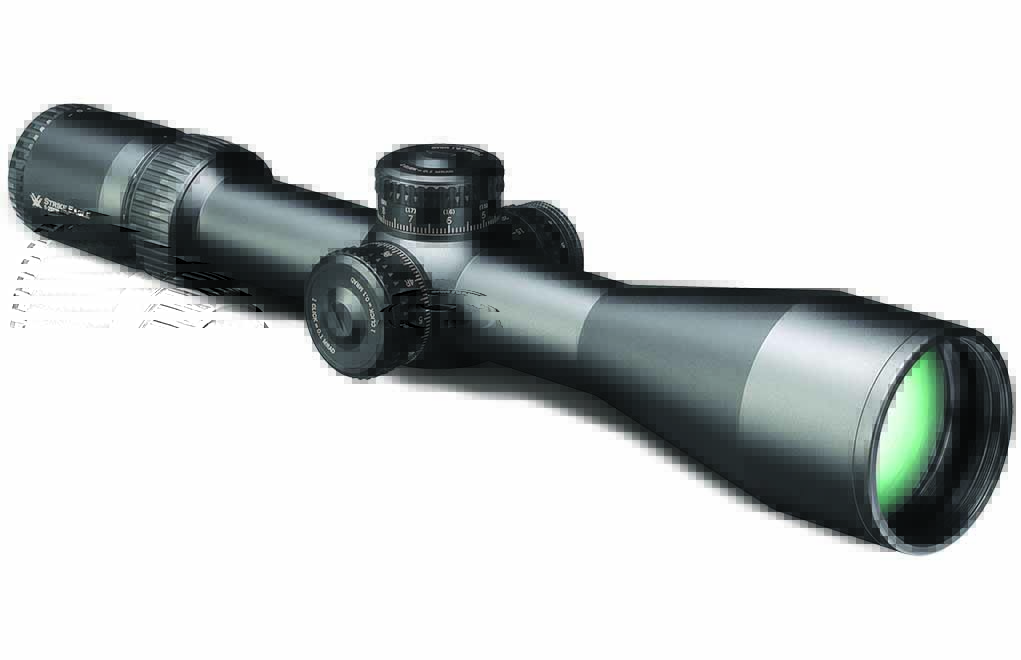 To call this new optic from Vortex a “budget” or “price point” scope will make a lot of people groan. After all, $800 is no small sum. But what Vortex has done is pack features found in scopes that cost two and three times as much, making it accessible to the rest of us. For extreme long-range shooting, riflescope tubes have ballooned from 30mm to 34mm, and this new scope from Vortex is the best 34mm optic out there for less than a grand. You’re getting good glass, 25x magnification, the famous Vortex warranty and a crazy 31 mils of elevation. With the right rail and some knowhow, you can get on steel with a .22 LR to 500 yards with this sucker. (I did just that recently, with the Strike Eagle riding a 30-MOA rail atop a Zermatt RimX action with a Proof barrel.) Whether for rimfire or centerfire ELR, Vortex is going to sell a pile of these scopes. MSRP: $799; VortexOptics.com 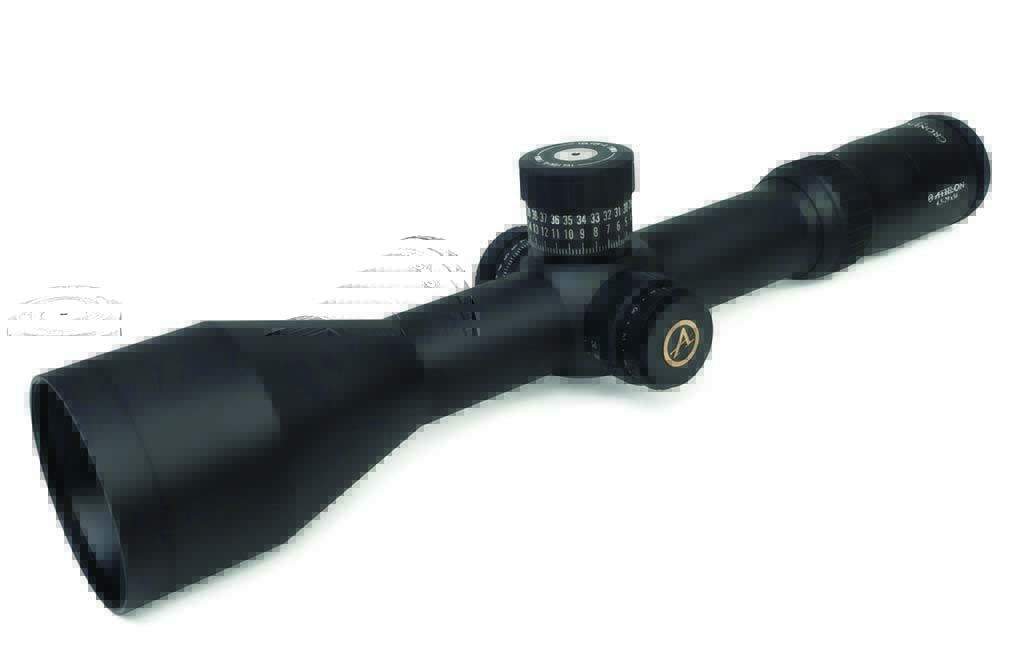 Don’t let the MSRP of this monster scope from Athlon deter you. While the MSRP looks high, it’s listed correctly here between $800 and $1,600 options. Athlon’s business model works something like this: Build a great scope, put a high MSRP on it, slash the price by 40 percent or more online. So, this listed $1,999 scope can be found in many places for $1,200 or better. But, enough about money. The Japanese-made Cronus BTR is as good as PRS scopes that cost twice as much. When shopping for “a sky’s the limit” optic for a Vudoo Gun Works .22 LR in a JP APAC chassis setup strictly for ELR work, this is what I bought. With the Nightforce ATACR (also listed), it’s possible to get more top-end magnification and maybe the best glass on Earth. But is the Nightforce three times better than the Cronus BTR? No way. This is a do-it-all precision rifle scope worthy of the very best rifle builds, and compared to the competition, it’ll save you at least a grand in the process. MSRP: $1,999; AthlonOptics.com Maven built its brand on direct-to-consumer hunting optics with an incredible price-versus-performance ratio. The RS.3 does exactly that, with a high-wattage 30x magnification on the top end in an impressively compact package. (At 13 inches long and 26 ounces, it might be the most compact 30x scope out there.) Because of its size, I put it atop a CZ 457 Premium re-barreled with a stainless Lilja in 17 Mach 2. It’s among the best-looking, best-performing snipers of tree squirrels ever created—not that I’m biased or anything. (See, Shea’s CZ 457 story on page 58.) This year, Maven introduced a 34mm version of this scope—the RS.4—which does everything this hunter does and more, with the edge on match shooting. They aren’t cheap, but on a go-for-broke small-game rimfire rig, they’re my favorite option. MSRP: $1,600; MavenBuilt.com Budget be damned. If you’re building a custom .22 LR with the likes of a Vudoo, RimX or the Ultimatum Deuce, and you want the very best long-range precision riflescope, this three-year-old ATACR is still it. At the NRL22 Nationals in 2019, five of the top seven open-class winners ran this big beast of the ATACR. (It’s equally at home—and was designed for—big centerfire rigs and is a favorite of King of Two Miles shooters.) Yet the parallax on this bad boy spins down to 10 yards, making it as dominant in-close as it is way out. The ATACR line from Nightforce is widely considered the current peak of small arms optics engineering. This is the peak of the peak. MSRP: $3,600; NightforceOptics.com This new riflescope from Nightforce represents the bleeding edge of precision optics. The 8x erector allows for that incredible 2.5-20x magnification window, making it the ideal price for a no-concern small-game scope or a compact PRS wonder. And compact it is. With a 30mm tube, the NX8 measures 12 inches long and weighs just 28 ounces. Thanks to the wizards at Nightforce, you’re not losing any real elevation in that 30mm tube compared to most larger 34mm scopes. The NX8 has 32 mils of elevation adjustment. There’s a first-focal-plane model, the F1, and also a second-focal model, the F2, which older eyes can appreciate. Nightforce made its name by pushing optics innovation forward. The NX8 keeps that tradition alive and well. MSRP: $1,950; NightforceOptics.com