There's no shortage of 300 Blackout ammo options, we share our six favorite—both super- and sub-sonic.

What Are The Best 300 Blackout Ammo Options:

The quiet child of the 5.56 NATO, the 300 Blackout is mainly thought of as a specialist. Slap a can on your rifle and the short .30-caliber whispers hell downrange. Perfect for special operations and other clandestine applications.

True enough, the roots of the cartridge are firmly planted in this brand of action, but as a mature and widely-accepted AR-15 option it’s branched out to many other uses. Deer hunting, home defense, even plain old plinking. Have a reason to pull the trigger at short-medium or close range, the .30-caliber most likely fits the bill. Especially with today’s choices of 300 Blackout ammo.

Today, we look at six of our favorites—both super- and sub-sonic—for three popular applications of the cartridge. Suppressed or unsuppressed, these options will get you on target. Up to whitetail deer, Barnes has nearly the perfect 300 Blackout ammo. Across all calibers, VOR-TX ammunition has built a solid reputation but especially shines in the Blackout. The excellent penetration expected out of solid-copper projectiles, combine with the ability to expand at the cartridge's middling velocities, is a potent mix. Much of the bullet’s terminal consistency is thanks to a specially designed nose cavity, with mushrooming hastened on by its polymer tip. The nose cone also makes the projectile a ballistic wunderkind, with a .358 ballistic coefficient (BC). Not to mention, at 120 grains, it’s an exceptionally pleasant round to shoot. Quick on follow-ups, too. Barnes offers a lighter option—110 grains—which is ideal for smaller fair such as coyotes and varmints. Limited in effective range, hunters are best served by super-sonic 300 Blackout ammunition. However, there are times the hushable fodder excels in the field. Up-close hog busting, for instance. Go this route, bullet design becomes imperative, which is why we favor Sig’s sub-sonic hunting option. A wide polymer tip ensures consistent and devastating expansion, even at the low operating velocities of this class of ammo. While the step-side design is mainly to ensure a full 30-rounds in a standard AR magazine, it also plays a role in excellent terminal ballistics, ensuring the core and jacket don’t separate in the target. As to suppressibility, it’s excellent.
Sig pushes it, however, loading the round to the cusp of super-sonic—1,000 fps muzzle velocity. Despite the close-quarters cred the 300 Blackout brings to the table, ammo tailored for defensive purposes are few and far between. Speer Gold Dot is a marked exception. Optimized for expansion at a range of velocities out to 200 yards, the 150-grain load (.330 BC) is the ideal up-close option to protect hearth and home. Particularly nice, Speer has optimized Gold Dot to perform out of shorter-barreled rifles, down to 10-inches, ensuring top performance out of the most nimble platforms. Similar to the handgun line, the 300 Blackout ammo features bonded-core bullets, which eliminates the No. 1 cause of bullet failure—jack and core separation. Additionally, the design feature ensures impressive weight retention once at its terminal destination, as well as through common barriers, such as auto glass. 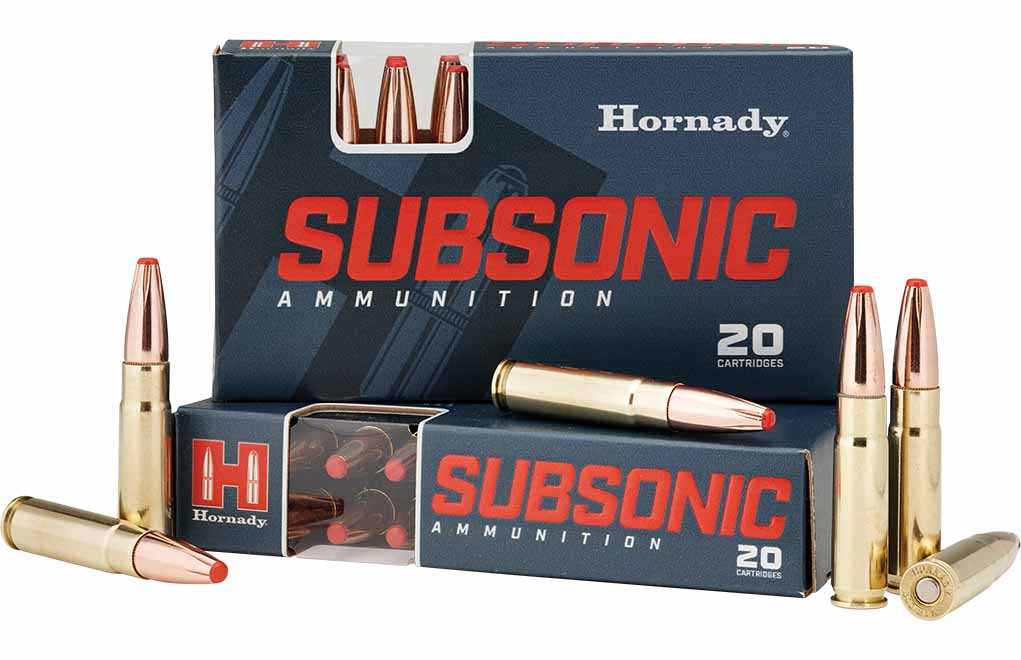 Sub-sonic 300 Blackout ammo, in many respects, is an ideal home-defense option. Highly controllable, with a reduced muzzle flash and next to nothing in recoil, the suppressible stuff allows for fast and accurate close-quarter hits. Making certain those hits count, Hornady Subsonic Ammunition (.437 BC). The 190-grain load features the ammo company’s XTP bullets, engineered for lower velocity performance. Much like Hornady’s Critical Defense handgun ammo, the projectile utilizes a Flex Tip insert in its hollow-point cavity. Resisting fouling from clothing or other material, the polymer ensures the reliable and explosive expansion shot in and out. Also aiding in Hornady Subsonic’s performance is a flat, energy dumping tip, as well as long skivying in the jacket, allowing for controlled expansion. Loaded for a 1,050 fps muzzle velocity, keeps the cartridge’s report very suppressible, while delivering plenty of energy on target. 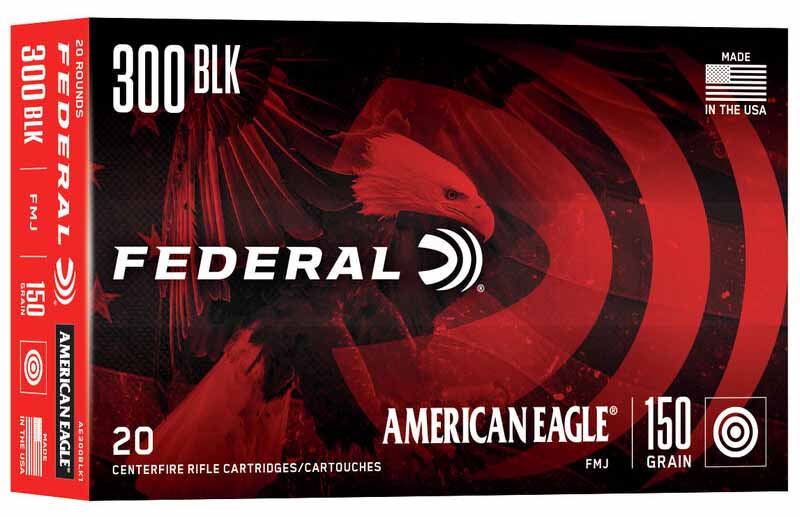 As usual, American Eagle offers up an excellent choice for range fodder. There isn’t a ton to talk about in its 150-grain load (.406 BC), it’s what most shooters would expect out of a full-metal jacket, boattail target option. Federal loads it respectably, with an average muzzle velocity of 1,900 fps, which combined with bullet weight creates a fairly accurate load out to 200 yards or so. Best of all, American Eagle is typically inexpensive (outside ammo runs such as 2021). There’s no need to pitch premium sub-sonic when messing around at the range. Magtech’s affordable 200-grain suppressible FMJ load (.560 BC) frees shooters from breaking the bank when sharpening their skills. Loaded with a 200-grain FMJ bullet and loaded to 1,050 fps muzzle velocity, the load offers short-mid and close range perform that’s easily hushed up. Magtech anneals the cases as well, offering more consistent performance shot to shot and longer case life for those who reload.