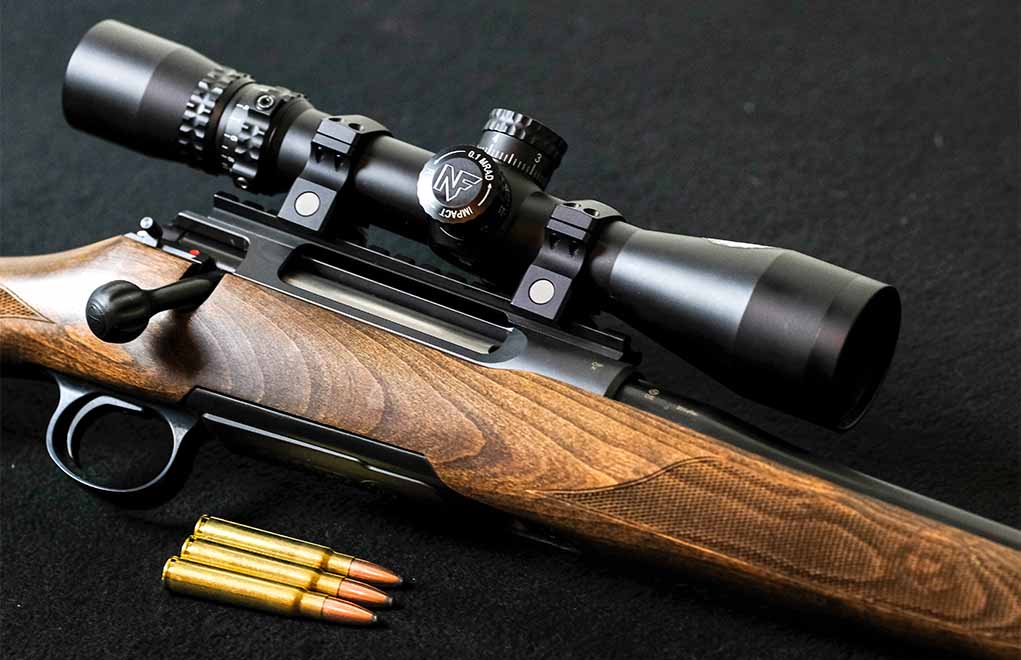 Find the 8mm Mauser ammo that gets the old warhorse running like a thoroughbred.

Before the 7mm Remington Magnum and certainly the 6.5 Creedmoor, American shooters were typically shy of metric cartridges. Let them across the pond fiddle with those. Except, maybe, the 8mm Mauser.

Certainly, the old Teuton military cartridge (AKA the 8×57mm) never scrabbled up the support of the all-American .30-06 Springfield. The .30-caliber outperforms the 8mm in most ways, so it’s understandable. Even so, the Mauser had enough allure it developed a respectable and enduring following stateside.

More frontal area on its bullets than .30-calibers, the 8mm hits like a bone-rubbed hickory stick. The trait also gives its projectiles excellent expansion characteristics. What many found that added up to a cartridge fit for nearly all North American game, shy of coastal brown bears and such.

Things have only gotten better for the German standby. Advancements in powders, bullets, cases and primers have improved ammunition across the board. And 8mm Mauser fodder hasn’t been immune.

Before We Talk 8mm Mauser Ammo

For the most part, European ammunition names are fairly straight forward—bullet diameter followed by cartridge length. The 8mm Mauser is the noted exception, starting with its popular name. Technically it’s not 8mm (7.92mm) and wasn’t designed by Mauser. No sir.

As Jay Pinsky points out in his excellent exploration into everything 8mm, Mauser is a misnomer, given “the cartridge was developed by a German military commission at Spandau Arsenal for a forerunner of the famous Mauser rifle, which was adopted in 1898.” Rationally, the Mauser moniker stuck because of the Mauser-designed rifles chambered for it—most notably the Karabiner 98k.

The naming confusion doesn’t stop there. At times and places the 8mm Mauser has been known as the:

Even its modern designations make things clear as barrel fouling. American SAAMI calls the cartridge the 8mm Mauser or 8×57mm and European C.I.P. the 8×57 IS.

IS? The letters often following the cartridge’s name, there’s another nut to crack. You see there is more than one bullet diameter for the 8mm Mauser and style of case. The thumbnail on diameter, the Germans tweaked the original .318 to .323 in the early 20th Century. Both are still made. Furthermore, given the Teutons propensity for break-action drillings and double rifles, the 8mm Mauser comes in both rimless and rimmed flavors.

Here’s how the letters shake out:

Hold up, what about C.I.P’s IS? Sigh. Figures you’d catch that. I’ll let Pinsky explain: “The ‘J’ in the name stands for ‘Infanterie.’ The ‘J’ is due to a mistake resulting from the previous use of gothic letters in Germany and has no significance regarding bullet size.” Font confusion early on stuck in some parts, not in others. Keep it simple, remember “J” equals “I” when shopping around and Bob’s your uncle.

To our ends, we’re only concerned with one particular variation of the cartridge, what we Yanks know as the 8mm Mauser—what across the pond is known as the 8×57 IS. The kind that will run in a turn bolt with the most common bullet diameter. If you own a drillings rifle, sorry, this isn’t the article for you. Those who know Nolser know the tale. Company founder John Nosler had a devil of a time putting down a moose with old cup-and-core bullets. They just wouldn’t penetrate. In turn, Nosler built a better mousetrap so to speak—the Nosler Partition bullet.

Running a copper partition two-thirds of the way through the lead core of a soft-point bullet, Nosler concocted what many consider the ultimate hunting projectile. It expands at low velocity, but doesn’t shatter at high velocity. Peace of mind achieved.

Nosler still turns out 8mm Mauser ammo with the wunderkind bullet. Unfortunately it’s in their small-batch Nosler Custom line. Thankfully, the 200-grain load (.426 BC, 2,474 fps MV) comes in relatively affordable compared to other offerings in that corner of the catalog.

The handloaded stuff is a bit much for whitetail, but just about perfect for short to medium range shots at elk and moose. Great option if you hunt dark timber. Prvi Partizan (PPU) has made plenty of headway in the American marketplace over the past few decades. Lucky for the American shooters, the Serbian gun fodder is generally affordable, accessible and features interesting engineering twists. None more so than one of its predominant hunting bullets.

The Grom Thunder is a majority copper alloy projectile, but not lead-free. Instead of going the polymer-tip route, PPU tips it with a soft lead, running a narrow channel of the metal into the heart of the bullet. The results are impressive. Even a low velocity, compression of the malleable core ensures the bullet expands to create wound channels that put game down. The stuff is tough as nails to boot.

As far as 8mm Mauser ammo is concerned, Grom Thunder is available only in 185-grain loads (2,161 fps MV). However, given the bullet's construction, it punches above its weight and comes in as a do-all against most North American medium to large game. One drawback, it's not exactly brimming on ammunition shelves.

Get More On Mauser: Chances are your granddaddy harvested some backstraps with this stuff. Not 8mm Mauser, but Power-Point. Developed around 60 years ago, the bullet has perhaps put more deer down than any other projectile. Safe to say, it has time-tested writ large on its resume.

Essentially, you get a “traditional” hunting bullet with Power-Point—an improved cup-and-core design. Nope, not bonded. But never fear, cannelure holds its jacket to the lead core, keeping the projectile from coming apart at its terminal destination. It expands like the dickens and dumps a ton of energy quickly, too.

Given these traits, especially with the weight Winchester loads its 8mm Mauser ammo, it’s probably not appropriate for larger North American game. But for deer and pronghorn, the 170-grain Power-Point (.205 BC, 2,360 fps MV) will do its job … and well.

It’s also common as Kentucky bluegrass. This is a great advantage over some of the other ammo picks; not only is it effective, but it's also accessible and generally affordable. Another steak-and-potatoes deer-season option. What Power Shok lacks in bells and whistles it more than makes up for in performance. Chances are you don’t need a premium bullet to fill your whitetail tag—or mule deer tag for that matter. You simply need something that works … every time. That’s Federal’s cornerstone hunting ammunition.

Again, we’re talking cup-and-core bullets that hang tough versus deer, hogs and other medium game. What sets Federal’s blue-collar bullet apart is its reputation for accuracy. It’s well deserved as most find out when dialing in their rifle. Given most shots at deer come 200-yards in, hair-splitting accuracy isn’t exactly a must. But having it at hand does provide a heap of confidence.

With the 170-grain (.354 BC, 2,250 fps MV) 8mm Mauser ammo, hunters get a best-in-class BC and velocity to spare, making it an ideal medium-range load. And one you won’t lose your mind rounding up. It’s available nearly anywhere that sells ammo. So, let’s talk about those bullets. There a concoction of Wilhelm Brenneke, German firearms and ammunition inventor, whose company still bears his name. (You might know their shotgun shells.)

The idea is the kind-of-sort-of semi-wadcutter design cuts a sharp edge in whatever it passes through—meat or paper. Dubious perhaps. The soft-point should mushroom back to the ledge, thus mooting the feature. What’s not debatable, is the design’s superior mechanical lock-up between jacket and core compared to most other cup-and-core bullets.

What the Czech ammo-maker calls a semi-jacketed soft-point (SPCE) flies well, too. Certainly, it’s not a match option by any stretch of the imagination, but is streamlined enough to hold steady for medium-range shots. At 196-grains (.328 BC, 2,592 fps MV), the 8mm Mauser ammo is tilted toward large game, but closer in. Entering and in World War II, Germany was dedicated to the sniper concept. Thus, the Wehrmacht outfitted its sharp-shooters with ammunition that could go the distance—a 198-grain load topped with a bullet with an impressive .593 ballistic coefficient. Hornady’s 8mm Mauser match ammunition just misses this mark, but not by much. Loaded for a 2,500 fps muzzle velocity and boasting a respectable .525 BC boattail hollow-point, the stuff can reach out to the limits of the caliber and print small. Want to stretch your 98K’s legs or just punch paper for the afternoon? Sellier & Bellot has you covered with its 196-grain FMJ (.509 BC, 2,550 fps MV). It’s not quite as ballistically adept as Hornady’s 8mm Mauser ammo. Then again, the Czech company doesn’t bill it as a match option. The nice thing about S&B’s option, it’s fairly available. On top of that it certainly won’t break the bank.