Believe it or not, the 300 BLK has all the attributes to make it really well suited for hunting white-tailed deer.

Does the 300 BLK have what it takes to be a great deer cartridge?

When the 300 BLK became a made cartridge by Advanced Armament Corp (AAC) and Remington after being blessed by SAAMI in 2011, there was a lot noise and chatter about the launch of the new cartridge for the AR-15 platform. I didn’t get excited.

The short answer is that they are basically all the same cartridge with different names. The 300 Whisper is considered the progenitor to the cartridge. Most manufacturers of the cartridge have settled on calling it the 300 BLK. The fact the cartridge is offered in supersonic and subsonic loads also confused some hunters. What’s better for hunting?

I learned to hunt white-tailed deer by silently cocking back the hammer of a lever-action rifle and knowing the limitation of the .30-30 Winchester cartridge. Silence doesn’t spook deer, and a correctly placed shot leads to less tracking and more dragging. That caliber also helped me better understand trajectory in relation to bullet weight and velocity. Call it home-schooled ballistics.

While the AR-15 platform is about as far away from a Marlin or Winchester lever gun as you can get, I appreciate the AR-15 platform as a hunting rifle. That appreciation did not come quickly nor easily because the 5.56 NATO/.223 Rem. caliber, which is the caliber typically associated with the AR-15, is effective on wood chucks, ground hogs and coyotes — not game animal taller than knee high.

What I liked about the 300 BLK cartridge was that it used a .30-caliber bullet and was specifically designed to fit in the AR-15 platform. OK, I admit it: I was getting jazzed.

After using the 300 BLK at the range, I started to like it even if there were not that many ammunition manufacturers producing 300 BLK ammo at the time. Now that more factories are producing a variety of loads — both supersonic and subsonic — I was all in. At the range and through AR-15 platforms, I could easily shoot groups with match ammo that were sub-MOA. Recoil was mild. Muzzle blast tolerable. That’s sweet. 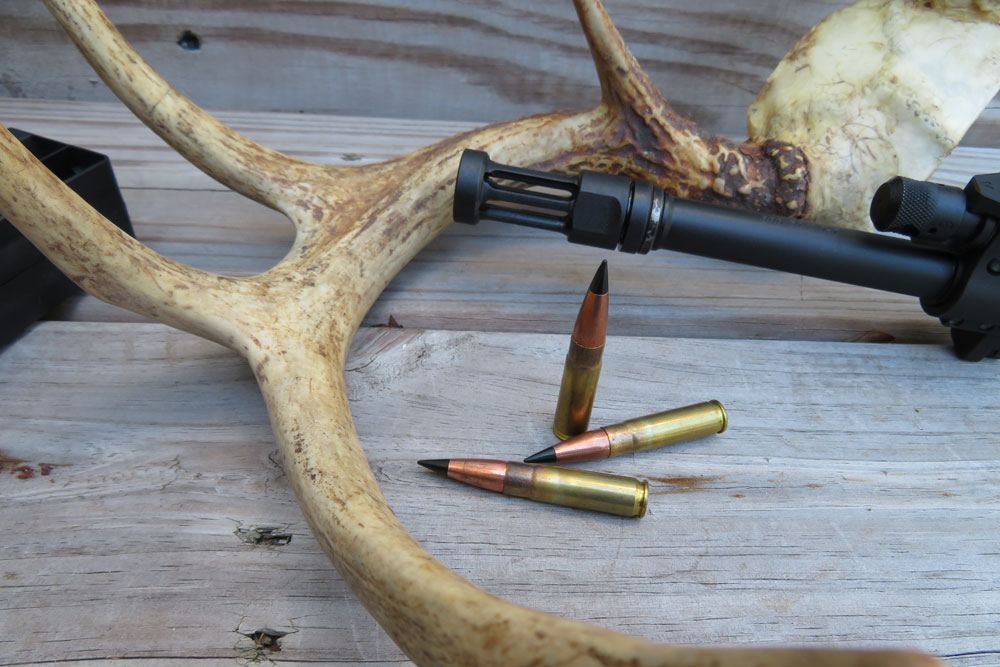 Quirky Cartridge, Surprising Accuracy
The 300 BLK cartridge itself is odd-looking, like too much bullet was stuffed into too little a case. The reason for this is the original 300 Whisper wildcat cartridge was designed to use lightweight bullets at supersonic velocities and heavier bullets at subsonic velocities. The 300 BLK was designed to provide ballistics similar to the Soviet 7.62x39mm cartridge in the AR-15 platform, as well as perform at super and subsonic velocities. Even though the round was designed for combat and defensive scenarios, and not specifically for hunting medium-size game, it offers excellent performance if kept within its range of effectiveness.

It’s also an accurate round. When I tested a Windham Weaponry RMCS-4 rifle in 300 BLK, my smallest group measured 0.28 inch with Sig Elite 125-grain Sierra Match King bullets. Not a hunting bullet by any means, but it’s an excellent example of the accuracy you can expect from the 300 BLK.

A hunter who knows the limits of the caliber being used and stays within its capabilities will be successful. Those hunters who blame a cartridge’s inability to kill are bad shots and/or shoot at distances where they have no business shooting. You know those hunters; they’re the ones who blame the caliber and trade up for .30-06, and when that doesn’t work, they buy a .300 Win. Mag. My shoulder hurts just thinking about those guys.

I put the 300 BLK in the same class as the .30-30 Win. and 7.62x39mm. Both are quite capable for deer hunting — I just don’t push the range farther than 125 yards. In my neck of the woods, which was in Northeast hardwoods, a typical shot at a deer was well under 50 yards. For still hunting in maples and oaks, the 300 BLK is quite effective. Now that I’m living and hunting past the Mason-Dixon Line and ranges are farther than up North in some cases, I still find the 300 BLK is a great choice.

Available bullets range in weight from 78 to 240 grains depending on the application. Lightweight 78-grain bullets are designed for close-quarters defense, while at the opposite end of the spectrum are 220-grain bullets loaded for subsonic velocities and designed for use with a suppressor. These are good for special ops work and hunting.

All 300 BLK bullets start out with decent velocity: 110-grain bullets crank out of the muzzle at 2,350 fps. Because the cartridge uses a large bullet and has limited case space for powder, the bullets tend to shed velocity more quickly than other .30-caliber cartridges.

For hunting, I stick with supersonic rounds loaded with 110- to 130-grain bullets such as Hornady’s Custom loaded with a 110-grain V-Max bullet. Out of a DRD Tactical CDR-15, I easily grouped three shots on average at 1.1 inches at 100 yards. Better yet, the DRD liked Barnes VOR-TX ammo loaded with 110-grain TAC-TX bullets. The DRD spit these into groups that measured 0.8 inch.

My Ruger SR-556 Takedown particularly likes the Barnes load. My best group with that ammo measured 0.41 inches. And I like the performance with these bullets. Other good choices I’ve used include Hornady’s Full Boar 110-grain GMX bullets and Federal’s Fusion ammo loaded with a 150-grain Fusion Soft Point. Sig’s Elite Performance 120-grain solid copper expanding bullets are also a good choice. LeHigh Controlled Chaos bullets were designed for maximum expansion with minimal pass-through and are loaded by LeHigh Defense as well as Underwood and Gorilla ammo in weights of 115 and 110 grains, respectively.

Suppressor Ready
Shooting subsonic ammo without a can is like wearing a rain slicker on a sunny day. What’s the sense? When you fire supersonic and subsonic 300 BLK ammo with a suppressor, you experience less muzzle blast, less recoil and less noise. With subsonic ammo, the noise and blast are substantially less, which enables shooters who are more affected by noise to get back on target quicker. That means you can see your hit on the animal, quickly recover from the shot, and deliver a speedy follow up if needed. Plus, if you hunt close to populated areas or have neighbors who don’t like the noise of gunfire, a suppressor is a very smart investment, as you will keep the noise level down.

You also don’t need a bullet that over-penetrates and could potentially hit and destroy something unintended. Farmers hate equipment with holes in it. Subsonic expanding-point ammunition is a smart move. Rifles with adjustable gas blocks, like the Ruger SR-556 Takedown, allow you to tune the rifle’s operating system to the cartridge. You might find that your AR does not cycle properly when shooting subsonic ammo through it. Make sure you run ammo through your rifle prior to a hunt.

Ed Schoppman, owner of Silent Legion, and his pal Dutch Moore, recently conducted a hunt out in Wyoming and used the 300 BLK with Barnes VOR-TX 110-grain bullets and Silent Legion’s 300 Blackout suppressor Model SL-BK with SRS (Suppressor Retention System). They tagged out on deer and antelope. The speedgoat was shot at a distance of 178 yards, and the deer were 120 to 165 yards. They used a typical 16-inch barrel on a DPMS lower. The “field test” was nothing short of an overwhelming success.

The New Deer Camp Companion
I haven’t had a chance yet to use the new Sig Sauer and Hornady subsonic soft point ammunition, but next deer season, you know what I’ll be hunting with. More hunters each year are embracing the AR-15 platform for deer hunting, and that means more deer camps will see the 300 BLK cartridge. The round is capable and adaptable to your hunting situations. I don’t think it is too soon to call the 300 BLK the next classic deer cartridge — or the next pig and antelope cartridge, either.