Is mounting a scope to a traditional lever-action rifle a sin? Or is the combination too useful to be constrained by orthodoxy?

Ashley Emerson, one of the founding partners of a company that would become known as XS Sights, once told me (and apparently a lot of other folks), “There’s a special place in hell for anyone who puts a scope on a lever gun.” I’m not sure condemnation to Hades is the right decree for anyone scoping a lever gun, but I do think Emerson’s opinion has some standing. A traditional lever-action rifle was never intended to have an optical sight. 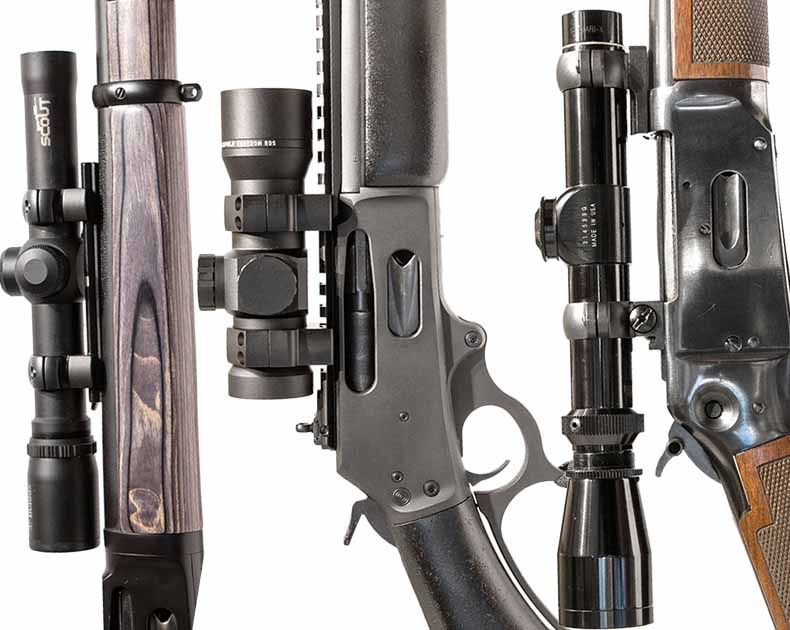 One of the true virtues of lever-action rifles is handiness. With its butt-heavy design, lever-action rifles can be hurriedly and efficiently snapped to the shoulder. Rifles of a more precision nature aren’t as handy and will be muzzle heavy, seemingly allowing them to hang on target. When you add any sort of traditional or scout-style riflescope to a lever-action rifle, its balance is shifted, and its handling qualities are sacrificed.

Lately, reflex and red dot sights are becoming popular on lever-action rifles. These sights provide no magnification, but like with more traditional scopes, they do eliminate the need to navigate three focal planes—the target, the front sight and the rear sight—and can improve a shooter’s ability to get hits faster. They’re also incredibly light so they don’t negatively impact the weight or balance of the lever gun.

Though I don’t completely agree with Emerson, I do believe that if it’s not done correctly, you stand the chance of only gaining a false sense of sighting enhancement. This is because the drop built into the stock of traditional lever-action rifles is extreme; it’ll only facilitate a perfect cheek weld when iron/open sights are used. The mounting of any optic raises the line of sight to the point a good cheek weld can be nearly impossible to obtain.

This is problematic in two ways. First, it inhibits the shooter’s ability to snap the rifle to their shoulder and immediately establish that good cheek weld that allows for precise eye alignment behind the sights. Additionally, by virtue of not being able to maintain a good cheek weld, the ability to accurately place shots suffers as does the capability to quickly recover from recoil for a second shot. It’s a matter of fact that in many cases the installation of an optical sight on a traditionally styled lever-action rifle can make it less efficient.

The easiest solution is to select a low-power variable scope that has no objective bell at all. Leupold has a VX-Freedom 1-4X20mm riflescope that can work but the large saddle where the adjustment turrets are mounted can interfere with ejection on Angle Eject (AE) style Winchester rifles if the scope is mounted extremely low. Leupold’s VX-3HD 1.5-5X20mm might be a better option, but with extremely low mounts the magnification adjustment dial and eye piece can interfere with the operation of the hammer.

This was the exact problem I experienced when attempting to mount a riflescope very low on a Winchester 94 Big Boy AE rifle in .307 Winchester. The ballistics of the .307 seemed to demand an optical sight to extract the most performance possible from the cartridge. But every scope I tried ended up in mounts so high I couldn’t obtain a workable cheek weld. The solution was an older Leupold VX-II 1-4X20mm riflescope with a small magnification adjustment dial that was supported in extra low Leupold traditional mounts. This allowed the hammer to clear the VX-II’s smaller magnification dial.

But I still had a problem; ejected cases were bouncing back into the action because they struck the windage adjustment turret/cap on exit. This seemed like an impossible hurdle to clear until I decided to rotate the scope 90 degrees to the left and use the windage adjustment for elevation, and the elevation adjustment for windage. The scope didn’t know the difference, and I was able to get it mounted incredibly low, with no ejection interference, while at the same time minimizing the negative impact to a good cheek weld.

Scout scopes—scopes with an eye relief of around 10 inches—have become popular for lever-action rifles because they don’t interfere with top eject models and because they’re out of the way of the hammer. Typically, they’re mounted on scout-rails like the lever rail from XS Sights. They provide Picatinny slots for scope mounting forward of the action. In the case of the Marlin mount, the rail begins at the rear of the action. With Winchester 94 mounts, the rail begins at the front of the action. With scout scopes, the size of the objective bell is generally not an issue. The diameter of the eyepiece, however, is an issue.

Another option is the Leupold VX-Freedom 1.5-4x28mm IER Scout Duplex scope. Though Leupold calls it a “scout” scope, with an eye relief of only 6 inches, it’s more of an intermediate eye relief (IER) scope as the name also implies. For best application, this riflescope will need to be mounted so that the long eyepiece extends over the action. And, since the eyepiece diameter is small—1.4 inches—the scope can be mounted with very low rings that won’t terribly compromise cheek weld.

If you want to mount a scout or IER scope as low as possible, you can also do what I did with a Marlin 1894. I sent it to Jim Brockman at Brockman Custom Guns and had Jim machine the barrel to accept the direct attachment of Talley rings. This method of scope attachment will work on many traditional lever guns. It does away with the need for scope bases, which ultimately increase the mounting height of the scope. Another option is to commission a custom mount from a gunsmith like Jerry Dove at Dove Custom Guns; I did this for another Marlin. Dove can make mounts extremely thin to help keep the scope as low as possible.

The other optical sight option for traditional lever guns is the reflex/red dot sight. In most cases, these can be mounted to the same lever rail a scout scope would use. Some can also be mounted to standard Weaver-style bases. And others, like the Leupold DeltaPoint Pro, can be had with a base that’ll affix to the drilled and tapped mounting holes in the top of Marlin lever-action rifles.

Unfortunately, all these mounting methods, especially those where a reflex sight is attached to a rail, tend to push the reflex height to the point that maintaining that good cheek weld can be problematic. The best option I’ve found for keeping the sight low is the mounting base for the Leupold DeltaPoint Pro on Marlin lever guns. I also believe that with some gunsmith help, certain reflex sights could be mounted directly to the top of the action on some lever guns without a mounting plate.

One optical sight option many may be overlooking for lever guns is the Leupold Freedom RDS 1x sight. Eye relief is unlimited, and the AR-style mount that comes with this red dot/prismatic sight can be removed and replaced with low or medium 34mm scope rings. Aimpoint has a collection of similarly designed and sized red dot sights that can be mounted reasonably low and in the same manner. The primary downside to all these dot sights is their lack of magnification. Their upsides are light weight, compactness and unlimited eye relief.

Of course, if you’re not all that concerned about destroying the handling characteristics so inherent to traditional lever guns, you can mount just about any riflescope you want. I once met a guy traipsing through the woods who had a 4-12×44 riflescope attached to his Marlin .30-30. It was even outfitted with target turrets. It looked as foolish as a saddle on a pig, but he seemed happy. And while I don’t think that fellow was headed to the underworld, I do think he would’ve been better outfitted with a much smaller optical sight, or even the factory iron sights that came with the rifle.

But of course, what does a hillbilly who has spent most of his life hunting whitetail deer know about lever guns?