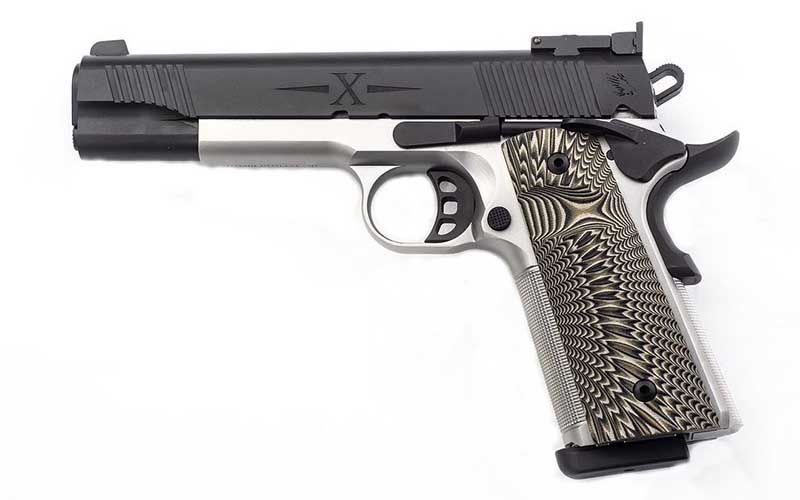 The 10mm 1911 typically commands a king's ransom, but not the six we hunted out.

Purists might scoff at the thought of a 1911 in any other caliber than .45 ACP. Difficult to argue against the proposition. John M. Browning came up with nearly the perfect pistol-ammunition combination lo those 100-plus years ago. However, if the heavy-metal sidearm is your passion, you most likely know there’s an equally, dare we say better chambering available.

While the 10mm Auto was not designed specifically for the iconic handgun its eventual marriage to the 1911 was a match made in heaven. Like any good couple, the cartridge and gun bring out the best in each other.

Heavy and accurate, the 1911 makes the snappy cartridge more manageable, enhancing its overall accuracy potential. And for its part, the 10mm endows the pistol with the trait most shooters cherish in the 1911—power, and plenty of it. Gad, who could want any more?

Thankfully, we live in an exceptional age when 10mm 1911 options abound.

True enough, many are expensive affairs running well north of the everyday marksman’s budget, making them prohibitive for many. Yet, there is life outside the confines of Wilson Combat, Nighthawk Custom and other top-shelf gunmakers. We’ve come up with six such specimens in our best 10mm 1911 options for tight budgets.

A brief word of warning. Budget-friendly is a relative term, especially when it comes to 1911 pistols. Manufacturing 1911s is more involved compared to many modern designs, given the machining and materials involved. In turn, the legendary firearm’s price basement isn’t as deep as, say, polymer striker-fired pistols.

Yes, there are economical 1911, you’ll see, but they still run more than what some are used to. For this particular buyer’s guide, we’ve set the ceiling at $1,200. Shop 1911s—in any caliber—you’ll come to find from that point down constitutes affordable.

Sure, the Bren Ten gets all the love for kicking off the 10mm craze, but the Delta Elite did the heavy lifting in keeping the cartridge alive. Minted in 1987 the 10mm 1911 was one of the few options in the chambering through the late 1980s and early 1990s. While absent from the Colt catalog for several years, the gunmaker reintroduced the pistol in 2008, just in time to catch the new wave of Big-10 mania. Lucky for shooters. Few who shoot the Delta Elite come away disappointed.

Like any Colt 1911, the pistol is well made with excellent fit and finish, and in capable hands is a tack driver. Yes, it can drill the bullseye despite a Series 80 trigger. No, it’s not custom-trigger snappy, but its predictable 4-or-so-pound break is respectable enough.

At 35 ounces unloaded, the 5-inch barreled pistol has enough heft to tamp recoil and plenty of texturing on the grips and backstrap for supreme control. Genuine Novak Sights deliver just what you’d expect, an eye-catching aiming system and just the thing to milk accuracy out of the gun. And a brushed stainless steel finish (there a two-tone model too) give it dashing good looks. The Delta Elite certainly qualifies as a modern classic. 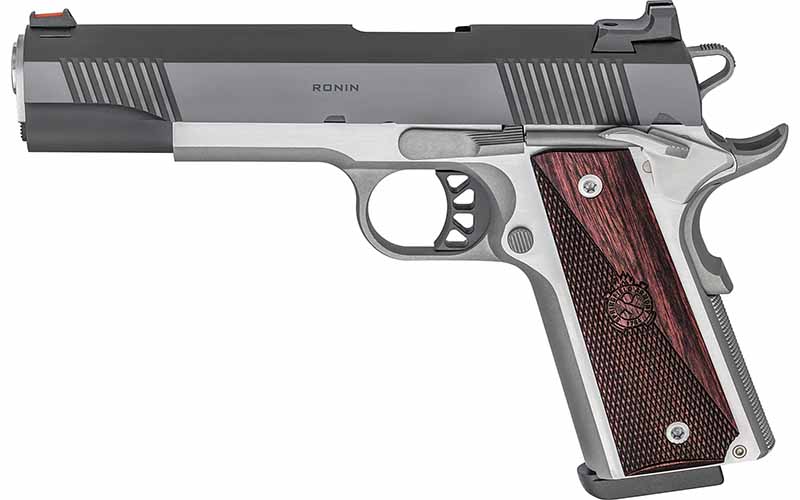 Over the years, Springfield Armory 1911s have earned a rock-solid reputation. Deservedly so, given for the price point few hang with the clean line and nearly flawless performance of the gunmaker’s catalog. You have to step up a bit to get into one of Springfield’s 10mm 1911 pistols. The only model presently made residing in the Ronin series. But it’s not so great a leap as to preclude the shooter of modest means.

Springfield markets the Ronin series as a combination of classic style and modern features, built using a mix of modern and traditional manufacturing methods.The result is this handsome, full-size two-tone 10mm pistol that performs as good as it looks. It uses a forged frame and slide, has a match-grade 5-inch barrel and an 8-round magazine capacity. Each Ronin 1911 also features forward slide serrations and checkered wooden grips.

The gun handles nicely, plenty of weight in the hand—40 ounces—making an extremely controllable 10mm. Top-notch sights enhance the overall system, an eye-catching fiber-optic pipe in front and two white dots in the rear. While a little heavy for everyday carry, the gun could possibly fill this role. Or with the right sights it could transform into a first-class hunter. 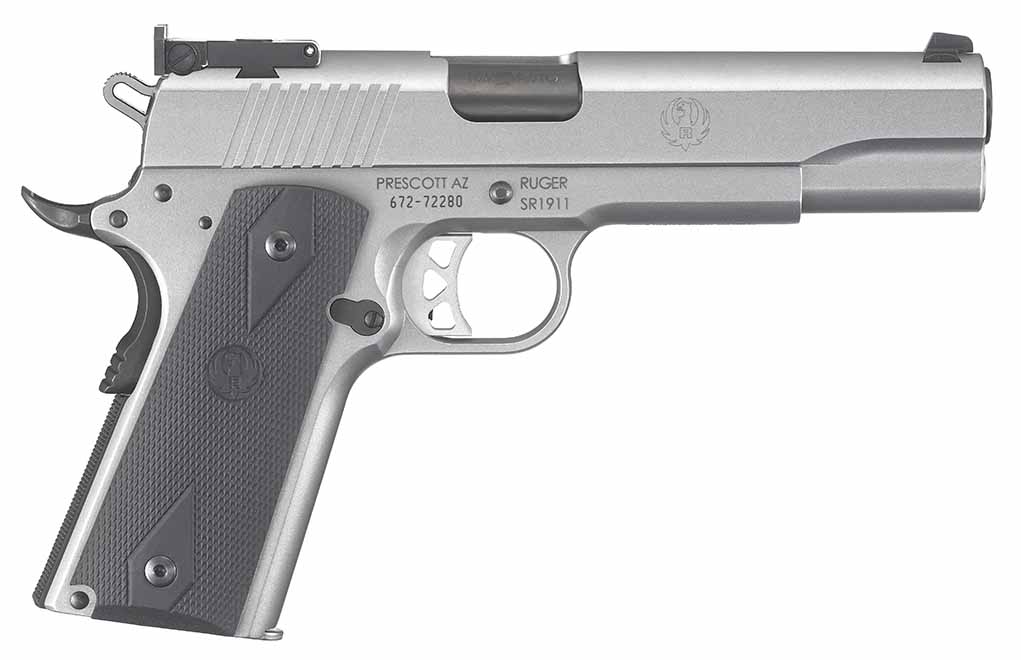 Ruger has an amazing ability to walk a fine line. Generally, this is between cost and performance and is perhaps best exemplified in its 10mm 1911, the SR1911 Target. No, you most likely won’t split gnat hairs at 20 paces with the piece, but for the money, the attractive-looking pistol delivers good-enough accuracy. Invest a little more with a competent gunsmith to clean up the trigger and you’d most likely have a light’s out shooter.

Essentially the pistol is Ruger’s rendition of a Series 70 1911, though the gunmaker made some significant breaks from the original design. This is evident in opting for a 5-inch bull barrel over collet bushings. Debate rages over if bulls provide more support compared to bushings. This won’t get solved here. One thing indisputable about the feature, combined with a full-length guide rod, the SR1911 has more heft up front. A good thing overall, helping tame some of the recoil.

The SR1911 feel good in the hand and prove very controllable. Rubberized panels and ample checkering on the mainspring housing are to thank for this, as well as a high beavertail safety. A Bomar-style adjustable rear sight rounds out the package. It’s a good 1911, one most shooters find capable of filling most roles. Yes, the owl head is the same as those budget revolvers from 100 years ago, but the modern Iver Johnson has nothing to do with its namesake. Unless you’re a sucker for nostalgia, this is a good thing. With a vastly expanded catalog, Iver Johnson is an importer with a slew of superb pistols from the Phillippines (S.A.M. Inc.). Best of all, at prices nearly any shooter can afford.

This includes its outstanding Eagle XL-10 10mm 1911. Certainly, the long-slide pistol isn’t a top choice for on-person defense. A 6-inch barrel and 46-ounce weight is plenty to keep under wraps. Outside of that, the 10mm is fit for any other duty—home defense, competition or hunting.

The Eagle XL-10 has some throwback appeal, dang near a spitting image of John Browning’s Government model design—only longer. The gun’s fit and finish are impeccable—sometimes a concern in budget imports—as is its trigger which generally runs a hair north of 4-pounds. About the only strike against the 10mm, it's right-hand configured and not at all ambidextrous For the price and performance, even lefties can get over this. 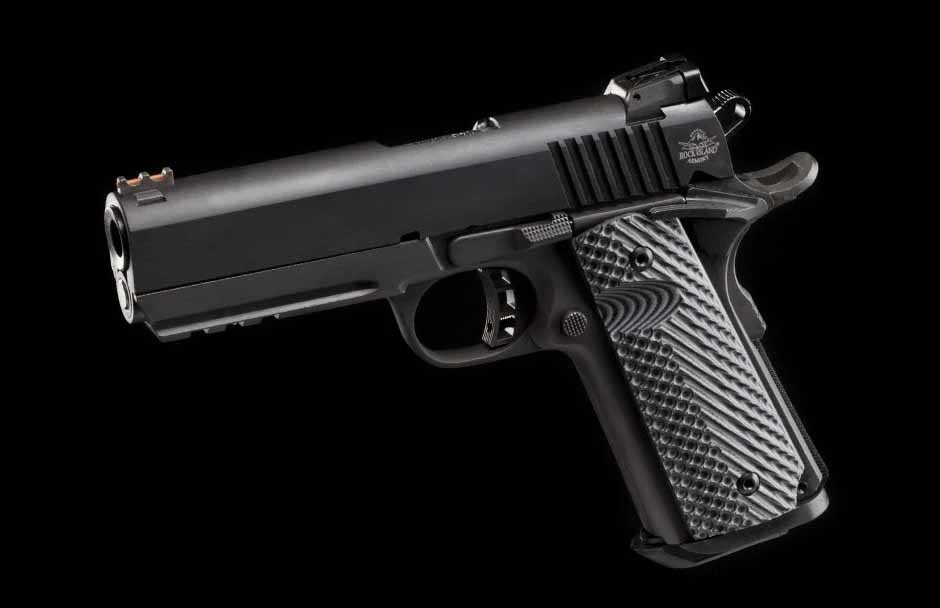 When it comes to budget 1911s that bring something to the table, Rock Island Armory is the king. Based out of the Phillippines, the gunmaker offers one of the largest selections of the iconic pistol out there. And nearly every one of them ticks like a clock. Including the gunmaker’s impressive catalog of 10mm 1911 options.

As far as budget options go, it’s difficult not to opt for the TAC Ultra. One of the truly-carry friendly configurations available in10mm in this tier, the pistol is the perfect choice for overpowering personal protection.

Commander sized, the 4.25-inch barreled TAC Ultra is much more concealable than other options on this list. At the same tick, it boasts enough bore to get the powerful Perfect 10 to live up to ballistic expectations. But don’t expect a long-slide kitten when behind the trigger. At around 37-ounces unloaded it is decidedly lighter than most 10mm 1911s, translating to more felt recoil. Nothing a little practice and teeth gritting can’t overcome.

Rock Island gives shooters the tools to manage the hand-fitted beast, with ample checkering on the mainspring housing and G10 grips that prove very positive. The pistol is also dolled up with carry-enhancing features, including a low-rise, fully adjustable rear sight and corrosion-resistant parkerized finish. 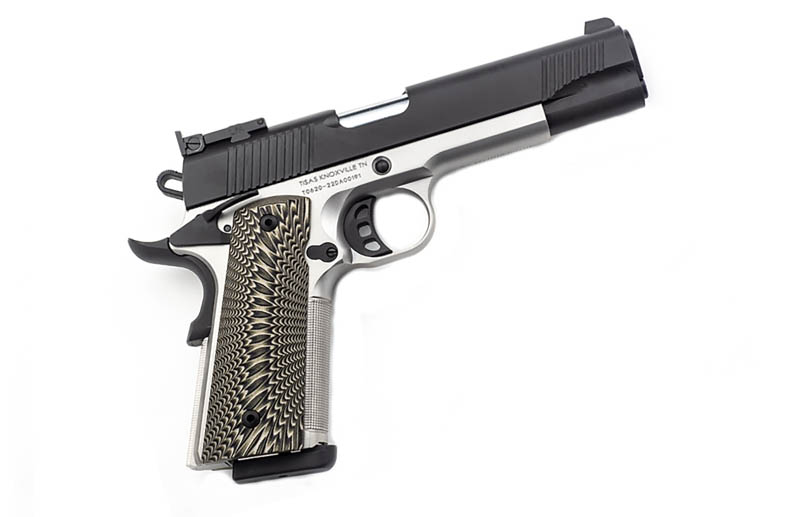 Tisas is a Turkish company, and Turkish firearms have received a mixed reputation in the U.S. The truth is that the Turkish gun industry has grown massively in the past few years, and while some companies' products have been less-than-stellar, plenty of others have proven themselves as great-value guns. The general consensus is that Tisas 1911s fall in the latter group.

In most respects, the Tisas D10 is a fairly standard 10mm 1911. It features a full-size frame, a 5-inch barrel and it comes with two 8-round magazines. The safety is ambidextrous, the grips are made of G10 and extra serrations and checkering have been incorporated throughout the pistol for a more secure grip and improved cocking capabilities. Additionally, the ejection port on the Tisas D10 has been flared and lowered to assist with reliability.

It also features a forged frame, a forged slide and a hammer-forged barrel. This should help keep the pistols running, even after a high round count of full-power 10mm loads, but if a problem does arise the D10 is backed by the Tisas Lifetime Service Plan which covers material defects. The construction methods and warranties have led Tisas to claim that the D10 is now one of the best-value 10mm firearms on the market.