Focusing on these easily improved areas can make for a perfect Colt 1911.

What are the key upgrades and accessories:

Few names are as intertwined with the 1911 as Colt. Manufacturing the single-action semi-automatic pistol since John M. Browning came up with the design, the company has continued to innovate and evolve the handgun for more than 100 years. And they’ve struck a fairly elegant balance, remaining true to Browning’s original vision, while improving the pistol in small yet notable ways — caliber, size, etc. A century under its belt, it’s fair to say Colt turns out a dandy 1911 – ready for action, whatever action is thrown at it – straight from the box. If you thought little improvement was necessary or needed on the user’s part, you’re pretty much correct.

That said, as a mass-produced firearm, not even Colt’s long-running familiarity with the pistol hits all the right notes with every shooter. Luckily, there are minuscule upgrades and accessories that go an exceedingly long way in making the pistol perfect for even the most finicky shooter.

There’s good news and there's bad news about a holster for a Colt 1911.
On the bright side, you can carry the legendary pistol nearly any way you see fit and that will enhance your particular application. Covering nearly every style of carry and type of holster, the market offers an incredible selection tailored to the handgun. Material, body position, concealment – there really isn’t a gap in Colt 1911 holster selection.

The difficult aspect, it’s still shopping for a holster. Anyone who’s gone through the process knows it’s arduous and frustrating, typically resulting in a closet shelf full of rejects. It’s the nature of the game. Even if you were looking to carry any pistol other than the 1911 you’d face the same ordeal. Patients and a willingness to hunt for what works for you are really the only keys to success.

As mentioned, holster options abound, but that doesn’t mean that every model made for a 1911 – Colt or otherwise – makes sense. In turn, a few thoughts on the pistol itself might go a ways in winnowing what will most likely get the job done and what will end up on the also-ran pile.

Compared to a majority of other modern handguns, the 1911 generally has two defining aspects – heft and size. Of course, the weighty metal frame and long sight radius of a full-sized model is what attracts shooters to the pistol in the first place. Yet, these aspects also present certain challenges carrying the pistol comfortably.

With those facets in mind, inside- and outside-the-waistband holsters tend to win the most favor with shooters. With a solid gun belt, the possibility exists to carry a 2-plus pound full-sized 1911 without throwing your hip out of place. Though, concealability tends to present an issue when talking about choosing between the two styles, especially with a large-frame model.

Outside of a Colt Defender (3-inch barrel) or Commander (4.25-inch barrel), OWB can pose concealment problems with a 1911. Can it be done? Absolutely. However, unless you plan to wear a long coat all the time, it typically means carrying in the small of the back or a cross-draw setup.

Good examples of holster that work well in these OWB positions are Galeco’s Combat Master and Craft Holsters’ Leather Pancake. Both systems cant the pistol, cutting it profile and keeping it well within reach. Additionally, each is well made and won’t go limp over the long haul.

Concealing the barrel no longer is a concern, IWB holsters tend to free you up your options. And given the inherent slimness of the 1911’s design, its less of a hassle than it initially appears. Cant, again, is again a priority with this style of carry. Thankfully, a majority of holster makers design their wares with this key adjustment.

The CrossBreed SuperTuck goes a long way in hitting all these points and does a fairly good job of protecting your prized Colt from body moisture. Though, in certain circumstances, something as simple as the Bianchi 100 Professional is the perfect deep-carry option.

Somewhat of a sermon preached on the belt line carry, don’t let it hold you back from trying other systems. Possibly a belly band will deliver for your particular circumstances or even the resurgent shoulder holster could be the best bet. The latter is a definitely great way to carry a 1911 on the hunt.

No matter what direction you go, always remember there are bound to be limitations with any system no matter the promises on the box.

In general, Colt 1911 sights are much better now than in the past, but that claim could apply to nearly any manufacturer of the pistol. With an eye toward a more accurate and user-friendly handgun, a better part of Colt’s current stock comes outfitted with some version of Novack sights.

Furthermore, Colt has tailored specific sight styles to models, enhancing their anticipated application – Low-Mount Carry rear sight on the Denfender, Adjustable Bomar Style on Gold-Cup Trophy competition model, and so on. They’ve come a long way since the Series 70 guns.

Inevitably, the Novack sights won’t work for every shooter, thus an upgrade is required. Though not exclusively confined to carry guns, these models tend to get the once-over in the sights department, particularly with shooters who insist on night sights. Whatever the case, on modern Colts, the process is fairly painless and there are plenty of models available.

Most modern Colt 1911 sights dovetail into the slide, therefore tools requirements are minimal. Generally, brass punches, a brass or nylon hammer and a vice will get the job done. Though, if you’re tool fanatic and foresee handgun sight replacement as part of your rigmarole, then you might want to invest in a sight pusher. You can spend top-dollar on something like an MGW Range Master, but a less-than-a-hundred bucks options will get the job done, even if they look a little rough around the edges. However, be forewarned, the new sights' dovetails are intentionally made larger than the slide slots and require filing to fit properly. Don't be ashamed if you turn to a gunsmith to do the job poperly. 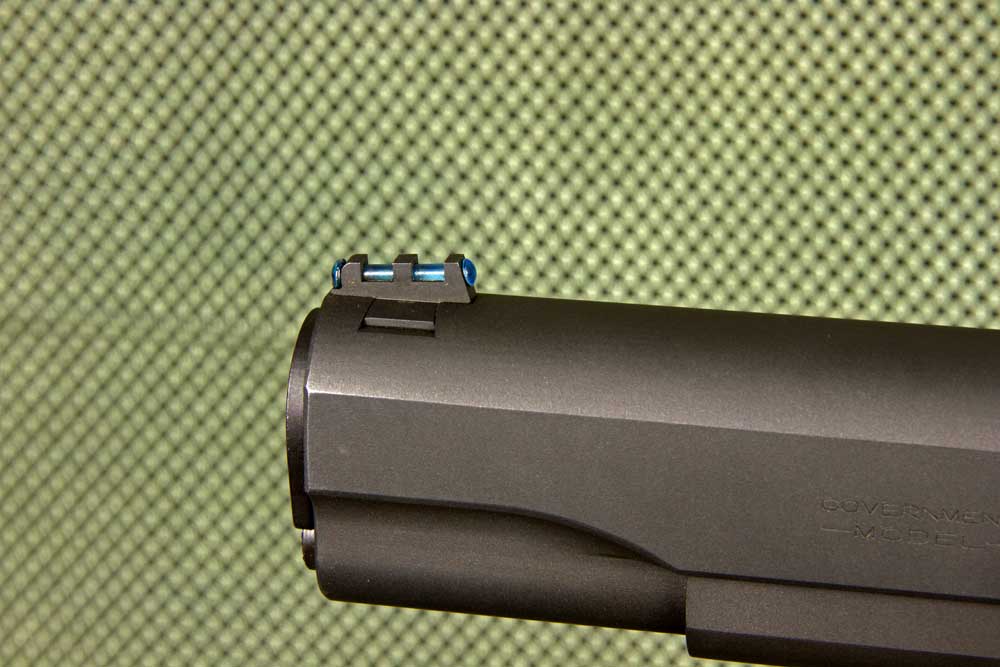 Either way, sight options are nearly boundless. At the time of writing, Brownell’s listed 117 rear sight options – a selection wide enough to accommodate even the most persnickety shooter. Generally, trusted names in sight manufacturing win the highest marks with shooters – Trijicon, XS, Meprolight. Trijicon HD has long been a fan favorite for night sights and XS Big Dots for a true high-visibility option. But honestly, the sky is the limit.

In choosing a new set of Colt 1911 grips, there is an urge to express yourself. However, dolling up a pistol should never come at the cost of performance. Grips that do not properly support the plunger tube, break under stress or do not provide a positive grip should be like bargain whiskey – avoided.

Generally, wood, G10 and aluminum all make superior grips. Each of the materials is durable, holds a texturing well and are attractive (for the most part).

Rubber isn’t out of bound. Hogue OverModled Rubber Grips offer an ergonomic option with finger grooves and are quite durable. Though, VZ Operator II or one of Chip McCormick’s wood options give a gun a more traditional look.

If you need to express yourself, better than simply picking someone else’s design, companies such as AlumaGrips give you the ability to place your own twist on your grips. Through an online process, you can upload your preferred designs and have the aluminum grips cut to your specific specifications for a truly custom look. To boot, they’re surprisingly affordable.