Looking to stock up your gun safe or need a new piece of gear to get you shooting straight, we've got 14 sweet shooters and accessories that are on target. Ruger’s plucky PC Carbine has a new look: precision shooter. While precision match shooters might not run to it, the 9mm still has plenty going for it in its chassis configuration. It’s the first in the line to feature a pistol grip and adjustable, folding buttstocks (six-position, telescoping Matgpul MOE). It also features several other accuracy enhancements, such as a lightweight, glass-filled polymer chassis and CNC-milled/M-Lok-compatible aluminum handguard, which free-floats the barrel. Ruger didn’t sacrifice the other facets that made the PC line a hit, including the popular lever-operated takedown system and Dead Blow tungsten-weighted action. MSRP: $799, ruger.com

Opening a new dimension to honing your long-range shooting, TargetVision’s spotting scope-based camera might change the way you look at the bullseye. Fitting to any 36mm or 58mm eyepiece, the lightweight Hawk gives you an eagle’s-eye view of your shooting—without ever leaving the firing line. It delivers 1920×1080 resolution, allowing you to make out every hit or miss and adjust accordingly—all from your smart device. And, with seven hours of run time and the ability to save photos, the TargetVision app offers you all kinds of ways to save your best shots. There’s not a more productive way of seriously tracking your downrange performance. MSRP: $329, longshotcameras.com At first blush, it’s difficult to discern if the P365 SAS (Sig Anti Snag) even has an aiming system … until you get on its business end. There, what Sig calls its Flush-Mounted FT Bullseye Fiber-Tritium Night Sight pops like a bottle rocket at midnight. Unorthodox? Yes. But the re-engineered gutter sight, combined with a well-rounded slide and frame, all but guarantees the pistol won’t get hung up on the draw. Sig also took the unconventional route of porting the barrel and slide, reducing the 9mm’s recoil and making it potentially faster and more accurate from shot to shot. Sig also flattened the pistol’s controls, creating an overall trimmer gun that’s easier to conceal. MSRP: $599, sigsauer.com If your .30-caliber’s weight or balance is a concern, Griffin Armament has a deal for you. Moderately sized, its 30SD-K Gate-Lok Suppressor is closer in heft and length to most full-sized 5.56 rigs. Yet, it’s got the chops to handle your big dogs. Full-auto-rated, the suppressor has impressive signature reduction—thanks to Griffin’s HEDP baffle technology, which optimizes flow and achieves properly balanced blowback and muzzle performance. The 30SD-K also has convenience engineered into it, accommodating USGI-spec A2 compensators, as well as the company’s proprietary muzzle devices. MSRP: $945, griffinarmament.com More organized, more secure, more convenient—there’s more of everything when it comes to Trayvax’s Original 2.0 Wallet. For example, it stops high-tech thieves from stealing your data via RFID scanners. But you’ll love it for lightening your EDC load. Made from high-tensile aluminum and Melonite-coated steel and held together by mil-spec parachute cord, this minimalist wallet is a rock. And, it’s multifunctional, with a pry bar, money clip, bottle opener and attachment point all part of the design. It’s time to throw away that ragged, old piece of cowhide and tote your cash and cards more securely and sensibly. MSRP: $29.99, trayvax.com Unless you’ve been living under a rock, you know first focal plane scopes are where it’s at in precision optics. And few companies have done more to defray the generally substantial sum theses scopes demand than has Primary Arms. Its Gold Series precision riflescopes continue this, offering shooters 2.5-10x44mm, 4-16x50mm and 6-24x50mm FFP options at very reasonable prices. Top-notch glass with high-quality coating delivers crystalline image clarity at all ranges, and an enlarged eye box enhances dynamic target acquisition. Night-vision compatible, the illuminated reticle features both day and nighttime settings that provide a sharp aiming point. And, with aircraft-grade aluminum tubes and stainless and hardened-steel components, these scopes are built for heavy-duty use in harsh conditions. MSRP: Starting at $749, primaryarms.com Offering speed and accuracy, what’s not to love about Blaser’s straight-pull R8 Ultimate? The gun is a knockout, but a lot of adoration has to center on one of the most advanced adjustable stocks to hit the market: The German gunmaker has outdone itself with its thumbhole masterpiece. It’s a breeze to dial in, and a memory function all but eliminates fiddling with it once fitted. Length of pull, cheek rise and butt cant all pop precisely into place at the push of a button. If that’s not enough, the lightning-fast turn bolt is also a switch-barrel, making it any rifle you desire, from varmint to dangerous game. MSRP: $4,519, blaser.de/en Unless you’re talking about busting, “HK” and “budget” aren’t usually found in the same sentence. But the German gunmaker pulled it off with the Umarex-made .22 LR version of its military thoroughbred rifle, the HK416. With the look, feel and handling characteristics of the centerfire rifle, this rimfire monster is a top-end trainer that doesn’t demand top-end cash. Adding to its authenticity, the .22 HK416 has a standard, A2-style birdcage flash hider and ½x28 threads for use with other popular .22 accessories (including suppressors and aluminum receivers), a retractable stock, flip-up sights, functional dust cover and M-Lok slots for accessories. It also has last-round holdopen. Any closer to the HK416, and you’d be squeezing the trigger on the real thing. MSRP: $449, heckler-koch.com The B-14R .22 LR is based on Bergara’s popular line of centerfire rifles and includes the accuracy-enhancing bells and whistles: bull barrel, fully adjustable stock, oversized tactical bolt handle and threaded muzzle. This rifle’s stock deserves a bit more comment: In addition to its customizable length of pull and cheek rise, the HMR (Hunter-Match Rifle) system also features an integral mini-chassis, which provides superior rigidity, especially for a rimfire. Uniquely, the B-14R also feeds off AICS mags … kind of. The magazine is built to AICS specs and is a dead ringer. However, it’s actually a modified 10-round, single-stack system. Still, for an economical trainer, the full-sized feel of the mags is certain to add authenticity to the experience. MSRP: $1,150, bergara.online/us 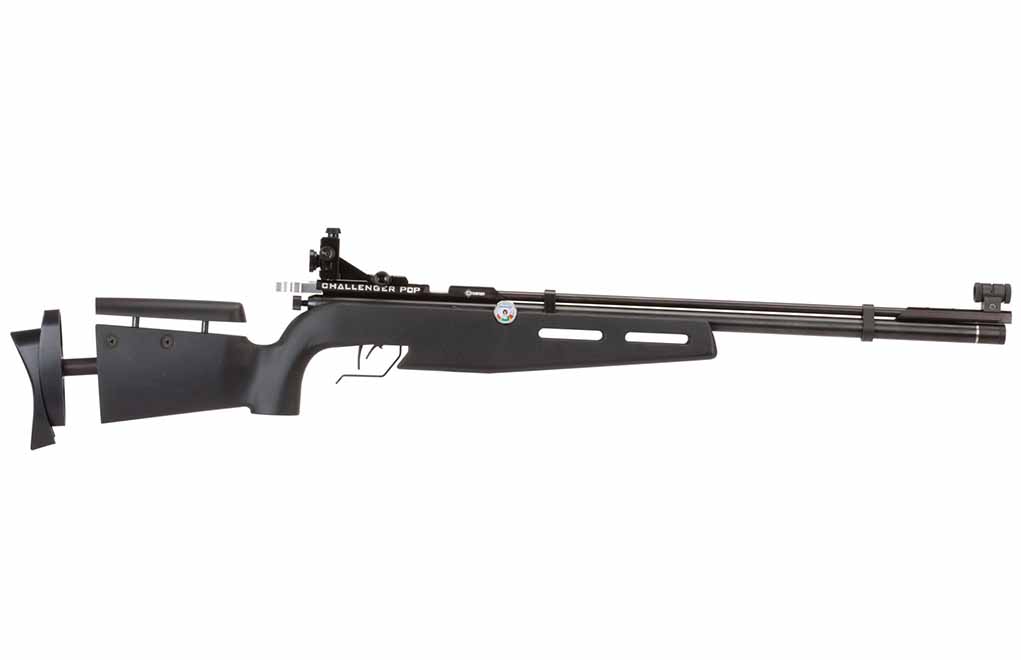 Airgun competitions are as deadly serious as any held at Camp Perry, and Crosman has the iron set to excel off the firing line. With the National Three-Position Air Rifle Council’s seal of approval, the Challenger PCP has everything you need to dominate the Sporter Class. Prime among these are an entirely upgraded fire control and barrel. The Challenger features a two-stage, match-grade, adjustable trigger you can tune to trip at a feather’s touch. Then, it keeps everything on target with a Lothar Walther barrel—renowned for its hair-splitting accuracy. The PCP functions with either CO2 or compressed air. Fans of the previous Challenger, the 2000, needn’t fear: Crosman hasn’t strayed very far, keeping the adjustable stock and ambidextrous bolt handle. MSRP: $630, crosman.com Yes, this pistol is designed for professional training, but it’s also more fun than should be legal. Sig’s Air ProForce M17 Airsoft is the living image of the Army-issued P320-M17 9mm in look, balance and handling. Heck, the slide even actuates, and you load with mags that are facsimiles of the ones the M17 uses. The exception is that when you pull the trigger, you’re spitting out harmless polymer BBs fueled by CO2. Talk about the ultimate backyard trainer! Plink away, work your speed reloads, and have a load of fun. At the same time, the ProForce M17 will keep you razor-sharp with your full-powered Sig. MSRP: $160, sigsauer.com Don’t think that just because you’re pitching BBs, you can skirt basic safety practices. Air rifle, rimfire or centerfire, you need to protect you’re looking orbs. Wiley X has you more than covered. A stylish option for the range, the WX Aspect glasses don’t skimp on protection; they meet and exceed ANSI Z87.1 industrial standards for high-mass and highvelocity impact protection. Plus, they offer unparalleled clarity by amplifying color and delivering crisp images—everything you need to keep on target. Did we mention that they’re also as light as all get-out? MSRP: $130, wileyx.com It’s nice to have options. With its completely modular and tubeless design, the Q Erector gives you plenty of them. The .22 suppressor is completely configurable for any application you cook up for it through its simple, screw-together design. Need a little something to take the edge off your pistol? Slap on a couple of baffles. Is your need for stealth at a premium while you’re out hunting? Then go whole hog and screw together the entire stack. The sky—along with the 10 baffles—is the limit with this 2.6-ounce suppressor. A bonus: The stainless steel-and-aluminum hush tube might be among the simplest-to-maintain noise-reduction devices you’ll find. MSRP: $449, liveqordie.com You had us at “Bulk Packs.” What better way to keep range day going than a mountain of .22 LR ammo at your disposal? Now, Blazer offers this option with 525-count boxes of its topnotch plinking ammo. Actually, you don’t have to limit yourself to punching paper with this stuff: It cooks and is dandy for anything you might aim at with your .22. Blazer tops off the rounds with a 38-grain, roundnosed lead bullet and has it sizzling from the muzzle at 1,235 fps—more than enough to dust a pesky gopher or drill bull’seyes all afternoon. MSRP: $29.95 (box of 525), blazer-ammo.com

The article originally appeared in the December 2019 and January 2020 issues of Gun Digest the Magazine.