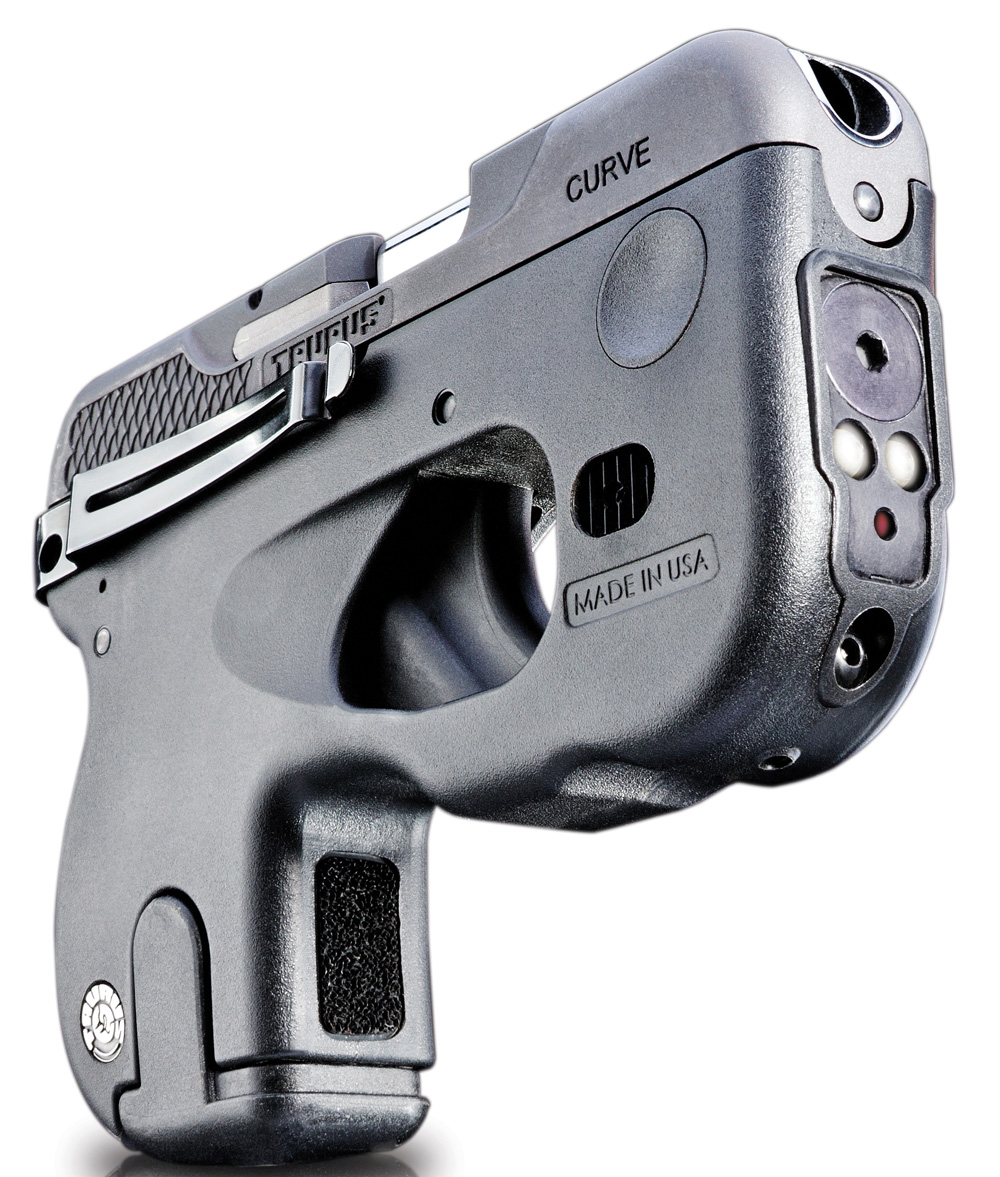 Taurus has done it again. This innovative Brazilian company revolutionized personal defense handguns when it introduced the big-bore Judge in 2010. This year they’ve provided us with a whole new “curve” on deep concealment .380s. Carrying a concealed handgun discreetly can sometimes be a problem. Even compact handguns can be hard to conceal when wearing light clothing in warm climates. This is especially true for people who are of small stature.

The size, weight and the overall squareness of most compact revolvers and semi-autos often makes them bulge at the waistband or print through a shirt, even when the best IWB holster is used. Some folks even have trouble concealing sub-compacts, so they resort to vests, fanny packs or special carry bags that too often are dead giveaways.

Taurus’ solution was simple in concept. Build a gun that doesn’t require a holster and give it a body-hugging lightweight polymer frame that is concave on the left side.

This allows the pistol to curve around a right-handed shooter’s hips when carried in the waistband on the right side or in a cross-draw position on the left. Curving the frame greatly reduces printing when you stand still, and when you move, the gun moves with you and doesn’t protrude.

Even if you don’t carry on your hip, the curved frame still offers advantages. Its unique shape makes the gun fit naturally in the right front pocket of most trousers. If noticeable at all, it looks like a wallet. It also carries nicely in some ankle rigs, and, for ladies who wear dresses, on the inside of the left leg in a thigh holster.  The curved frame does limit the use of this gun for lefties.

In addition to its unique frame, the Curve has other features that improve its concealability and tactical utility. The edges of both the frame and slide are fully rounded, and there are no sharp or protruding edges on the pistol to cause the gun to print or dig into the flesh.

Rounding includes eliminating the slide-stop lever and replacing the magazine release button with a pressure release at the base of the pistol’s six-round magazine.

This helps avoid abrasion of skin and clothing. In fact, the only part that can catch on clothing is the frame-mounted belt clip, which after all, is intended to grip the waistband. For those who wish to carry only in a pocket or a leg-mounted holster, the clip can be removed by removing two screws.

Tactical innovations include the absence of sights on the slide that might catch on clothing. When carrying in a holster, the holster’s sight track helps prevent the sights from snagging when the gun is drawn. Instead of a gutter, the Curve has a built-in laser/light combination, which is very good for both sighting and target identification in low light. For shooting in bright daylight the pistol has white markings on the rear of the slide that intersect on the axis of the bore. They allow the shooter to index the bore on the target.

Finally, there are a number of safety features that should be mentioned. The Curve has a pop-up loaded chamber indicator and magazine safety that will not allow the pistol to be fired with the magazine removed.  It also has a long double-action only trigger pull that helps prevent accidental discharges. The gun also comes with a polymer trigger cover, which may be used for carry. I tested the Curve indoors in low light at the ultra-modern Nexus Shooting Range near Miami and outdoors at the Flagler Gun Club in central Florida. All shooting was done at relatively close range, as this pistol is designed for close-in defensive shooting. In low light the built-in laser and light performed as designed and allowed for good shot placement. Outdoors using the bore indexing lines delivered reliable hits to the head, neck and center chest at 4 yards.

The Curve was test-fired with a variety of ball and hollow point ammunition. Functioning was excellent, as long as the gun was kept clean and lightly lubed. Given the critical alignment of its magazine and barrel, the Curve has close tolerances. Therefore heavy build-up of firing residue did cause a few failures to go fully into battery. Regular maintenance is advisable.

The Taurus Curve is one of the most innovative personal defense handguns to come along in the last several years. It is as sleek as a smartphone and the holsterless design will intrigue many prospective buyers. The built in laser and light is a great bonus. People looking for a concealable .380 semi-auto just might want to give the Curve a close look. This handgun review also appeared in the January 22, 2015 issue of Gun Digest the Magazine.