No need to break the bank. These four concealed carry upgrades will have you carrying like a pro on the cheap.

What Are The Quick And Dirty Concealed Carry Upgrades:

Honestly, you needn’t get a trigger job on your pistol or break out your wood-burning kit to stipple its grips to upgrade your carry rig. There are plenty of down-to-earth, sober options that will make you a more efficient armed citizen and the whole process a load easier. To boot, most of them fall within any shooter’s price range and will end up being money well spent. With that in mind, here are 4 Must-Have Concealed Carry Upgrades that are certain to enhance going armed. A proper grip is a cornerstone to accurately delivering defensive fire from a handgun. In addition to mitigating recoil, thus making the handgun more comfortable and controllable, the correct grip also ensures you’ll hit what you’re aiming at. Grips are a design aspect gunmakers have turned their eyes to in recent years, offering much more aggressive texturing to facilitate a more positive purchase. If you aren’t lucky enough to have a brand-spanking-new carry pistol, there are still ways to get a handle on your handgun. There are tons of aftermarket grip options, among the simplest concealed carry upgrades, from manufacturers such as Hogue, Blackhawk and Pachmayr.

Talon Grips (pictured above) offers one of the simplest with its wrap-around peel and stick grips, tailored to a vast spectrum of popular handgun makes and models. Available in aggressive granulated and rubberized variations, the modification only takes minutes to apply and greatly enhances the control of a firearm.

G-10 is another material that has been a popular choice for aftermarket pistol grips in recent years. Made out of a type of compressed fiberglass laminate, G-10 can be made incredibly thin while remaining very strong. While beefy rubber grip sleeves like the ones made by Hogue tend to be preferred by those with larger hands, G-10 grips are a great choice for anyone who wants to add texture to their handgun without increasing its bulk. If you carry concealed, you should carry spare ammunition. This isn’t as simple as it sounds, because you aren’t just throwing a few extra rounds in your pocket and calling it good. You need to have it easily accessible and ready to manipulate when you have a tanker load of adrenaline pumping through your veins. This is an easier problem to solve for those who carry semi-automatics with much more clandestine magazine carry options. For those who want to carry at the beltline, Alien Gear has a slick system in its Cloak Mag Carriers (pictured above). The units can be carried inside and outside the waistband. The unit can even be set at a cant to run perpendicular to the belt itself.

Among the most intriguing concealed carry upgrade in this arena are pocket magazine holsters, such as the SnagMag and ExtraCarry that keep spare ammo at hand, while breaking up the profile of the magazine. Extra rounds for revolver shooters can be a bit trickier. Wheelgunners are still stuck with speedloaders, pouches and Bianchi Speedstrips. None of them are ideal, due to size or reload speed, but they’ll do the job. 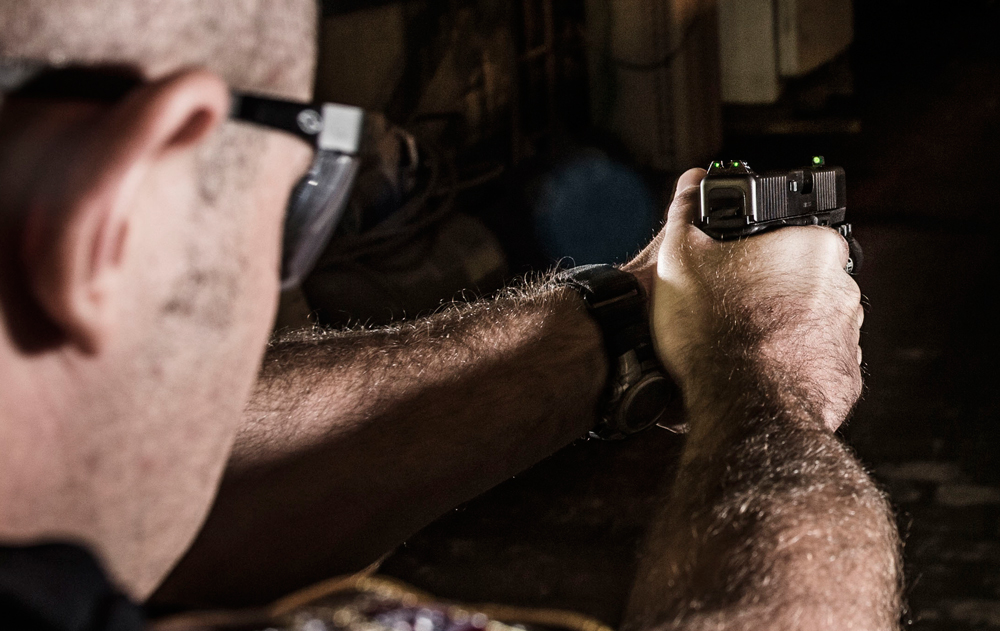 A deadly assault can happen any time, even in broad daylight. But that doesn’t mean that you won’t have to defend yourself in the dusk or dark. Night sights are among the most prudent concealed carry upgrades. Presently, tritium night sights are the go-to choice for those looking to make certain they have a clear sight picture in low light. They offer a great advantage over other night sights, given the radioluminescent hydrogen isotope is continuously aglow, thus always ready for action. TrueGlo, Trijicon (pictured above) and Meprolight all offer excellent options for nearly any conceivable make and model of handgun. But perhaps you’d like to take it up a notch and consider a laser sight. These handy aiming solutions shouldn’t be considered replacements for traditional sights, since electrical devices can malfunction or run out of battery power. But something such as the Crimson Trace Rail Master does provide an outstanding way to get on target in dusky conditions. Are you still using that strap you got at a department store’s summer sale to tote your gun? No wonder your rig is so danged uncomfortable. Your average everyday belt just doesn’t cut it when it comes to concealed carry, though there are plenty of folks who try to jam that square peg into a round hole. A gun belt, among the most overlooked concealed carry upgrades, ties your whole carry system together, makes sure your handgun is where it needs to be on the draw and makes carry just a whole heck of a lot easier. Nice thing is, there are plenty of concealed carry belts out there that won’t draw attention and provide the rigidity required to support a handgun. Galco, one of the oldest holster makers around, knows gun leather and has a good selection of leather belts, as does Crossbreed (pictured above). If you're looking for something nylon, Blackhawk and Ares both are excellent places to start.

There’s a new type of CCW belt that’s been gaining popularity lately too, commonly known as micro-adjustment belts. They’re made by a few different companies including Nexbelt and Kore Essentials, but the general concept remains the same between all of them—these belts feature no traditional holes or buckles, and instead use an internal ratcheting system that allows for much more precise adjustments to be made. This is a great feature for anyone who frequently switches up the gun, holster or position they carry in, or just for keeping your gun secure regardless of how your waist size may fluctuate.