How the SCAR 20S is configured for precision shooting:

Long-range marksmen and precision shooters rejoice! You now have another option in your quest to accurately deliver a round to the next county. Once only available to the military, FN America announced this week the introduction of the SCAR 20S, the civilian version of the MK20 SSR utilized by US SOCOM units for the past decade. 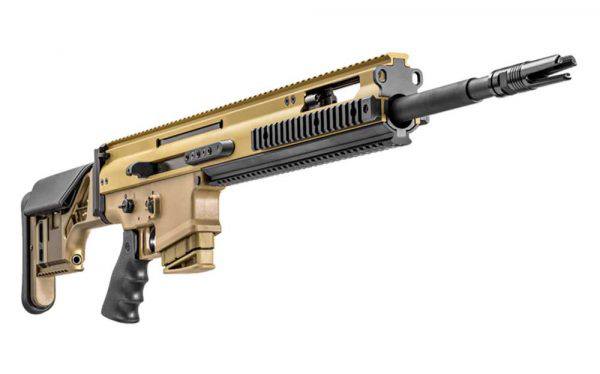 FN appears to deliver a true-to-form package in the precision rifle, boasting similar specs to the MK20 SSR. Like the Sniper Support Rifle, the 7.62x51mm SCAR 20S boasts a 20-inch heavy profile barrel with a 1:12 twist, an adjustable stock and MIL-STD-1913 rails at the 3-, 6-, 9-, and 12 o’clock positions. Additionally, the new rifle also comes outfitted with a double-stage Geissele Super SCAR trigger, which breaks at 3.5 to 4.5 pounds.

This release follows up from a month ago when FN announced a run of 200 limited editions SCAR 20S kits. Decked out, the sets came with a load of extras, including Harris SBRM Bipod, FN Branded SKB iSeries hard case with custom foam insert, FirstSpear R37 Rifle Wrap and Soft Case/Shooting Mat, among other things. The kit ran a bank-account exhausting $5,499. Shooters’ pocketbook won’t get much of a reprieve with the store-shelf version SCAR 20S, which rings up at a stout $4,499. That’s the cost of going long.

(McLean, VA) FN America, LLC is pleased to announce the release of the highly-anticipated FN SCAR® 20S precision rifle, based on the FN MK20 SSR or Sniper Support Rifle currently fielded within USSOCOM. The 7.62x51mm-chambered rifle has been purpose-built to achieve superior long-range accuracy.

“The FN SCAR 20S is the latest addition to our battle-proven line-up of FN SCAR products and the first commercial SCAR release since we launched the 17S in 2010,” said Mark Cherpes, President and CEO for FN America, LLC. “Customers will notice that the FN SCAR 20S shares more commonalities than differences with the MK20 SSR and reaffirms our commitment to producing commercial versions of our iconic military firearms.”

The rifle achieves 1-MOA (minute of angle) accuracy to 100 yards with match-grade ammunition out of the box. The 20-inch, 1:12 twist, heavy profile barrel and barrel extension, and extended, monolithic receiver add the additional rigidity that reduces fluctuation or movement between shots while the extended receiver provides the much-needed rail space for high-powered optics. The custom-designed MK20 SSR buttstock adjusts to length of pull and comb height to customize the fit to each shooter while in the prone firing position, and the factory-installed, double-stage Geissele Super SCAR trigger achieves a 3.5-4.5-pound trigger pull.