Engineered not to run afoul of Draconian gun laws, the DS-10 Typhoon in 6.5 Creedmoor gives shooters an AR-style rifle that can reach out.

It’s been a tough go for AR fans in such far-flung locales as New York, New Jersey, Maryland, Washington D.C. and California. Over the past couple of decades, the state and city governments have passed a bevy of gun laws in a thinly veiled attempt to red-tape America’s most popular rifle out of existence. While the politicians sure have made it a royal pain in the neck to bring the wiz-bang semi-auto into compliance, they have not ceased the sale of the firearms.

Enterprising firearms manufactures were quick to answer the call to produce AR-style rifles legal for sale, purchase and ownership in the less enlightened corners of the country. Dark Storm Industries was at the vanguard of this niche, churning out compliant versions of Eugene Stoner’s brainchild. And it has continued to advance their platform to meet shooters’ needs across all 50 states. Most recently, the New York-based manufacturer gave long-range shooters a reason to look in their direction, releasing its DS-10 Typhoon in 6.5 Creedmoor. The rifle comes in the company’s three configurations tailored to different gun laws around the country — Standard, Featureless and Fixed Magazine.

The Standard model DS-10 Typhoon, as its name suggests, is a standard AR configuration, familiar to shooters in the civilized world. And the Fixed Magazine is, essentially, the same as the standard, only with a non-removable 10-round box magazine. The Featureless, on the other hand, is a complete break from what most imagine when they think of an AR.

Outfitted with the Thordsen FRS-15 rifle stock, a fixed model that does not attach to the buffer assembly, and sans a number of common features, the rifle is compliant coast to coast. Other notable departures from a common AR configuration include a grip integral with the stock, Thordsen buffer tube cover (QD sling sockets on each side) and no muzzle device. As a side note, despite being fixed, the stock is still adjustable for length of pull through a spacer system. 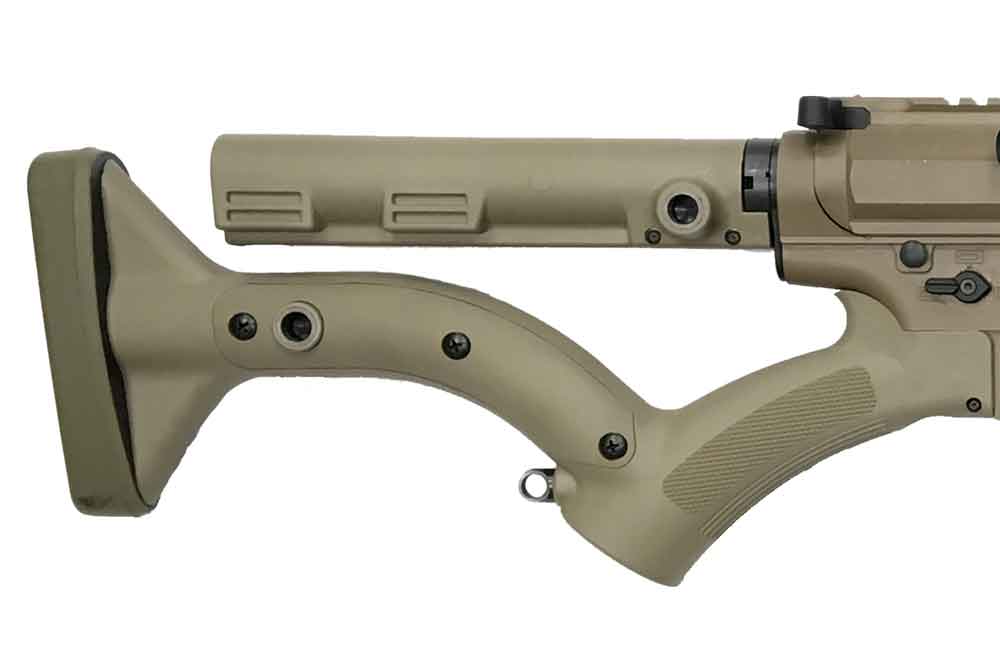 In all cases, the 6.5 Creedmoor models have 18-inch barrels with a 1:10 twists. Each is outfitted with a 15-inch narrow profile handguard, with M-LOK slots at the 3, 6 and 9 o’clock positions and a full-length Picattiny rail on top. They have mid-length gas systems, with steel micro gas blocks. And all boast Spec Ops Gen 2 Charging handles.

In this day and age, it’s a bit steep for an AR-style rifle; however, if you reside in coarser regions of America, the price could be just right to keep on shooting.