Think the AR platform is only good for target shooting, defense and predator and varmint hunting? Think again. Check out these five great big-bore ARs and cartridges geared toward bigger tasks and larger game.

This likely won’t shock you, but the sales of AR rifles and accessories have skyrocketed in the past five years. In the early 2000s, there were only a handful of companies that built and sold ARs, but this year there were more than a hundred companies displaying new AR rifles, parts and accessories at the annual SHOT Show in Las Vegas.

This comes despite the anti-gun media’s seek-and-destroy mission aimed at vilifying all things AR. These guns have survived the onslaught of attacks because the AR platform itself is so versatile, so functional and so much fun to shoot.

Besides being a great gun for casual shooting, competitive shooting and defensive applications, the AR makes a fantastic hunting rifle. ARs are the fastest-growing subset of hunting rifles, and many companies are now building ARs designed specifically for the game field. These rifles are accurate, customizable and allow for very fast-follow-up shots, but until recently, their use has been largely limited to predators and varmints.

That, too, is changing. More and more deer hunters are carrying AR rifles, and the platform has become one of the top choices for hog hunters.

But what about larger stuff? What about pursuing creatures that can turn the tables and can – in an instant – turn the hunter into the hunted? Is there a place in the realm of dangerous game hunting for big-bore ARs?

One of the most common charges levied against AR rifles by the sensational anti-gun media is that these rifles shoot flatter and hit harder than traditional hunting designs like bolt actions, the mythic higher-powered, high-power rifle.

The anti-gun media never lets ballistics get in the way of a good story, but hunters and shooters obsess over energy and trajectory charts. You don’t have to spend much time researching to realize that the standard 5.56/.223 isn’t considered much of a deer round (although there are some hunters who swear by its effectiveness and have seen a lot of deer harvested with that cartridge), and it isn’t even legal in many states.

But the AR-10 platform chambered in .308/7.62×51 offers considerably more knockdown power, and other cartridges like the 6.8 SPC and .260 Remington are versatile hunting rounds that can be chambered in AR rifles.

But again, what about even larger game such as bears, bison and other large, heavy, potentially dangerous animals? Is there an AR suitable for that class of game?

In truth, there are many. There are several options for hunters looking to pursue the largest game with their AR and plenty of effective cartridges.

The good news is that many of these cartridges are sufficient on a wide variety of game, so whether you’re tackling big hogs or brown bears, one rifle will do it all. Versatility is, after all, one of the hallmarks of the AR platform.

Here’s a selection of five of the best big-bore ARs and cartridges for hunting the largest, toughest and potentially dangerous animals. 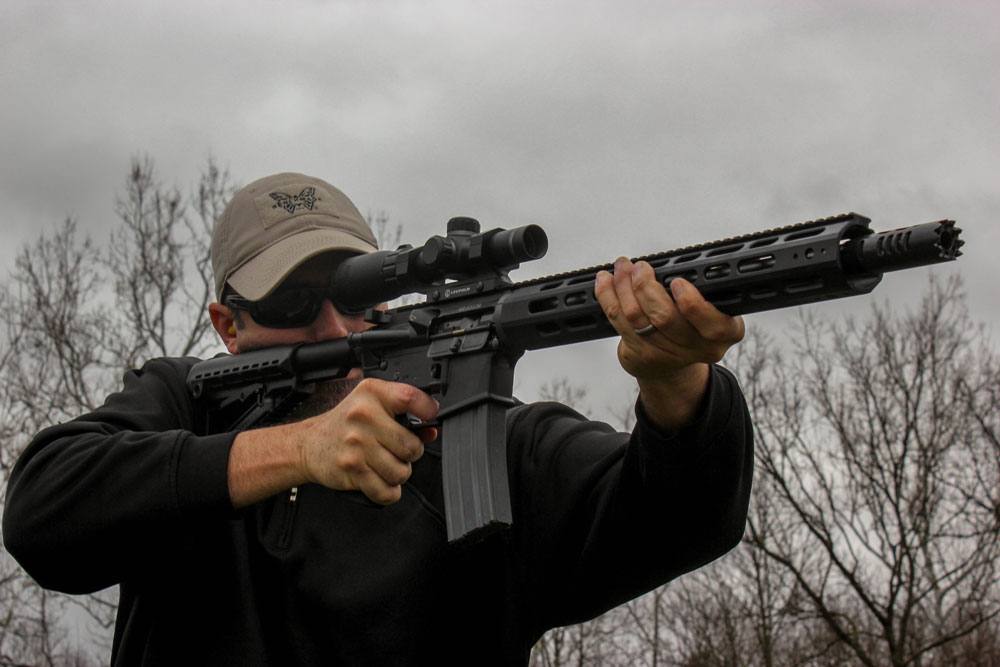 Rock River Arms LAR-458 Beast in .458 SOCOM
The Beast is chambered in .458 SOCOM, a cartridge that was designed in the early 2000s to provide more energy and more lethality for Special Forces teams using AR rifles. Capable of firing bullets weighing up to 600 grains, the more popular weights for hunting are in the 250- to 325-grain range because they shoot flatter and carry higher energy along their trajectory curve.

Additionally, the .458 SOCOM ammunition fits in standard metal GI 5.56 magazines because the two cartridges are the same length. They are not, however, the same diameter.

You can fit seven .458 SOCOM cartridges in a 20-round GI magazine, 10 in a 30 round magazine. That’s a lot of firepower available in a hurry. Most hunting loads generate energy levels north of 2,200 foot-pounds, making this an excellent choice for bear defense.

The Beast is aptly named, with its heavy 14.5-inch barrel crowned with an aggressive Beast Brake. It comes with an RRA Delta CAR adjustable stock that can be customized to fit the shooter and the situation, and the full-length RRA TRO-STD handguard offers plenty of real estate for a sufficient hold on the rifle.

The flat-top receiver is great for mounting optics (a red dot like the new Trijicon MRO would be the perfect choice), and the rifle comes with two short and one standard-length accessory rails. The Beast weighs just 7.6 pounds, fairly light for a dangerous game rifle, but recoil is manageable considering the knockdown power of this rifle.

One note: All .458 SOCOM ammunition should be loaded from the magazine and not directly into the chamber for safety reasons. ($1,540; RockRiverArms.com) 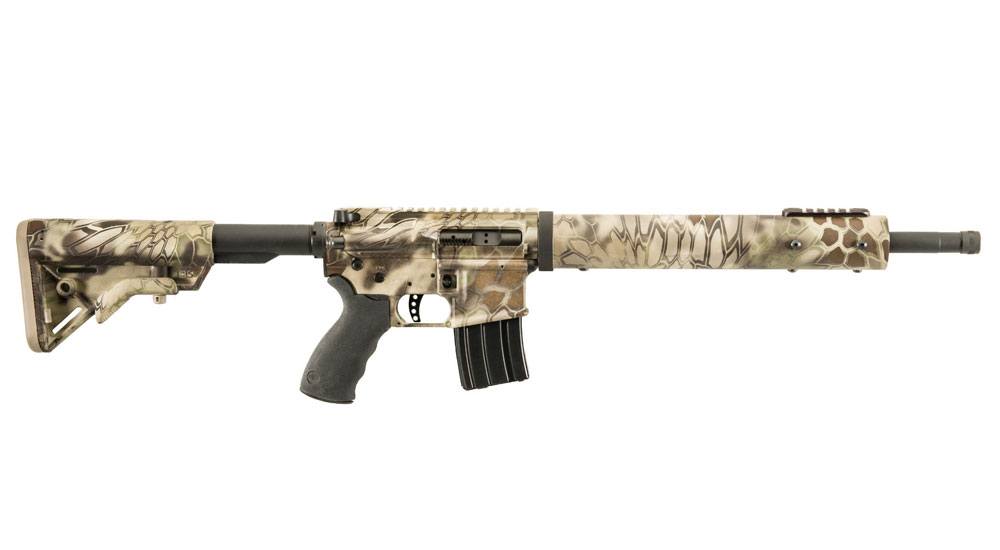 Alexander Arms Hunter in .50 Beowulf
The .50 Beowulf is Alexander Arms’ own design. Based on the .50 Action Express and modified to function in AR rifles, the Beowulf ups the AR ante when it comes to power.

Like the SOCOM, it began life as a cartridge designed to offer a horsepower upgrade over the standard 5.56×45 cartridge, and it does so stunningly. The cartridge found favor with military and law enforcement agencies because it wouldn’t bounce off window glass in vehicles, but it certainly has applications for hunting large, dangerous game as well.

For starters, the cartridge generates between 2,200 and 2,800 foot-pounds of energy and places a half-inch hole in whatever it strikes. Alexander Arms offers a variety of loads for the Beowulf, including 350-grain brass spitzer and XTP loads that will work for hunters. The cartridge has plenty of power for short- to moderate-range hunting of species like bear, elk, moose, large feral hogs and even bison, and it serves as a functional backup gun in bear country.

Like the Beast, the Alexander Arms’ flattop design makes it easy for mounting optics, and the rounded handguard is comfortable and offers a stable grip. The stock is a B5 Systems SOPMOD Bravo, which is collapsible, and the gun comes with the company’s Tactical Blade Trigger. It’s a serious dangerous game AR designed for the largest, heaviest game. ($1,750; AlexanderArms.com) 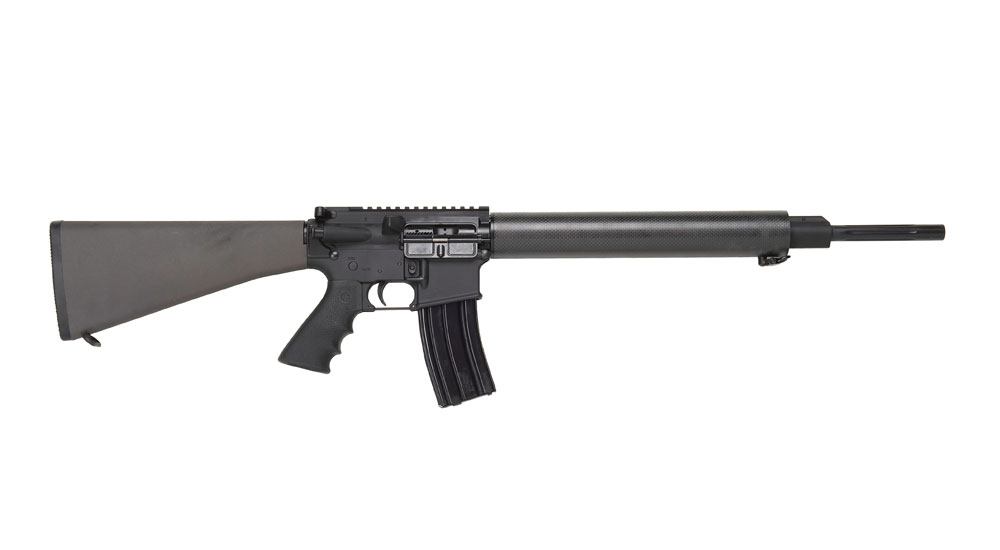 DPMS Lite Hunter in .338 Federal
The sleek Lite Hunter from DPMS is a featherweight by AR standards, weighing in at less than 8 pounds. This reduced weight is achieved with the help of a lightweight barrel profile as well as a carbon fiber free-float handguard.

The Lite Hunter is devoid of all unneeded features and comes with an A2 stock, a flat-top extruded 7029 T6 upper and a two-stage match trigger. It’s a sleek, impressive design that works very well in the field.

The Lite Hunter is chambered in a number of standard AR-10 class cartridges: .243 Winchester, .260 Remington and .308. But it’s also available in the often overlooked and extremely versatile .338 Federal, which is based on a standard .308 Winchester cartridge necked up to use available .338-inch bullets.

The caliber is capable of producing better than 3,000 foot-pounds of energy and, since it is based on the .308, brass is widely available. The .338 Federal is an effective and efficient deer and hog cartridge and a very good elk and moose cartridge.

It provides plenty of power for defense against large bears, and it has a trajectory curve that is relatively flat. It’s certainly one of the most versatile cartridges on this list.

Plus, if you switch between a bolt gun and an AR, it’s a great choice because Savage and other companies make bolt-action rifles in the same caliber. It’s a cartridge that’s capable of taking anything on the American continent. ($1,499; DPMSInc.com)

NEMO Arms Watchman & Omen in .338 Winchester Magnum
NEMO has challenged the notion of conventional AR designs and caliber offerings with the introduction of powerful new rifles chambered in .300 Winchester Magnum and, recently, the .338 Winchester Magnum. These cartridges are better than five decades old, but they have proven themselves as two of the best all-around cartridges for large, dangerous game like bears. Both the .300 and .338 are capable of delivering more than 4,000 foot-pounds of energy, and both have earned enviable reputations for long-range work.

Just how widely accepted are they? In a survey I did of Alaskan brown bear guides, the .338 Winchester Magnum was recommended more than any other cartridge, and there are actually more animals in the Boone & Crockett record book that have been harvested with the .300 Winchester Magnum than the .30-06. Ammo is widely available, and there’s a huge selection of tough hunting bullets for both cartridges.

The NEMO line has expanded greatly over the last few years. Some of its most popular offerings are the OMEN ASP, a lightweight MSR that is chambered in .300 Win. Mag.

It has a hard-anodized finish 7075 billet receiver, a 16-inch barrel, nickel boron bolt release, enhanced magnum buffer, Geissele two-stage trigger and much more. Best of all, it weighs just 9.4 pounds and is extremely accurate.

The larger Watchman 2.0 features a long 24-inch barrel for maximum velocity and flat trajectory. If you’re serious about hunting big game like elk and moose at extended range with a precision built AR, the offerings from NEMO are a good place to start looking. ($5,000- ; NEMOArms.com) Bushmaster 450 in .450 Bushmaster
What if you could simply swap your AR upper to go from a varmint/predator/target rifle to a serious big-bore, bear-stopping defensive round? That’s the beauty of the .450 Bushmaster – like the .458 SOCOM, you can buy an extra upper for your AR rifle and you’ve got a big bore in tow.

The .450 Bushmaster cartridge is capable of attaining 2,200 feet per second from a 20-inch barrel and generating almost 2,700 foot-pounds of energy, a substantial blow from an AR-15-based rifle. That’s on par with the .308 Winchester, and the Bushmaster delivers a much larger diameter bullet.

The .450, when sighted in 2.5 inches high at 100 yards with a Hornady 250-grain FTX, is 3.4 inches low at 200 yards, a respectable trajectory curve. The big .452-inch bullets are capable of delivering serious big-game stopping power at close range, and there’s no doubt that this rifle would work well on the largest deer.

But if you have an AR-15 and are looking for bear medicine, then the .450 might be just the ticket. It’s relatively light (especially with a 16-inch upper), and so long as Hornady is supplying ammo, it won’t be hard to get your hands on factory loads.

Of course, you can buy complete rifles from Bushmaster, but the company’s prime seller has been the upper, which is far cheaper for the current AR owner than buying a brand-new gun.

This is certainly a great caliber for backup in bear country, and you could pack your 5.56 upper in your gear bag on a western hunt so you could chase elk or bears and, when you are tagged out, swap uppers and spend a few days shooting rock chucks. ($600- ; Bushmaster.com)