Want a black powder revolver but don’t know where to start? Here are a few of the best models currently on the market.

A common stereotype regarding black powder revolvers is they are dirty, slow loading and inaccurate. Luckily, only two of those things are true. You can expect excellent accuracy out of these old wheelguns if you know how to load them properly, but the affair will be neither clean nor fast. As firearms technology progressed over the years, a great deal of knowledge concerning black powder revolvers has been lost. While their designs are antiquated today, even some of history’s most famous duelists, such as Wild Bill Hickok, used cap-and-ball revolvers well into the cartridge era. This brings us to the first of five highly recommended black powder revolvers. Wild Bill’s favorite pistols were Navy revolvers, and he had one on him during his famous duel with Davis Tutt—widely considered the first-ever quickdraw showdown. Tutt was shot once in the chest at 75 yards and was killed near-instantly. Many folks today wouldn’t believe that a little .36-caliber ball has that capability. However, when the Colt Navy was introduced in 1850, it was the premier weapon of its day and is mentioned substantially in period literature where it is praised, even over the later Army version. You too can get in on the action for a relatively low buy-in price. Not only is the Uberti Navy affordable, but it is also quite cheap to shoot and very accurate to boot! This is a great starter gun for new black powder revolver shooters and easy to become proficient with.
MSRP: $349-399 If you have a flair for the old but want some of the features of the new, the Taylor’s 1858 Target is the gun for you. It is a cap-and-ball revolver but features modern-style target sights that are fully adjustable. A large part of the difficulty surrounding fixed-sight black powder revolvers is that their point of aim and point of impact may vary by a magnitude of feet past a certain range. For those who want the extra challenge of hunting with a black powder revolver, this particular model makes it easier to get on target and stay there. Taylor’s also has a conversion cylinder that allows this model to fire low-pressure .45 Colt cartridges.
MSRP: $607.88 The LeMat is certain to draw attention at the range… or wherever else you want to take it. Not only is it a staggering 9-shot .44 caliber revolver, but it also has an integrated 20ga smoothbore barrel! You're packing ten rounds with this bad boy, one potentially a load of buckshot. This pistol isn’t a new invention, utilized by Confederate cavalry during the Civil War. It is certainly the most expensive black powder revolver on this list, but it is arguably the most unique and visually striking as well.
MSRP: $1,383.53 The Colt-Paterson revolver is considered to be the first successful revolver design in history. It was patented by Samuel Colt in 1836 and is the ancestor of all modern revolvers we have today. It has a ‘hidden trigger’ that pops out when the hammer is cocked, making for a rather unique appearance. This Pietta is a working and firing copy of the original design and would make a rather good conversation piece at the range. Of interest is that the Paterson was created concurrent to the fall of the Alamo, which also occurred in 1836. The parties involved largely had flintlocks, which few realize overlapped with the original Colt revolvers.
MSRP: $890 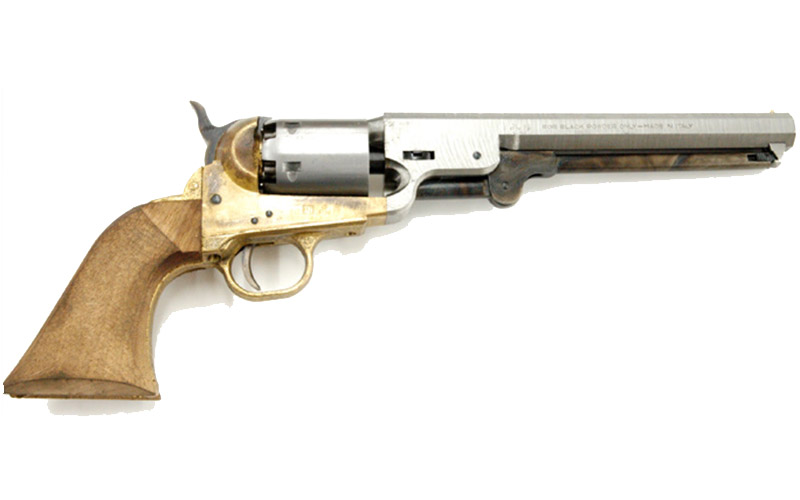 If you are in the mood to try a revolver build or learn more about their internal workings, the Dixie build kits are worth considering. Available in various models, they come pre-fit but unfinished and without engraving. They present a great opportunity to experiment with metal finishing and various types of scrollwork, should you want to get practice on a real gun without having to buy and strip down finished examples. It’s not particularly challenging to put one of these kits into working order, but for many, the real work is in creating a visually appealing final product.
MSRP: $245 A bonus pick is the Taylor’s Howdah black powder pistol. While not a revolver, it is a pretty cool little gun that has a great deal of history behind it. It was designed as a self-defense gun for hunters riding on the backs of elephants, mainly as a deterrent against tigers. It has 20-gauge smoothbore barrels and can use a variety of shot types. Because it uses standard revolver caps, it is a good companion for your other black powder revolvers.
MSRP: $1,036.21