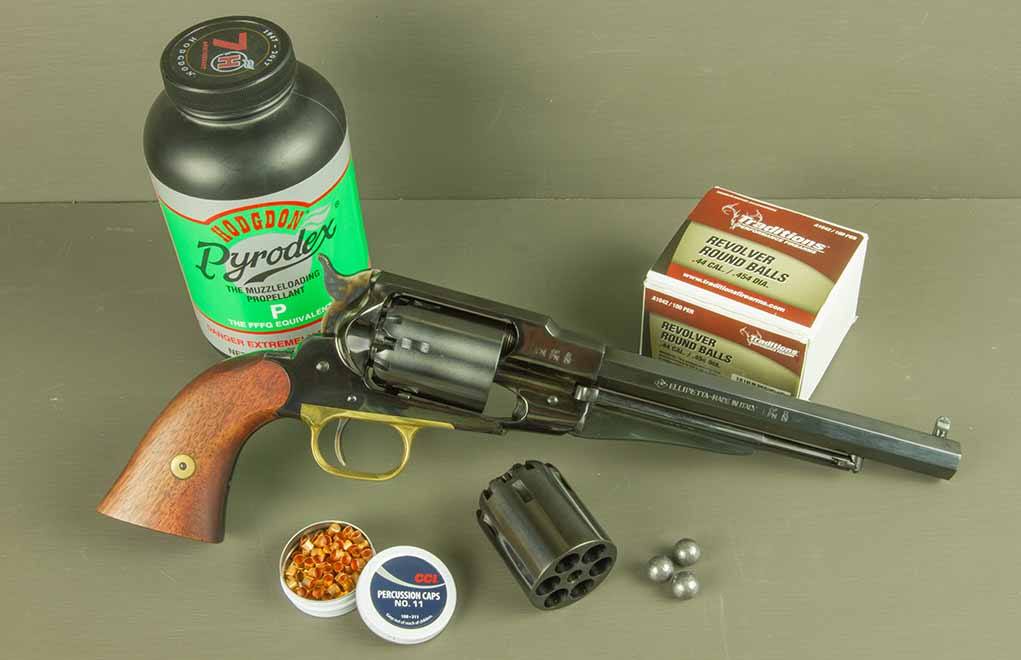 There’s a major nostalgia factor to blackpowder shooting in general and the cap-and-ball revolver in particular, and an appreciation for just how far things have come.

How To Load A Cap-And-Ball Revolver:

Many shooters today have never handled an old firearm that’s loaded one chamber at a time with blackpowder, ball and percussion cap. Yet, when introduced, these guns were state-of-the-art and were a great step forward in weaponry. They were used to put food on the table, for fighting wars, for self-defense and in sporting contests.

While old cap-and-ball firearms can still be found, many should not be fired because of their historical value or deterioration due to age and the effects of corrosive blackpowder that was used to propel projectiles. But some modern manufacturers make replicas of the old guns, which today’s shooters enthusiastically use for enjoyment, competition, hunting — and for a taste of how things used to be.

I recently had the opportunity to revisit and reexamine the techniques involved in shooting a cap-and-ball revolver. While there are many replica blackpowder firearms made these days, I’ve been impressed by one imported by Traditions Performance Firearms and made in Italy by Pietta. It’s based on the 1858 Army cap-and-ball revolver that fires a soft, round lead ball of .454-inch diameter, although the caliber is designated as .44. During testing, it performed flawlessly.

Some may say that cap-and-ball shooting is a lost art, but that’s not true: It’s alive and well, though the inner circles of aficionados has certainly subsided. That said, the Single Action Shooting Society (SASS) sanctions blackpowder shooting events where competitors use guns of old design.

To make the old model gun go bang, a propellant is ignited by a percussion cap. But because blackpowder creates a great deal of residue when burned, some sort of lubricant or softening agent is also needed to keep the barrel and mechanism from fouling so badly that accuracy is completely degraded — or the gun will not function.

The lubricants used by old timers were natural lubricants, such as animal fat, which served to soften fouling. Today, we have modern commercial lubricants like Wonder Lube. Not only does lubricant serve as a softening agent, it also, when placed on top of the ball in a loaded revolver cylinder, decreases the likelihood that a spark from one chamber will jump to another chamber and ignite it. That’s called a chain fire — and it’s not a good thing.

Blackpowder is a concoction of charcoal, sulfur and potassium nitrate, also called saltpeter. It creates a great deal of smoke when ignited and, as mentioned before, leaves much fouling. Fortunately, it’s no longer necessary to use blackpowder in the old or replica firearms; instead, substitutes like Pyrodex are available.

While Pyrodex and other substitutes have approximately the same amount of stored energy per volume as blackpowder, and they behave similarly, they generally leave somewhat less residue. They’re also not subject to the strict storage and shipping regulations that blackpowder is, and therefore retailers are more likely to carry substitutes — which make them easier to find on store shelves.

Bullets, then and now, are soft lead round balls or conical bullets. People used to make their own by melting lead and pouring lead into molds, but today it’s easier to purchase them off the shelf.

It’s your choice, but I found that, although slower, I was more certain that powder would not be forgotten if each chamber was loaded fully before going to the next. My shooting partner at Gunsite forgot to put powder in one chamber and had to pull the ball by hand. That can happen to the best, experienced shooters, of which he is one.

Blackpowder or similar substitutes are measured by volume, not weight. Pyrodex R is for revolvers, and the manufacturer, Hodgdon Powder Company, says it’s designed to be a direct replacement by volume for blackpowder. So, when loading, follow the manufacturer’s recommended loads which, for the sample revolver, Traditions says is between 22 grains and 30 grains by volume. And don’t load directly from an open canister. Use a field flask or a dipper from a small container of powder. Remember, a spark ignites this stuff easily.

The next step is to seat the projectile, be it a round ball or a conical bullet. When doing so, use the revolver’s built-in rammer, or a separate tool that can be used to load a cylinder while off the gun. Seating the ball will take a bit of force, but this is good because if the projectile is of the correct size, a slim ring of lead will be shaved off to indicate a tight seal between the projectile and the chamber. You want this. And the projectile should be resting against the felt wad or powder so there’s no air gap.

Then, seal the mouths of the chambers with suitable grease or some type of seal made for that purpose. This is supposed to prevent chain fires. Loose grease can be used, but it’s easier, although more expensive, to use Wonder Seals or an equivalent. Smash the Wonder Seals down a bit so they seal the chambers.

Finally, a percussion cap is fitted to the nipple of each chamber on the cylinder. The Pietta revolver called for either No. 10 or 11 caps, with No. 11 caps being slightly larger. I also found the No. 11s to be more user friendly because, although the sides of the caps needed to be pinched a bit to stay on the nipples during recoil, they were easier to fully seat. With No. 10 caps, the fit was so tight that they had to be forced onto the nipples. Too much force could cause them to ignite, and too little would result in a misfire or delayed firing.

Spare cylinders are also available for some revolvers. While some may need to be fitted, others, like those for the Pietta 1858 Army, can be bought off the shelf and dropped in. Carrying a spare loaded cylinder — minus the caps, which should be put on after the cylinder is in the gun — saves loading time.

While it was customary in the 1800s — and most of the 1900s, for that matter — to shoot handguns with one hand, it has now become standard to shoot with two hands. A single-action revolver must have the hammer cocked before the trigger is pressed, and the most efficient way to do this is with the support-hand thumb.

After the gun is fired and before reloading the cylinder, the used caps need to be removed from the nipples. However, at least with caps by CCI and the test gun, the caps ruptured when fired, and if the hammer was cocked quickly, flew off the nipples due to centrifugal force. This eliminated the need to remove them by hand.

Recoil with the Pietta, while present, was very mild and in no way a nuisance. And accuracy was satisfactory with groups off-hand at 7 yards being easily covered with an open hand. The sights, while not very good by today’s standards, were a narrow front blade and a trough along the top strap.

Cleaning is best done the same day after shooting so that the metal doesn’t corrode. And black-powder or the residue from substitutes is cleaned using lots of hot water and detergent. Commercial cleaners, like Easy Clean from Traditions, is also good.

First, remove the cylinder, then the stocks — or grips — and in the case of the Pietta, the brass trigger guard, then soak all in hot water and detergent or spray liberally with Easy Clean until the fouling is softened. Swab out the bore and cylinder, wipe everything down and apply a thin coat of oil to prevent rust.

A blackpowder revolver will definitely slow down the shooting process and allow more time for enjoyment while you learn to appreciate what the old timers had to do to put food on the table, and to protect themselves and those they love.

This article originally appeared in the December 2018 issue of Gun Digest the Magazine.