Despite my initials, I have no intention of leading you into pastures of bovine manure when it comes to survival gear, friends. Neither does the rest of the Living Ready staff. Case in point: the Living Ready Store.

On a daily basis, we receive solicitations from survival gear companies to place products in our store. While this is certainly flattering, our response is always the same: Send a sample for us to test, and we'll add it if we like it. That leaves some products out in the cold and others straight to the highlight reel.

So when it seems like I and the Living Ready team are trying to sell you something, it's because that's exactly what we're doing. We're trying to put the best survival gear we could find into your hands. We don't want you to get lost on Amazon or Biff's Survival Website for Chumps and wind up with junk.

That said, it's about time for a rundown of the best survival gear in the Living Ready Store. The categories are:

The PowerPot is the reigning champ of innovative survival gear products. It converts hot water into electricity for charging batteries and gadgets. It's simple, easy-to-use and packs a massive “cool” factor.

Not that there's anything cooler than having electricity during an emergency in the first place. But when you think of the best survival gear innovations of the 21st Century, this is on top. You can read my full review here or order the PowerPot for $149 from LivingReadyStore.com right now. The great advantage of the Goal Zero Yeti 1250 Solar Generator Kit is what it doesn't do. Unlike gasoline- and diesel-powered portable generators, this one doesn't make noise or require it be used outdoors.

This is a bigger deal than some might think. Gas generators have a tendency to walk away, especially during a crisis where people are desperate.

The Goal Zero Yeti 1250 can be brought indoors where it's safe. It packs enough juice to run an entire house for a day or two. It can then be recharged with the included solar panels or a wall outlet prior to a disaster. That means no worrying about gas stations running dry. Any rocket stove worth its weight must use scrap fuel (think twigs and branches) in the most efficient way possible. The EcoZoom Versa gets things hot in a hurry using minimal fuel sources and a smart design that actually doesn't try to kill the person using it (imagine that!). Living Ready contributor Charley Hogwood of P.R.E.P. reviewed the EcoZoom Versa with flying colors, and he has the bacon to prove it.

Even better, for each Versa sold, EcoZoom will donate a rocket stove to a needy family. Now that's a true commitment to preparedness.

Click here to order the EcoZoom Versa for $129 from the Living Ready Store.

While dedicated water filters like the LifeStraw are indeed phenomenal products, they don't often leave survival kits. The modern prepared person needs something that works well for survival, but doesn't scream “look at the weirdo” when you bring it everywhere you go.

The Aqua Vessel Insulated Filtration Bottle is the solution. It marries form and function into a stylish, insulated bottle. Inside is a filter that removes 99% of nasties. It'll fit in at the office, the gym, hunting camp or when the SHTF.

Boy oh boy, did I catch flak from readers the first time the premium Icey-Tek ice chests were featured in the Living Ready newsletter. “You want $325 for a cooler? A cooler!?” was about the gist of it. But sure enough, the Icey-Tek line of insulated ice chests proved to be the best-selling items at Living Ready Store for several months.

Here's the deal. Icey-Tek ice chests aren't like the coolers you find at the gas station. These are more like electricity-free refrigerators that keep contents cold for days and days – not just an afternoon of fishing. The passage of time means nothing inside an Icey-Tek cooler. I wouldn't be surprised if Keith Richards from the Rolling Stones slept inside one of these things.

Click here to order an Icey-Tek ice chest in the size of your choice. I'm a knife nut. I originally started at F&W Media (parent company of Living Ready) as a print editor for BLADE magazine a few presidential elections ago. As such, I look at knives like I look at steak: If you have to melt a bunch of cheese on top to sell it, there must be something wrong with what's underneath.

Simplicity is deceiving. That's why the best knifemakers in the world are constantly churning out “oh, I could do that”-looking knives and selling them for thousands of dollars. It's harder than it looks.

The Living Ready team sorted through a ton of stellar survival knives to find the best. Then we crunched the numbers to see how we could get one of those to you for under $100.

We did even better than that and wound up with the SOG Team Leader for under $50. It's a full tang, fixed blade knife ready and willing to be beaten and pounded on like the Vikings defense (sorry, but I'm a Packers fan). But in this case, there's no cheese necessary. The SOG Team Leader is without a doubt the best survival knife for the money. The SnagMag‘s popularity comes from its “wish I'd thought of that” design. It makes carrying a spare pistol magazine in your pocket a breeze. Handgunners and concealed carry permit holders, this is one for you.

Order the SnagMag from the Living Ready Store for $33.96. 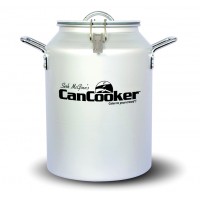 Wait, what? The CanCooker?

The four-gallon CanCooker came to the Living Ready Store from the folks at Deer & Deer Hunting. They had hunting camp meals in mind, but I found its true calling is as a survival kit canister.

Fill up all four gallons of the CanCooker with your survival kit essentials and a desiccant pack, then snap the lid shut for an airtight seal. This will keep gear dry and secure.

You could get the same functionality out of an ammo box, but you'd be missing what the CanCooker was designed to do all along: cook things. In an emergency, unpack your survival gear, then use the CanCooker to boil water and cook food. It doesn't get better than that.

Click here to order the CanCooker from the Living Ready Store for $79.99.