The Smith & Wesson Model 629 is a heavy duty .44 Magnum revolver that's the perfect protection for city and country.

For many years after its introduction in 1955, the .44 Magnum was often referred to as the most powerful handgun cartridge in the world. Several other handgun cartridges have exceeded its power since then, but it still remains a powerful round that is capable of taking most North American big game.

Smith & Wesson’s Model 29 was the first production revolver chambered for the .44 Magnum, and sales skyrocketed after Clint Eastwood’s portrayal on the big screen of Inspector Harry Callahan, aka “Dirty Harry,” who dispatched the bad guys with one. Stories still circulate about movie fans buying a Model 29 and a box of cartridges, then after shooting one cylinder full of six, selling the gun and the remaining cartridges because of the sobering recoil. The Model 29 beget the Model 629, which is a stainless steel version of the gun. Both guns, the 29 and 629, have been in the S&W inventory for many years and continue to be excellent choices for the shooter who is seeking a recreational revolver that can also serve as protection against dangerous game, wild predators or humans intent on causing bodily harm or death. So, the Model 629 reviewed here is a versatile choice.

One feature that makes the Model 629 so versatile is that not only will it handle the most powerful .44 Magnum loads, it can also safely fire .44 Special cartridges because that round is less powerful, is .125 inches shorter than the Magnum and comfortably fits in the chamber. The .44 Special not only generates considerably less recoil, making it pleasant to shoot for fun or practice, it is also a popular self-defense round with ballistics about the same as those of the revered .45 ACP. And because it is less powerful than the .44 Magnum, it generates less muzzle rise, allowing the shooter to get back on target faster for follow-up shots.

Some people want that extra magnum power though for personal defense against human predators, and carry the Model 629 loaded with .44 Magnum rounds. Generally, the ammunition chosen is a hollow point design with a projectile weight of 180 to 240 grains. At the speeds generated by the magnum load, expansion and penetration both combine to deliver serious damage on the receiving end in order to stop felonious behavior.

But the 629 offers even more versatility. When loaded with heavy, hard-hitting, solid projectiles, it is an effective defense against bears and other wild predators. So why not use hollow point expanding projectiles against bears? The answer is lack of penetration. Bears are big animals with thick hides that are much tougher than the human skin. Bears also have massive bone structures and tough muscles that work together to protect the animal and make it more difficult to reach vital organs. And doing damage to vital organs is necessary to stop a bear in the midst of a charge. A hard cast 300-grain or heavier bullet has the energy to penetrate hide, bone and muscle and do serious damage to internal organs, where a hollow point bullet is more likely to begin expanding on impact, which slows it down and reduces penetration, so it may not go deep enough to inflict charge-stopping damage.

“Penetration is key, so hard cast or solid bullets are recommended for bear defense,” says Il Ling New, professional hunting guide and Gunsite Instructor who teaches, among other classes, Predator Defense. She adds, “At Gunsite, we recommend that a charging bear be shot in the face—ideally between the eyes and nose—to stop a charge as soon as possible. Other shots may take too long to stop the bear before it can do damage.”

Many ammunition manufacturers produce .44 Magnum and .44 Special loads with a variety of bullets suitable for anything from punching paper to dropping big, tough game. So obtaining ammo is not difficult. Ammunition is supplied by major manufactures and smaller specialty manufacturers who specialize in certain loads and cater to select clientele. And the S&W Model 629 will handle them all. 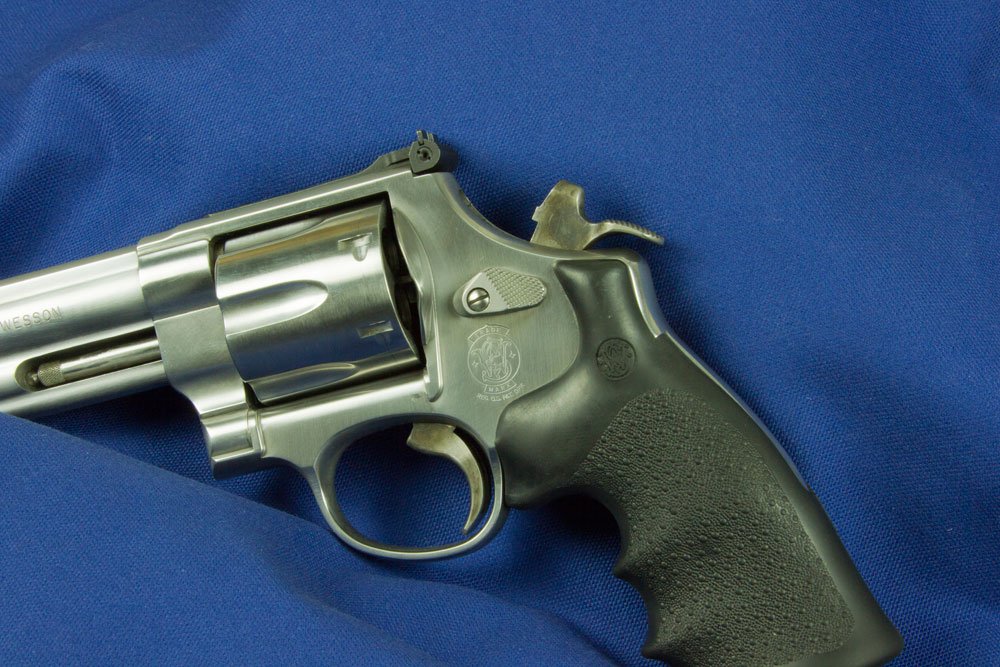 While the Model 629 is available in a variety of versions with different features, a 4-inch barreled standard version was evaluated for this article. The 629 is a large frame revolver built on S&W’s N frame, which is well suited for the recoil and pressures associated with the .44 Magnum. The gun has a bright, polished stainless steel finish with the familiar Smith & Wesson logo on the left side just below the cylinder catch.

Up front, the gun sports a blued steel ramp sight with a bright orange insert that demands attention when aiming. The rear sight is also blued steel and is adjustable for both windage and elevation by turning adjustment screws. It has a white outline to aid in acquisition when in a hurry. Since the gun can accommodate so many different .44 Special and .44 Magnum loads, an adjustable sight is an excellent feature because changing loads invariably shifts the point of impact. And an accurate zero is necessary, especially if using the gun for self defense or defense against wild predators. The underlug beneath the barrel extends about two thirds of the distance to the muzzle. The hammer and trigger appear to be made of carbon steel, and the hammer spur is aggressively checkered for good purchase if the shooter chooses to thumb cock the revolver. The trigger has a polished, wide face that encourages a smooth, consistent trigger press when shooting the revolver double action. The double-action trigger pull on the test gun measures 13.5 pounds, whereas the single action breaks crisply at just under 4 pounds with a bit of overtravel.

A fluted cylinder on a swing-out crane has a six-round capacity, and the cylinder catch is easily activated to release the cylinder by pushing it forward. Older versions of the Model 629 were equipped with one-piece synthetic grips featuring a stippled texture and distinct finger grooves to anchor the gun in the hand. However, the newest model has a slightly different grip with less pronounced finger grooves and a cushioned backstrap to help reduce the effects of the stout recoil that the .44 Magnum can generate with heavy loads. Shooting the Model 629 can be a pleasant experience or, depending on the shooter’s tolerance for recoil, a bit distressing. Because the gun weighs 41.5 ounces, which is about 2.5 pounds—more for those with longer barrels—most shooters can comfortably handle shooting light .44 Special loads. The traditional 240-grain .44 Magnum loads are manageable by many shooters unless a large number are fired in a single session. The heavy loads made for hunting or predator defense, those around 300 grains or more, generate what most shooters would call punishing recoil, and firing a few rounds in a session will satisfy them. Of course, there are shooters with a higher tolerance for recoil.

The Model 629 can be a very accurate gun in the right hands and is capable of delivering tight groups. The test gun delivered groups at 25 yards averaging just over 2 inches, and shooters with very sharp vision and the proper technique can probably get better results.