Born too late to fully capitalize on the pocket pistol craze, the Seecamp .32 still became many people’s go-to backup piece for years to come.

Pocket pistols are simple in theory, but the history of the concept’s development suggests otherwise. Since the auto pocket pistol concept was first introduced with John Browning’s Colt 1908 Vest Pocket, there have been attempts to make them in a wide variety of calibers, sizes and qualities. What started as a gentleman’s uber-concealable defense piece eventually branched off into the realm of Saturday night specials as well, somewhat damaging pocket pistols’ overall reputation. There was one pocket pistol, however, that's innovative design kept it a popular choice despite the overall reduction in the concept's popularity. That pistol is the Seecamp .32, and its designers managed to squeeze a lot of quality into a very tiny gun.

The L. W. Seecamp Company was founded in 1973 by Ludwig Seecamp, a German immigrant to the United States. Classically trained as a gunsmith before the war, after moving to America he spent several years working as a designer for Mossberg before retiring and establishing his own company which would specialize in double-action 1911 conversions. As new double-action .45s like the Browning BDA were released, Seecamp’s 1911 conversions were being pushed out of the market and he felt the need to release something new.

By 1968 most pocket pistols were cheap imports, but the 1968 Gun Control Act’s “sporting clause” seriously restricted what pistols could be brought in. Aiming to capitalize on this void in the market, Seecamp released his LWS .25 in 1981.

Hammer-fired and double-action only, the LWS .25 was based on the Czech CZ-45 but managed to be even smaller. The .25 model was around long enough to prove that the design had merit and that people were willing to buy it, but only a few years after its introduction it was replaced by the .32 caliber version which is still being produced today.

For most of the Seecamp .32’s production, it has been overseen by the original Seecamp’s son, Larry. Continuing in his father’s tradition, during this time every Seecamp pistol was made the old-world gunsmith way: individually and by hand. While the resultant pistols were of very high quality, with only about seven workers on staff this was a very expensive and time-consuming process which resulted in over a year’s worth of outstanding orders to accumulate. For those who would like a Seecamp pistol, however, a positive change to production occurred in 2014. As Seecamp’s original master gunsmiths retired and Larry Seecamp was unable to find replacements for them, he sold the entire business to the company of a family friend, Whalley Precision. The general consensus since the takeover is that the pistols’ quality has not reduced any, but they have become much more readily available and for much better prices. Today Whalley Precision still produces LWS pistols in .25 ACP, .32 ACP and .380 ACP.

Nothing can be designed without intent, and the intent behind the Seecamp pistols was self-defense. While this is thankfully a common and socially acceptable reason to own a pistol today when the Seecamp .32 was released this was not the case. Sections of the owner’s manual were actually published in firearms magazines because of how unorthodox it was to unapologetically claim that your pistol was designed for self-defense against other humans. In a time when other companies were still pretending that their Saturday night specials were intended for target shooting or sporting purposes, it took guts to be honest about your design’s capabilities.

The reality of Seecamp pistols’ capabilities is that they are decidedly not for sporting purposes, as otherwise they likely would have had sights of some kind. The Seecamp was designed from the ground up to be a last-ditch, point-and-shoot self-defense weapon, and its only safety is its 11.5-pound DAO trigger pull.

Seecamp .32s utilize a chamber-ring delayed blowback operating mechanism, unlike the direct blowback action of the original LWS .25. While .32’s higher pressure necessitated a new operating mechanism, it is still a light-enough recoiling round to be very pleasant to shoot even out of a small gun. This easy controllability is likely why the .32 Seecamp remained the most popular model even after the introduction of the LWS .380.

As a purpose-built self-defense pistol, the Seecamp .32 was designed around the only .32 hollow points available at the time and would fail to cycle anything else. While some considered this a downside, others viewed it as a reasonable compromise to make the Seecamp the best possible defensive pistol it could be. Partially thanks to the Seecamp .32’s popularity, there are now a wider variety of defensive .32 hollow points that are produced and that function properly in a Seecamp system. Every Seecamp model has a 6+1 capacity and a heel-style magazine release. 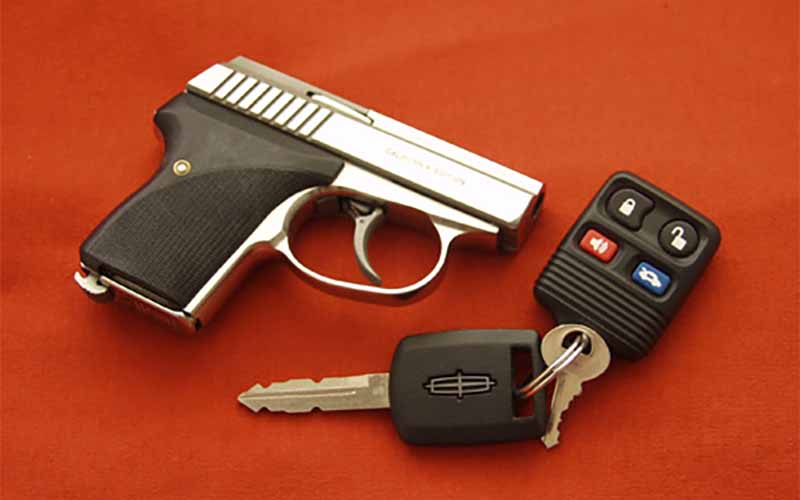 Since the Seecamp .32’s release, it has been a favorite backup gun for police officers across the country. Ideally sized for a pocket or ankle holster, these make great emergency deep concealment pieces whether you have a badge or not. They are surprisingly ergonomic for their size, making it no surprise that the gun’s general characteristics have been copied by at least two other manufacturers since its introduction. Now that the backorders have been filled and one can be purchased new right off the shelf, there hasn’t been a better time to add a Seecamp to your collection. MSRP is $510 for the LWS .32, a fair price for what may be the greatest pocket pistol ever made.