What do you get when you cross a time-tested platform with the most popular centerfire handgun cartridge? The 9mm revolver. Here are five that are fit to cover your six.

What Are Your 9mm Revolver Options:

Ah… the revolver. Timeless and still highly trusted. Why not? Outside the side-by-side shotgun, few firearms have more on-the-ground, behind-the-trigger practical testing backing up their prowess. Old West gunslinger Wyatt Earp and modern-day New York lawman Jim Cirillo bet their lives regularly on the wheelguns. Both came out winners.

Far from outdated, the revolver is tried-and-true. Even so, the handgun has remained relevant to modern shooters, evolving into more useful and convenient forms. Next to light alloy frames and hammerless designs, one adaptation gaining favor presently is the 9mm revolver. Though, truth be told, the concept is nothing new. Gun designers have squeezed in the 9mm and other semi-automatic pistol cartridges into wheelguns for decades creating classics along the way. The .45 ACP M1917, for instance.

While the 9mm doesn’t have as storied a model to its name, gunmakers have cooked up some dandy revolvers for the cartridge in recent years. Competitive shooters have especially benefited with geeked-out, highly-tuned race revolvers hitting the scene. Smith & Wesson’s PC Pro 986 and Ruger GP100 Match Champion are a couple high-octane wheelguns that come to mind.

Concealed carry hasn’t been left out in the cold. While the selection pales to standby revolver chamberings—.357 Magnum and .38 Special—there are options. And as interest in 9mm revolvers continues to grow, it’s expanded. So, what’s available now? We’re going to take a look with five 9mm revolver options fit for concealed carry. 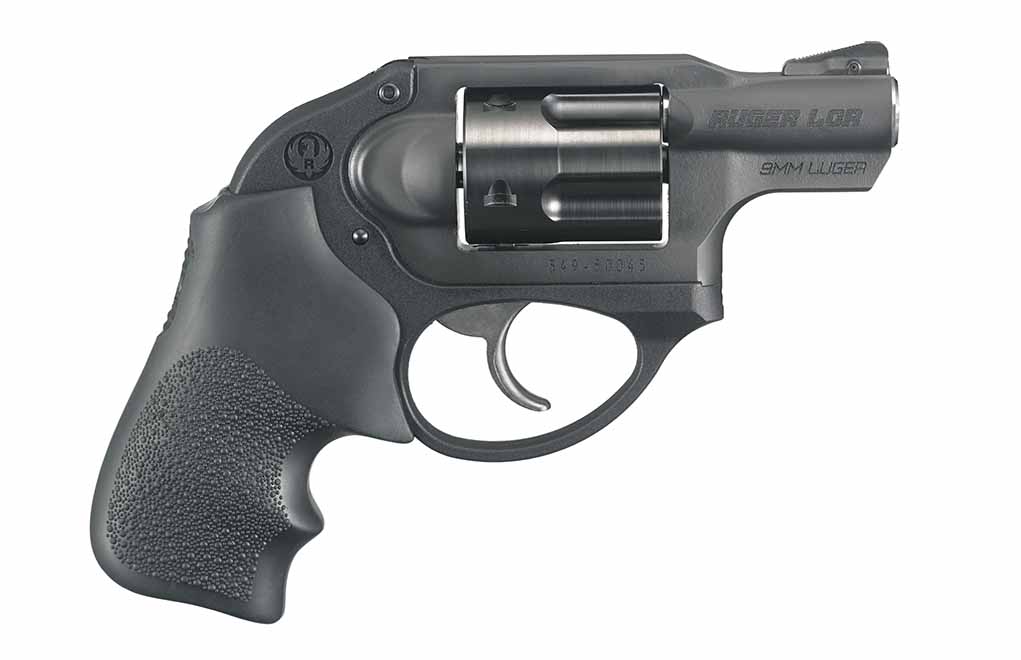 Honestly, the LCR has looks to rival a mud fence. Matte black all around and a cylinder profile reminiscent of a wasp nest, the lightweight 9mm revolver (it also comes in .38 Spc. and .357 Mag.) won’t win any beauty contests. It doesn’t have to, its attractiveness comes from its reliability and convenience, making it among the most cherished modern-day defensive wheelguns.

The LCR’s greatest advantage is eminent concealability, which few other revolvers rival. Weighing in at a hair over 17-ounces unloaded, and boasting an1.8-inch barrel and 6.5-inches in overall length, the gun is unassuming and anything but cumbersome. In turn, you’re likely to carry it every day.
Furthermore, the aircraft-grade aluminum-framed revolver is demure enough to fill a back-up gun role, one which you can dual-purpose ammo with a semi-auto pistol.

Light as the 5-round revolver is, those who are new to snubbies might find it bucky, but that’s nothing some practice won’t cure. Ruger gives you a leg up in this department with an excellent double-action trigger—a must on a DAO gun. Smooth as polished marble, the friction-reducing cam system doesn’t stack and makes the 9-pound pull weight much more manageable.

Optimized for concealed carry, Ruger removed every conceivable snag point, such as an exposed hammer and rear sight (it’s integral with the frame). Additionally, the LCR 9mm is fast on the reload—when you get the system down—utilizing full moon clips. Overall, it deserves its place among the best 9mm revolvers. 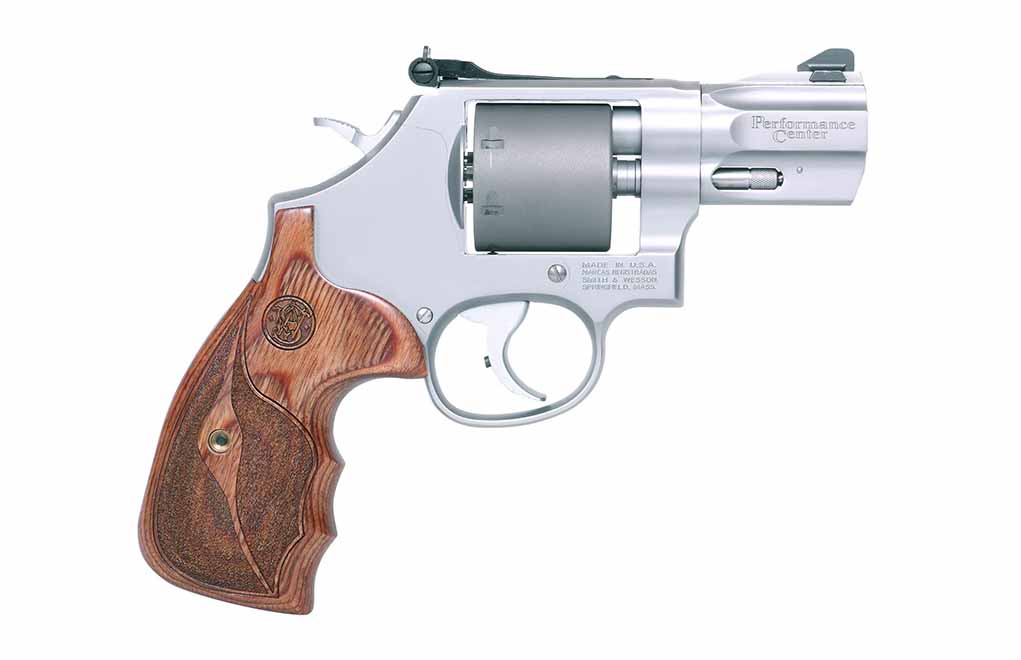 Granted, the PC Pro 986 is a beast of a snub-nose and might not exactly fit every armed citizen’s definition of the ultimate clandestine 9mm revolver. But if overcoming the platform's main constraint—firepower—is your concern the handgun’s extra bulk pays you back 10 fold. Holding 7-rounds in its ample titanium cylinder, the 986 flirts with the capacity of many micro 9mm pistols that have become the hot ticket in recent years.

Tuned as for competition, the revolver is very responsive, particularly its trigger. In double-action it is smooth and lighter than most production modes, vastly improving the 986’s accuracy. At the same tick, shot-to-shot, the revolver is quick thanks to an overtravel stop that ensures efficiency in rapid-fire. Adding to this, the gun comes with an adjustable rear sight, which goes a long way in taking advantage of the other accuracy enhancements.

So, all of this is great, but the Performance Center marvel is still a 31-ounces L-frame revolver, with a William Taft-sized monolithic cylinder. Yes, this adds up to a milder shooter, thus better accuracy. But, it will take some consideration to puzzle out if it fits your carry profile. As do the sights and hammer spur, which all have the potential of hanging up on the draw if you’re not practiced. The 986 is an excellent 9mm revolver, but perhaps not for your first every-day carry gun. Sooner or later, nearly every wheel gunner has an inkling to toy around with a .44 Special. This inevitably leads to one gunmaker—Charter Arms. Its long-standing Bulldog has become legendary at this point, if for no other reason than it’s one of the only dedicated .44 rigs configured for carry. More recently, the company has shown a real knack with 9mm revolvers too.

Starting life a decade ago, the Pitbull is an ingenious system doing away with moon clips—half or full—for spring-loaded ejectors. Just snap a round in the cylinder and there it stays until ejected, just like it was a rimmed cartridge. Anybody who’s dealt with moon clips, particularly well-used warped ones, get the advantage the ejectors offer. Additionally, the feature makes the gun compatible with strip speedloaders, which—while not the fastest—are among the most convenient.

About as plain Jane as a revolver gets, the Pitbull won’t turn any head—aside from an icon of its namesake on the barrel. Matte blasted stainless-steel finish, ramp front sight and integral rear are the order of the day, and the trigger isn’t a polish job for sure. But the gun’s fit and finish are downright decent, and its tight cylinder lockup gives it an overall solid feel and dependable performance. A hammer is part of the package, but the spur isn’t obnoxious. In turn, with a little familiarity, it can be drawn with little worry of getting tangled up. 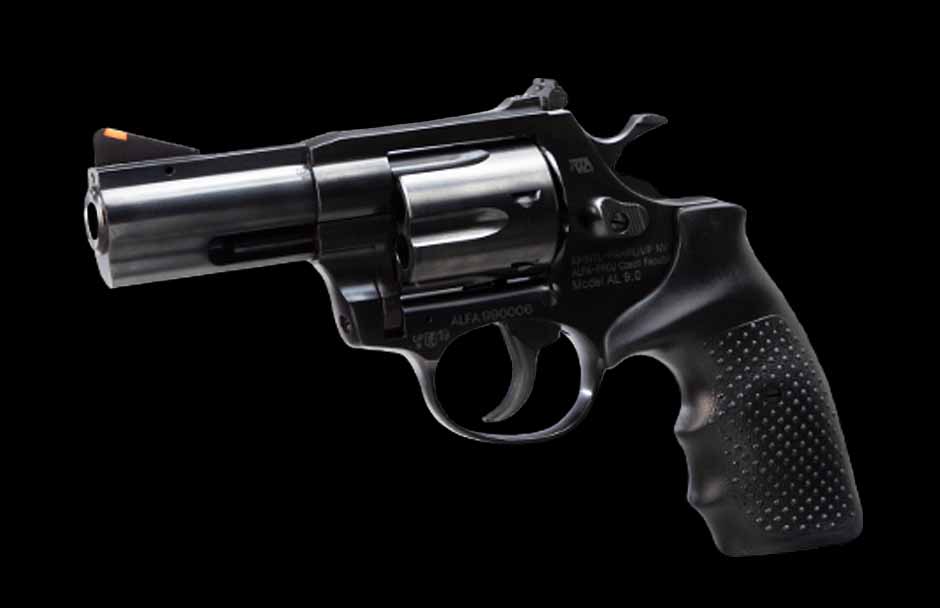 Most think fairly economical 1911 pistols when Rock Island Armory is the topic of discussion, but the gunmaker has proven a more and adept revolver-smith over the years. New(ish) to the gunmaker’s lineup is a jack-of-all-trades 9mm revolver that certainly has the stuff to fill a defensive role. To this end, the AL9.0’s capacity is especially tantalizing, holding 6 rounds of Parabellum and quickly reloading via full moon clips. At the same tick, Rock Island kept the revolver very wieldy and concealable—not the easiest of tasks.

At its widest point, the AL9.0 measures in at 1.5 inches, boasts a 4-inch barrel and tips the scales at 24 ounces—a real “Mama Bear” tale of the tape. What this adds up to is a gun most should find relatively simple to keep under wraps—comfortably. At the same tick, it’s eminently shootable with enough heft to eat away at the 9mm’s already well-mannered recoil. A nice balance, which leads to a revolver with a high accuracy potential even in rapid-fire.

To that end, Rock Island included several features to get and keep the AL9.0 on target, including a full rubberized grip, adjustable target rear sight and splash of orange on the front ramp sight. Minor, the last point is nice to have out of the box. In double-action, the trigger is predictable heavy—more than 10 pounds—but doesn’t stack and is as smooth as you can expect from a piece not dolled up by a gunsmith. The only nit to pick, the hammer spur prominently sticks out, a no-no for many when it comes to concealed carry revolvers. But, if you’re willing to put in the time with the heater, it's more than manageable. 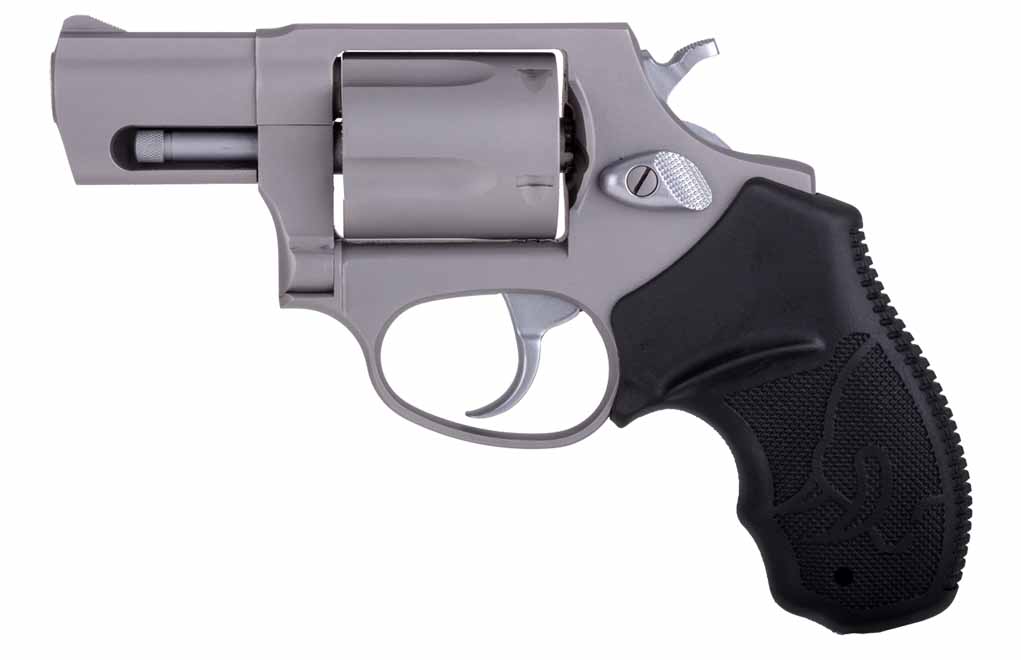 It comes as no surprise Taurus has had a 9mm revolver for some time. After all, the gunmaker has wheelguns chambered for nearly everything under the sun. The 905 has been a mainstay for many for the past decade or so and is a more than capable defensive gun, along with about anything else you’d want out of a 9mm.

Granted, the steel-framed handgun is on the lower end of capacity holding 5-rounds, but that’s fairly standard for a majority of concealed carry revolvers regardless of caliber. The 905 makes up for this by coming in lighter, 21 ounces, and slightly narrower, 1.4-inch width, than other 9mm revolvers. Plus, it’s fairly streamlined with a built-in rear sight (ramp front) and all its edges fairly smoothed down.
The only hitch, at least for some, is the spur on the hammer, though it’s not a dealbreaker.

Handily, the 905 utilizes Taurus Stellar Clips to hold the rounds in place, a neat bit of engineering that makes loading the clips easier than traditional moon clips. Like any 9mm revolver using clips, the gun itself is quick to reload with practice. The one hitch in the 905’s giddyap is a substantial double-action trigger pull, out of the box flirting with 12 pounds.