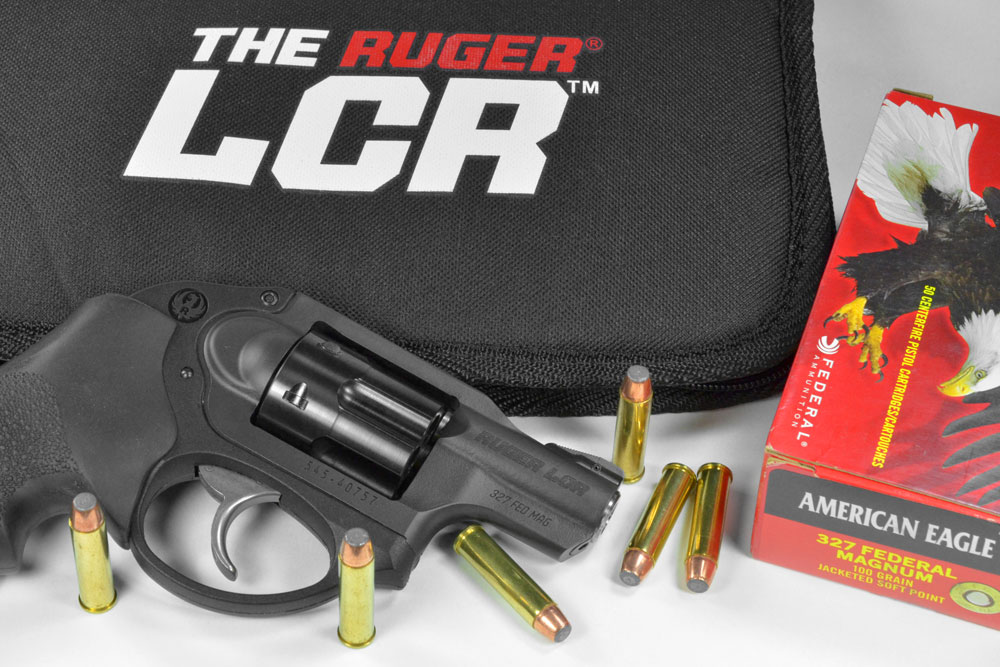 Ah, the belly gun, the snubnose (short-barreled) revolver. Belly guns have a long history and can be roughly defined as any revolver with a short barrel typically intended for concealed carry. I usually associate the name as coming from carrying the gun tucked into the waistband against the belly for quick and easy access. A revolver does this very well because the gun can be positioned for the belt to press against the narrow region between the cylinder and the grip acting as a “holster” to keep the gun in place. Of course, an inside-the-waistband holster will do that and is a much safer method for carrying these guns so that the trigger is not exposed to whatever might snag it. I’m old enough that, when I worked in law enforcement, revolvers were the only game in town. I carried a Colt Detective Special or J-Frame Smith & Wesson in .38 Special as my back-up gun and off duty gun. In later, non-law enforcement years, I often carried a Colt Magnum Carry or Smith & Wesson 340PD as my concealed carry gun. These are chambered in .357 Magnum. I like the power of the magnum cartridge because it maximizes performance from these short-barreled guns. A 2-inch barreled .357 Magnum will launch 125-grain bullets at 1,250 feet per second (fps), which is in the power range of a 9mm+P from a 4-inch barrel.

I’ve carried revolvers and semi-automatics, and I like them both. They both have positive points. I must confess a certain love for belly guns, due in part to their historic/romantic allure as well as their practical nature. They are easily concealed and easily accessed. They are excellent point-and-shoot guns because they don’t have a safety to fiddle with.

The most recent belly gun that caught my eye is the Ruger Lightweight Compact Revolver (LCR). It is a “modern” design because part of the frame is made from polymer that attaches to a metal frame.
The monolithic frames of LCRs chambered in .327 Federal Magnum, 9mm Luger and .357 Magnum are made of stainless steel, whereas frames of guns chambered in .22 LR, .22 Magnum and .38 Special are made from 700 series aluminum. This gun is chambered for .327 Federal Magnum  (more about the cartridge later). LCR cylinders are made from high-strength stainless steel and are extensively fluted to reduce their profile and weight. Ruger’s website states the cylinders are refinished with a durable, black Physical Vapor Deposition (PVD). But Ruger’s technical support told me, “We actually use a carbon based Diamond-Like-Coating (DLC), which is similar to PVD but has some subtle differences in application and mechanics. The hardness is around 3,000 Vickers, which is roughly equivalent to a high 80s HRC.”

For comparison, hard chrome plating, recognized as a very hard coating for guns, runs about 65-69 HRC. That means the DLC is very durable, indeed. The stainless steel frames get the same coating. The aluminum frames are finished with a synergistic hard-coat.

The barrel is a two-piece affair. The monolithic frame serves as a sleeve for the 1.87-inch stainless steel barrel insert.

The LCR is double-action-only with no exposed hammer to snag on clothing during presentation (Ruger’s LCRx models have an exposed hammer for optional single-action firing). The hammer and trigger are housed within the polymer portion and feature a friction-reducing cam that gives the gun a surprisingly light and smooth, non-stacking trigger pull on a factory gun. You have to feel it to appreciate it.

I could not get a reliable measurement of the trigger pull weight because my RCBS trigger pull scale has a maximum weight of 8 pounds, but if the LCR’s trigger pull is much more than that, it has to be the lightest feeling 8-plus-pound trigger I’ve ever felt on a factory revolver.

The LCR has a transfer bar safety system to ensure that the hammer blow can only transfer to the firing pin when the trigger is pulled all the way to the rear. The ramped and serrated front sight sports a highly visible long white stripe. It is pinned and replaceable. The rear sight is a square notch cut into the frame. The sight radius is 3.55 inches. The gun features a Hogue Tamer rubber grip that incorporates a very soft insert at the web of the hand to take the bite out of recoil. The cylinder release button (crane latch) has a heavy spring and requires some force to unlatch the cylinder. This is good for a concealed carry revolver because it is less likely to be accidentally activated from bumping something during concealment or when drawn.

One of the most appealing things about this gun is that it is chambered in .327 Federal Magnum. This cartridge was introduced in 2008 in a Ruger SP101 with a 3.1-inch barrel. Charter Arms, Taurus, Smith & Wesson, Freedom Arms and U.S. Fire Arms (now defunct) also chambered revolvers in this cartridge. Only Ruger and Freedom Arms catalog this caliber at present. Ruger currently has five pistols chambered for this round: three Single Seven models of 4.62-, 5.5- and 7.5-inch barrel lengths, an SP101 with a 4.2-inch barrel, and the LCR. The LCR version was introduced in 2015. The semi-rimmed .32 Automatic will also fit and fire in the .327 Federal Magnum chamber, but it isn’t recommended. The .32 Automatic has a thinner rim thickness than the revolver cartridges, which means that the primer is effectively about 0.010 inches farther away from the firing pin than the revolver rounds. This means that some .32 Automatic rounds could misfire due to less robust firing pin strikes. This extra distance also translates into excessive headspace, which can affect accuracy.

Another reason to avoid shooting the .32 Automatic in these guns is because its semi-rim is not as wide as the revolver cartridge rim and might not be engaged by the ejector. I fired some .32 Automatic rounds from the LCR, and when I pressed the ejector rod, the ejector completely missed the rims. I had to push the cases out one-by-one with a pencil. Accuracy with this round was horrible. I stopped shooting them after a few rounds. The pattern was so spread out that I was afraid a stray bullet might hit my chronograph. 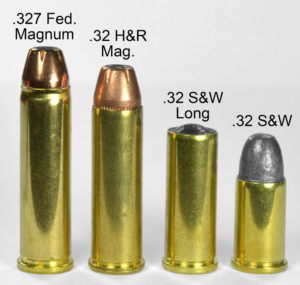 There is a nice range of bullet styles available for the .327 Federal Magnum. This includes hollow point, soft point and cast lead bullets. Ammunition manufacturers include Federal, Speer, Buffalo Bore, DoubleTap, Reed’s Ammunition and Jamison Ammunition. If you include the other calibers this gun will fire, the types of bullets available and the list of manufacturers increases significantly.

Accuracy with this small revolver was excellent. Most of the six-shot groups hovered around the 2-inch range. The smallest group was 1.53 inches and the largest group was 2.97 inches. That’s quite good for a gun with such a short sight radius. I used a six o’clock hold, and the hits were level with the sights and about 1 inch to the right. This little gun puts the rounds on target!

One concern with small guns is how much velocity you lose because of the short barrel. You can’t avoid the velocity reduction, that’s just physics. But the .327 Federal Magnum still produces high velocities from the LCR’s short barrel. The faster rounds produced velocities around 1,300 fps. The Federal 100-grain soft point clocked at 1,313 fps from the 1.87-inch barrel, producing 383 ft.-lbs. of muzzle energy. That’s more energy than a .45 Automatic produces with a 230-grain bullet at 850 fps (367 ft.-lbs.) from a 5-inch barrel. The DoubleTap load with the 115-grain cast bullet produced 1,264 fps and 408 ft.-lbs. of muzzle energy. This is awfully close to the power of a .357 Magnum when it launches a 125-grain bullet at 1,250 fps from a 2-inch barrel producing 434 ft.-lbs. of energy. Not all .327 Federal Magnum ammunition is loaded to maximum power, as the data in the table demonstrates, so shooters can select the round they feel will best suit their needs at the power/recoil level they desire.

The .32 H&R Magnum is generally comparable to the power of the .38 Special and is a viable choice when looking for a round with less recoil. They also come in a range of power levels, which includes a +P offering from Buffalo Bore. That company’s .32 H&R Magnum +P load was nearly as powerful as their .327 Federal Magnum load with the same bullet, being only 44 fps slower in the LCR.

The fact that you can shoot lower-powered rounds like the .32 H&R Magnum, .32 Smith & Wesson Long and .32 Smith & Wesson gives you so many options for different power levels. The LCR, in this chambering, is the king of versatility.

The full-powered .327 Federal Magnum rounds produce significant recoil in this lightweight gun. That’s to be expected, but the Hogue Tamer grip made it tolerable. This gun is infinitely more comfortable to shoot than my Smith & Wesson 340PD, which painfully stings my hand with full house .357 Magnum loads. The 340PD is 5.6 ounces lighter than the LCR, and the .357 Magnum produces more recoil. I wish Hogue made a Tamer grip for Smith & Wesson J-Frames!

I really like the Ruger LCR combined with the .327 Federal Magnum cartridge. The gun is concealable, reasonably lightweight, accurate and points naturally. It has plenty of power, and there is a broad selection of ammunition. It has less recoil than the .357 Magnum and offers an extra round capacity. It is an excellent choice for a concealed carry belly gun. 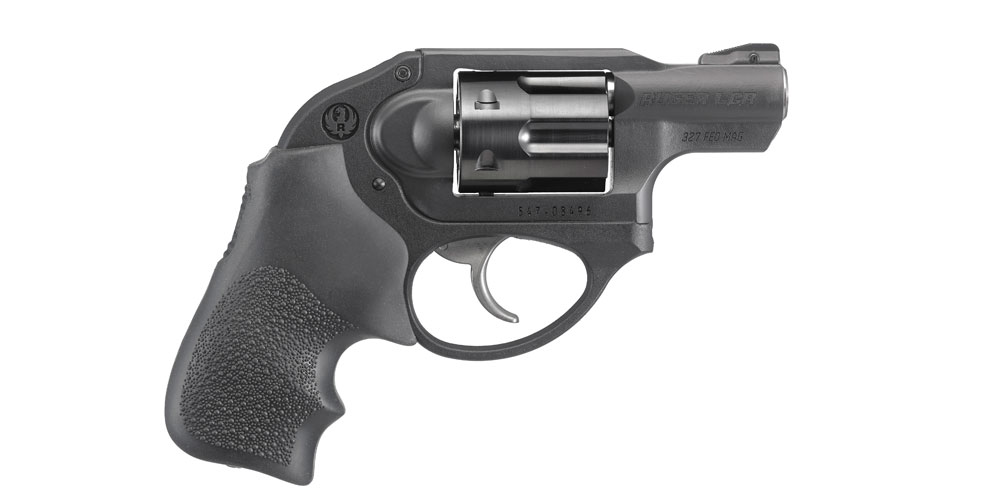