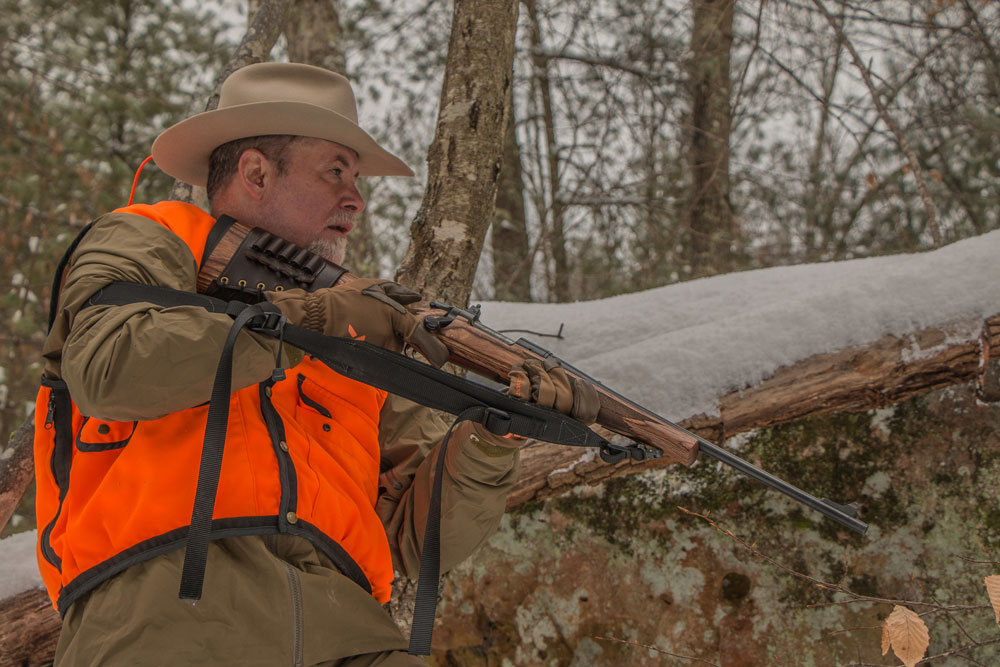 In 1983 Remington introduced the Model Seven. Best described as a compressed model 700, it was sort of a replacement for their discontinued model 600. It had a suggested price of $449.95, and at just a shade more than 6 pounds and less than a meter in length, riflemen immediately adored it. I always thought the LS version with the laminated stock and fixed sights was the best of the bunch. It was discontinued in 2005.

For 2016 Remington revived the model Seven LS. It’s the first Seven in a long time with the short 18.5-inch barrel and iron sights. I ordered one immediately and haven’t put it down since. This is partly because I lusted after a model Seven in 1983 – the year I graduated high school – and partly because this rifle has satisfied my craving for a model 600, like Jeff Cooper built his first scout rifle on.

I did not intend to mount a scout scope on this rifle; I wanted to build it with rugged iron sights, making it a general-purpose rifle like the 600 Cooper carried to South America. However, I could not resist installing a traditional riflescope to see how well it would shoot. So, I ordered a set of Talley steel rings and the company’s one-piece base and mounted a Leupold 1-4x VX2. This upped the weight to 7 pounds, 3 ounces. Before any shots were fired, I addressed the only real issue I had with the rifle. The factory trigger broke crisp but at a shade more than 6 pounds. A rifleman’s rifle should never have a trigger pull weight of more than half the rifle weight. I ordered the best replacement trigger I could find, a Calvin Elite from Timney Triggers, and had it set for 2.5 pounds at the factory. (When Timney owner John Vehr asked Calvin Motley – his lead engineer – to build the best trigger he could, Vehr was so impressed with it, he named it after the man who created it.) I installed the Timney in about 15 minutes. I was not disappointed. Six loads, firing three, three-shot groups, were tested from a bench at 100 yards. The average group size was 1.67 inches. Fortunately for me, the standout load was Hornady’s new Custom Lite 125-grain SST load. It averaged 1.03 inches, was very comfortable to shoot, and is totally deer or bear capable at any range I can shoot accurately with iron sights.

My intent all along had been to install an XS aperture rear sight and the company’s white-striped post front. But before I went there, thinking having the option to mount a scope might be a good thing, I ordered a Talley Back-Up Peep Sight. This sight installs directly on the Talley base, all you have to do is file down the rear lug. The result is a back-up sight option that can be installed in seconds, without loss of zero. Then, I turned my attention to the front sight. In the past, it’s been possible to drive the bead out from the dovetail in Remington sights but new Remington front sights are one-piece units. Additionally, instead of using two screws, they’re attached with one screw and a stud that’s molded into the sight base. The XS sight kit for the model Seven comes with only a dovetailed post front sight. I had to order a front base from XS. This worked but I had to shorten the screws provided with it. XS Sights is revamping their model Seven sights to work with the newer rifles.

With the front base and sight installed, I tried out the Talley Back Up Peep sight. Because this sight is mounted a tad higher than the XS rear sight – which is designed to work with the XS front sight – the point of impact was off. To make this sight work I would’ve needed a front sight 0.20 inch taller. In the end, I decided to go with the XS rear aperture sight and forget about the scope. I have plenty of lightweight scoped rifles anyway.

With the XS Sights, my bench accuracy did not suffer all that much. In fact, I managed to shoot some groups just as small as those I shot with the scope. Surprisingly, with a tight sling from the seated position at 100 yards, I shot more than one group measuring less than 1.5 MOA.

The rifle proved to be a jewel from field positions. I could repeatedly drop into the prone position and hit a 6-inch target at 100 yards in about 10 seconds. The action was amazingly smooth and reliable; it was as good as any Remington action I’ve worked, and it was no problem to hit a 6-inch circle at 25 yards three times in about 6 seconds. With the XS Sights and the Galco Gunleather RifleMann sling, the rifle weighs 6.63 pounds. To round out the setup, I installed Galco Gunleather’s leather Butt Cuff. With five cartridges inserted, it ups the weight to 7.25 pounds. The idea with the butt cuff was not to provide a means to carry extra ammo, but to serve as storage for the field load of five rounds, four in the magazine and one in the chamber. This way the rifle can be stored or hauled unloaded with a full compliment of ammo on board. After a lifetime of lusting for a Remington model 600 and 33 years of yearning for a Remington model Seven, I finally have mine. In 1983 the median household income in the U.S. was $19,000 and a model Seven was 0.023 percent of that. Today, with a median household income of $53,000, the model Seven is a tad more affordable at 0.020 percent. I can’t argue with the price and, I think I ‘ve configured this rifle perfectly for general-purpose use.

You might prefer yours with a riflescope and the Back Up Talley Peep. I take no issue with that, but I’m going for the – Jeff Cooper in South America – old school version.