The Wilson Combat Tactical Carry masterfully blends artistry with functionality in a pistol you can trust your life with.

After signing up to take my second 250 Pistol Class at Gunsite Academy, I contacted Bill Wilson with Wilson Combat to ask if he had a pistol I could borrow. Why? During my first 250 Pistol Class, I watched half of the students struggle with either poorly constructed pistols or pistols that broke. I knew the quality of my training would be partially dependent on the performance of my pistol. Bill said he had just the gun for me, the new Wilson Combat Tactical Carry in 9mm Luger.

But 1911s in 9mm have a reputation for being less than reliable. In fact, during the first day of the class one of the instructors indicated he was “concerned” my 9mm 1911 would be problematic. (He might not have noticed it was built by Wilson Combat.)

A pistol is by nature a defensive weapon. True, they are used for sport shooting and hunting, but at its very core it’s a life saving tool. Since we’re not talking about implements intended to appease the hobbyist, the performance of a pistol cannot be compromised. It must be as unfailingly reliable and accurate as math. There is no wiggle room; a defensive handgun must work. During Gunsite Academy’s 250 Pistol Class, specifically the Crimson Trace laser-integrated version, which includes an additional night shoot, you’ll fire more than 1,000 rounds. You won’t have time to field strip and clean your handgun unless you want to sacrifice training opportunity. If your gun continually hiccups or breaks, you lose out. Just like you’d lose out if it did the same thing while a meth head was whacking you with a claw hammer.

A quality defensive handgun course does several important things. It allows you to establish a basic foundation for continued training, and it vets your weapon and related gear.

Most of the gun reviews that populate the firearms periodicals are built around the informal and limited, one or two-day evaluation. But this article is different. It’s not about a $500 polymer fun gun; it’s about a $3,750, exquisitely crafted mechanical piece of art built from steel.

If I’m going to tell you that you need a pistol that costs as much as a used pickup truck, I best be basing that advice on an assessment steeped in real word practicality. So, lets get the particulars out of the way first. During the class I fired 1,217 rounds out of the Wilson Combat Tactical Carry pistol. I had three failures to feed. The first was the first shot I fired with my strong hand only, and I suspected I limp-wristed the pistol because that was the last of it. I had two other failures to feed when firing the 67 rounds of low-recoiling frangible ammunition that’s mandated for use in the simulators.

For what its worth, stoppages with the frangible ammo are common with every platform and, in truth, their clearance adds to the training value of the course. That said, there’s another reason I suspect these stoppages occurred; I’ll get to that shortly. I imagine some will be taking my name in vain when I admit that I did not shoot this pistol from a bench rest to determine its accuracy potential. After all, is that not the way all firearms reviews are conducted? Well, yes it is. But let me go on record now by saying that bench rest testing a fighting handgun makes about as much sense as peeing on an electric fence.

I have yet to find a modern defensive handgun that did not deliver adequate accuracy. More importantly, as it relates to the Wilson Combat Tactical Carry, when I received the pistol I put two magazines of Nosler Defense 9mm +P load into one ragged hole at 10 yards from the standing, off-hand position. What else do you need to know?

Well, you might want to know that on the school drill for the class I fired a score of 47 out of 50. I had one round outside the 8-inch center circle. It was my fault; I rushed the second round from 10 yards.

On the EL-Prez Drill, which is kind of the bar used to establish basic defensive shooting proficiency at Gunsite, I scored a 70 out of a possible 60, by getting all my hits in two seconds less than the 10-second par time. Like every Wilson Combat pistol I ‘ve ever fired, the Tactical Carry will shoot better than I can. If you can shoot better than this pistol, I’ll eat my hat. The Tactical Carry is a full-size, steel-framed 1911 chambered for the 9mm Luger, .38 Super, or .45 ACP. It has an empty weight of 37.5 ounces and it (the pistol, not you) is guaranteed to shoot groups smaller than an inch at 25 yards. Bill Wilson designed the Tactical Carry as a next generation full-size custom pistol.

The full-size steel frame is fitted with a round butt, one-piece magwell, and it comes with many of Wilson Combat’s popular performance and cosmetic options – options like, carry cuts, ball end mill slide cuts, a serrated top and rear of slide, and a countersunk slide stop post. The reduced profile concealment grip safety and hammer in conjunction with round butt magwell round out the basic package.

In detail, there’s more. The front strap and main spring housing are checkered at 30 lines per inch and the pistol is fitted with a Tactical thumb safety and G10 Starburst grips, with Torx head screws. The trigger was wiggle and rattle free, and it broke as crisp and clean as a politician’s promise at 3.25 pounds.

The slide is carbon steel with a heavy machine chamfering on the bottom edges. The 5-inch, stainless, match grade barrel has a flush cut, reverse crown and the chamber is fluted. Standard sights are the Wilson Combat Battlesight with a green fiber optic front. This pistol is free of sharp edges, and that is something you’ll appreciate if you’re going to carry it and shoot it a lot. It also had fine enough checkering that it did not eat skin, but was still coarse enough to provide a solid purchase.

There were none of those silly forward grasping grooves on the slide; your hand has no business being that close to the muzzle of a pistol. And, I could field strip the pistol without the aid of the bushing wrench that was supplied with the very nice soft carry case the pistol came in.

What I really liked were the sights. I’ve been a fan of XS Sights’ Big Dot Sights for a long time. In fact, every defensive pistol I own is fitted with them. However, I found the Wilson Combat Battlesight, with its wide U notch, combined with the green fiber optic front sight, to be their equal.

They were a perfect partner to the Crimson Trace green laser grips. When I saw green on target – fiber optic or laser – I pulled the trigger. I have a big thumb and the narrow, Tactical safety was a bit trim for me to ride my thumb on while shooting. This caused me to press my thumb against the slide in order to keep it on top of the safety where it should be. In fact, I’m convinced that my proclivity to ride the safety so tight, with sometimes pressure on the slide, is what contributed to all three of the failure to feed stoppages I experienced. I’d rather have a standard width extended safety.

I removed the Starburst grips that came on the pistol. Not because I did not like them but because my defensive handguns all have lasers on them.

I’ll not go into all the positive reasons for that here. If you want to fully comprehend the necessity and use of lasers, I suggest you pick up a copy of my book, Handgun Training for Personal Protection. 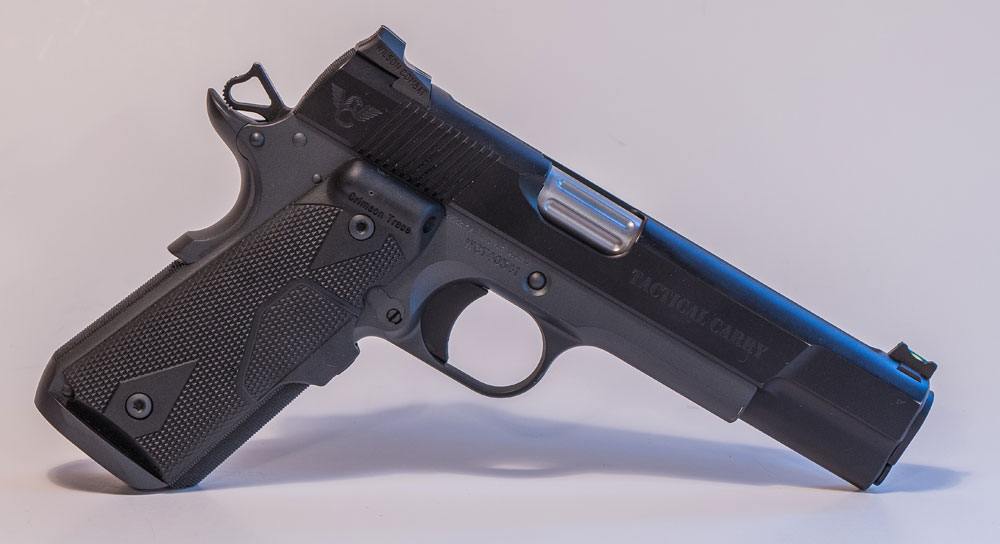 Why Should I Buy One?

The 21st century trend with defensive handguns is pistols you can purchase for less than a paycheck. That’s fine, as long as you do not plan to shoot your pistol a lot, or trust the only life you have to it.

For me, a defensive handgun is not a weekend toy simply for fun at the range, valuable as those types of guns are. I’d not buy a Wilson Combat pistol so I could brag to buddies about how much money I spent. I’d buy one so that when the elephant steps into the room, I‘ll know I’m equipped to sort out the problem.

Someday, you’ll want to hand the pistol you have shot thousands of times and trusted your life to down to you son or daughter. With a Wilson Combat Tactical Carry, they’ll be able to do the same thing one day. And, they will know that Daddy knew something about pistols and did not skimp on the things that really mattered.