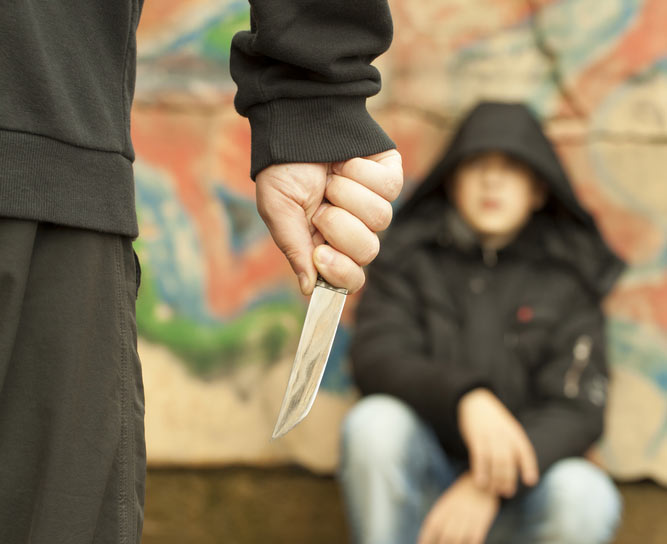 The presence of more than one assailant is common in criminal assaults. Swarms of assailants are more likely than they were a few years ago, and it is a good self-defense strategy to avoid pockets of able-bodied young men who appear capable of delivering harm.

The classic criminal assault with a second assailant, though, is usually a pincer movement conducted from the blind spot. To put this in perspective let’s re-address the encroachment problem. More than likely there’s a verbal component from the predator and the objective is to get the citizen engaged in dialogue. While engaged in dialogue, the likely approach is from behind by the second adversary. This is a difficult problem to manage and requires a significant adaptation to how one normally reacts to forward encroachment.

Even if one is aware of the potential that a second party may be coming from behind, the cost of looking may very well be the window that the initial adversary uses to throw a punch or draw a gun. So how do we maintain awareness and vigilance to a known potential problem and scan the area behind us for the most likely avenue of approach for a second adversary without making the job of the initial encroacher easier?

The key element here is movement, and the natural reaction to wanting distance and space – which is moving backwards – must change and adapt. Backwards movement is expected by any bad guy and it’s quite easy to “steer” the uninitiated pretty much anywhere, once this basic reaction is understood.

One recommendation is to “arc” around the adversary and not move backwards. A good way of visualizing this is if one were to place themselves on the face of a clock with the predator standing at twelve o’clock and the citizen standing at 6 o’clock, the objective would be to try to cut a perfect arc up to either the 9 o’clock or the 3 o’clock position.

This is not a natural or instinctive thing to do. In fact, it’s quite counter-intuitive, as are many of the best practices in self-defense. It’s also not intuitive to look at the tiny metal post at the end of the reciprocating slide in an exchange of fire, but it is most assuredly the best practice to guarantee that the bullet goes where desired.

Arcing up to the three o’clock and nine o’clock positions provides two significant advantages in managing unseen space to the rear. First, by following the arc, we can literally maintain our primary field of vision with the known problem in front of us while simultaneously pulling what was behind us into our peripheral vision. This is significant because now we don’t lose the primary problem by “checking our six.”

The second advantage of this movement tactic is that, if indeed there is a second adversary, then what the good guy has done is remove him/her self from a 180-degree pincer problem and significantly narrowed the field of threat. Much has been written about dealing with multiple assailants, and one of the few successful tactics is lining them up as much as possible. The arcing movement does this not perfectly, but it does remove us from the unmanageable 180-degree problem and begin this process of “stacking” multiple assailants.

One more real benefit of the arcing movement goes well towards de-selecting us from a criminal selection process. The arcing movement is so out of pattern from average that, often, the reports back from those who have actually used this tactic are that the encroaching party gives the good guy an odd look and walks off mumbling. So, movement is a key element in managing a second adversary, which is common within the criminal assault paradigm.

Editor's Note: This article is an excerpt from Straight Talk on Armed Defense.