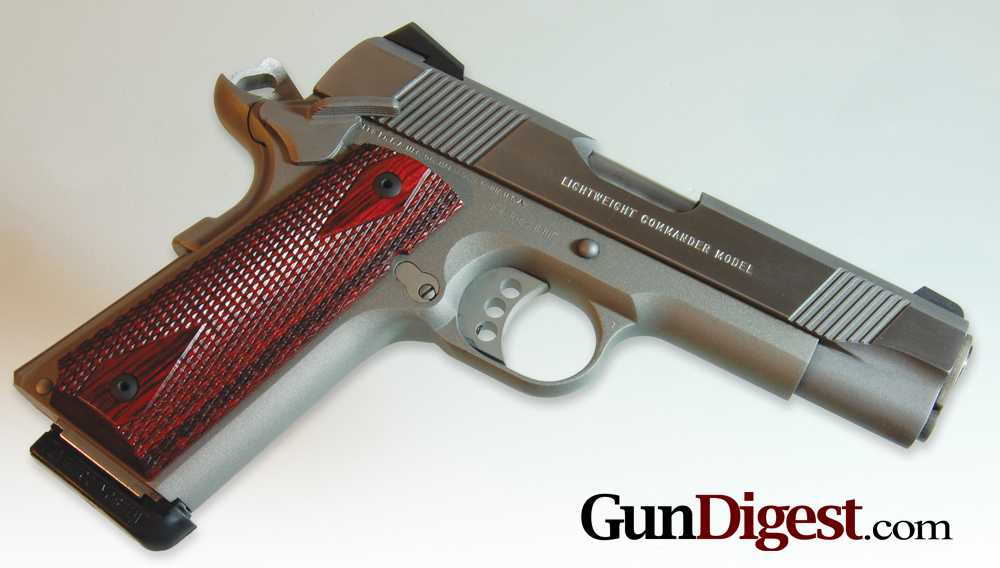 In this Gun Digest handgun review, Mark Kakkuri looks at the Colt Lightweight Commander – a classic, capable and concealable 1911.

Very few guns have a century-long legacy like the 1911. It has served U.S. Armed Forces for decades and been labeled as one of the finest fighting handguns in the world. Whereas dozens of manufacturers have taken on John Moses Browning’s design and continue to produce more 1911s than ever, arguably the 1911 design most often referred to is a variant of the original by Colt.

Firearms enthusiasts of every stripe have written and read thousands of articles about the Colt 1911. For most, it’s a love/hate thing with passionate rhetoric usually reserved for discussions on religion and politics. Moreover, gun reviews by their very nature can be quite subjective: after all, what you shoot best may not be what another person shoots best.

This is true of the Colt 1911 and every other handgun ever tested and written up in a gun magazine. In my handgun review of a modern Colt Lightweight Commander I want first to admit – gladly – biases and subjectivity. I am one reviewer with one opinion. Second, in the interest of full disclosure, I’ll admit that I like the 1911 platform—there is sheer genius in some of the design elements. But I also like snub-nosed revolvers. Few handguns fit my hand better than a CZ. And I like Glocks. Biases accounted for, let’s get down to business.

The bottom line on the Colt Lightweight Commander is that the gun is all business and that can be both a strength and a weakness. Suitable for plinking on the range, racing in competition, and carrying concealed in daily life, the Lightweight Commander aptly does all these things – that’s its strength. Its weakness is that it functions well but not with the finesse of other pistols.

I can already hear the objections: finesse, you say, is for ballerinas or cake decorators. The Colt 1911 is a last-ditch defensive tool, a combat handgun that fires the burly .45 ACP cartridge. It’s what my Grandpa carried in World War II. Agreed. While few other handguns share the legacy of service of the Colt 1911, other handguns outshine the Colt Lightweight Commander in terms of weight (lighter), feel (smoother), or deployment (simpler).

Other factors such as magazine capacity and price are also important but I’m not going to factor those in here. Where the Colt shines, however, is in its overall execution. In other words, being “all business” means it is extremely effective at doing what it is designed to do: accurately discharging .45 ACP bullets at a target.

1911 aficionados, me included, can and will argue the many merits of the platform: legacy, ballistics, specific design features, and more. Some may even argue that the notion of finesse does not belong in the matter of defensive arms. That’s a discussion for another day. For now, I’m going to try to capture the four main reasons the 1911 is best described as “all business.” 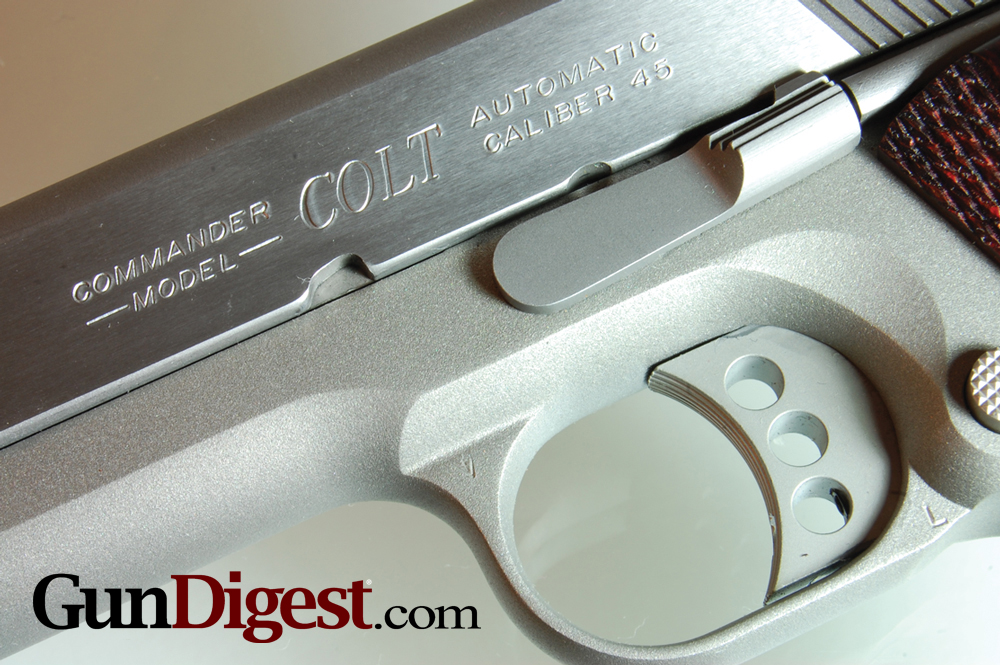 The Four C’s of an All-Business Pistol: Classic

The stocks provide excellent purchase and, in their 118-degree angle, offer natural pointability. The grip safety allows a shooter to safely hold the Colt in the web of the hand, maintain a solid grip, and in conjunction with the stocks, quickly bring the muzzle back on target when shooting. Other pistols offer better ergonomics or stocks with greater purchase. Other pistols allow a barrel to sit lower in the hand. Very few pistols; however, combine all of these functional elements like a 1911. These elements have changed very little. Generally firearms only become classics if they prove themselves to be capable. The Colt Lightweight Commander is indeed a capable shooter, meaning it is easy and intuitive to aim and squeeze the trigger. It accurately delivers .45 ACP bullets to point of aim, without fuss. Yes, with a 1911 you have to master squeezing a grip safety, disengaging a manual safety, and squeezing a single-action trigger. Mastery of these and other elements demands practice, practice, practice.

Of course, safe, regular, consistent practice provides the means to mastering any handgun, not just 1911’s. But once a 1911 shooter masters these movements, the act of safely aiming and accurately firing becomes second nature. Some firearms experts recommend double-action revolvers or double-action-only semiautomatic pistols for new shooters or for those who cannot put in the practice required to master the more complex action of a 1911.

“Simpler” handguns may indeed be “easier” to fire as they may have no manual safety and may offer a long, smooth trigger stroke. All firearm safety and engagement rules accounted for, if a shooter is at the point of squeezing a trigger to fire a handgun, it is hard to beat the easy, short, glass rod snap of a 1911 trigger.

That’s because thin and flat is actually easier to hide than small and chunky. Granted, other handguns exist that are thinner and flatter than the 1911. At some point, however, too much reduction in size negatively affects a pistol’s capability. In other words, if you can’t shoot a small pistol well, then what’s the point of carrying it concealed for self-protection? The Colt Lightweight Commander weighs in at 27 ounces (unloaded) but its excellent concealability is more a function of its thin and flat design. 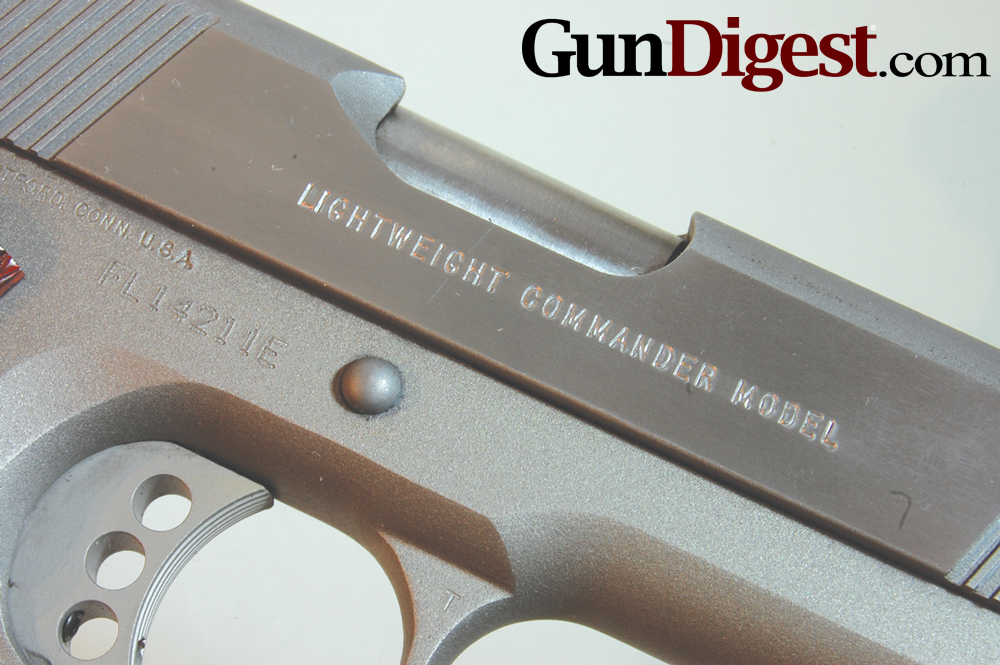 This Colt Lightweight Commander bears the Colt logo: a young horse rearing. It’s a fitting image as this 1911 is indeed powerful and sometimes tough to control. Even with all its excellent design features working in conjunction, this pony still gives a healthy kick in the form of recoil.

It’s not outrageous or obnoxious, but it is commanding in two respects: First, you’re firing the mighty .45 ACP cartridge, one of the most effective defensive rounds in handgun history that delivers a wallop of energy to a target. Second, you’re firing the mighty .45 ACP cartridge, a round that packs a wallop of recoil for the shooter. With the Colt Lightweight Commander, one of the lightest in Colt’s 1911 lineup, whatever recoil the gun cannot absorb will be transferred to the shooter.

Add the loud report, muzzle rise, and the psychological effects of firing this gun and you’ll see why regular practice is a must. Other handguns, due to their designs, are downright easy to shoot. Or at least they are less punishing than this 1911. As such, you won’t be breaking in the Colt; the Colt will be breaking you in.