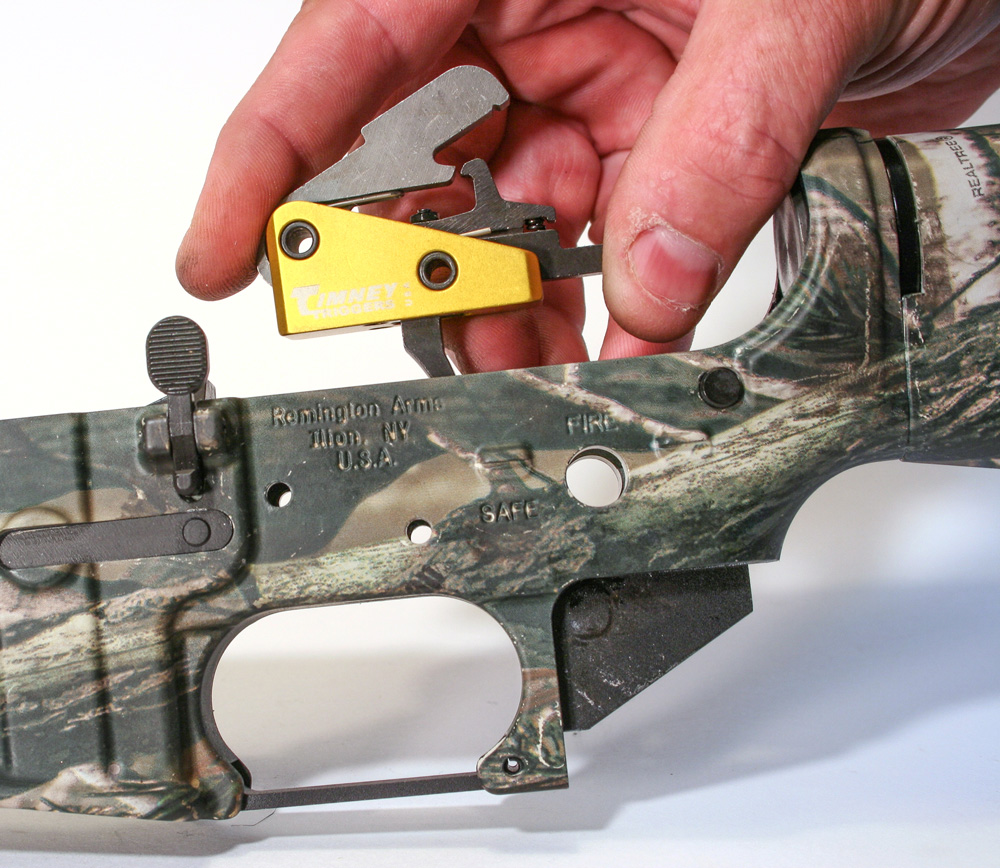 It’s no secret that the Mil-Spec AR trigger is terrible. It has everything a good trigger does not have, like take-up, creep, over-travel, and inconsistency.

Because of this, a number of manufacturers offer aftermarket triggers for the AR-15 and the AR-10. (As a side note, triggers for the AR-10 and AR-15 are different and are, therefore, not interchangeable.) I could recommend most any of these triggers, but, more importantly, let me explain to you what a good trigger actually is.

When we are born, we enter a life of buttons and switches, those many things that must be pulled, pushed, or flipped in order for us to get what we want. From a metaphorical standpoint, we push these buttons and pull these strings of life in many ways. From turning on the radio in our car to the subtle looks we give our significant others, we are flipping switches.

It is no different when we shoot. To make our rifles fire, we must pull the trigger. However, when compared to the other buttons we physically manipulate, pulling a trigger is more akin to that wink you give to get a kiss. Pulling a trigger is a much more subtle exercise than jabbing at a light switch or poking the TV remote. When you pull a trigger you have—hopefully—ended your hunt, stopped a threat, or hit dead center of your target. Pulling a trigger might be one of the ultimate exercises in hand/eye coordination.

What we simply cannot do is shoot a rifle with precision, if it has a bad trigger. The really sad thing is that most shooters do not know what a good trigger really is—and just because a rifle is expensive doesn’t mean it has a good trigger. I test dozens of ARs every year and have done so for a long time. The percentage of those rifles that come with a good trigger is less than 10.

A trigger is a moving mechanism, and there are several terms used to describe how it moves. It’s important to understand both the movement and the terms, so you can evaluate a trigger and better understand how to pull one. Following are the common terms used to describe trigger function. Let’s define each separately and examine how their function can negatively or positively impact your shooting. Take-up describes the initial movement of a trigger before resistance is met. There are two types of triggers, single-stage and two-stage. Both can have take-up, but, with a two-stage trigger, you’ll feel some resistance, which can be as much as half the overall pull weight, during take-up. Take-up with a single-stage trigger is generally very light and is completed over an infinitesimal distance. In other words, a good single-stage trigger has no take-up; you put your finger on it, apply pressure, and the rifle goes bang.

Pull weight describes the amount of pressure that must be applied to a trigger to release the sear. Pull weight can vary a great deal, and shooters often argue about what an ideal pull weight should be. Here again we are talking about feel, so opinions are subjective.

A good place to start is with a pull weight that is no more than half the weight of the rifle itself. The reason for this should be obvious. If you have pressure to the trigger that equals or exceeds the rifle’s weight, how are you supposed to keep your sights on target without moving the rifle?

Creep describes the movement of a trigger after take-up but prior to sear release. Creep is very common in factory triggers. Know that you can have a trigger with very minimal creep and still shoot with precision as long as the creep is smooth and consistent. It is in experiencing trigger creep that you will often feel roughness and inconsistency. This is due to the wide tolerances found in the mass-produced and inexpensive parts that make up many factory trigger mechanisms.

The importance of over-travel is probably the most misunderstood aspect of a trigger. Over-travel relates to the movement of the trigger after the sear has been released. Very few triggers have no over-travel, but a good trigger will have very little or an almost imperceivable amount.

Why is over-travel so important? As hard as it may seem to believe—considering that bullets leave rifle barrels sometimes in excess of 3,000 fps—the movement of your finger on the trigger after the sear has been released can move the rifle before the bullet exists the barrel. The flight time of most bullets through a rifle barrel is between 1.0 and 1.5 milliseconds.

The “lock time,” the time between sear release and primer ignition, can be five times that long. Any movement to the rifle prior to the bullet exiting the barrel will affect your point of impact and excessive over-travel will cause this movement. Due to the higher force imparted on the trigger when it stops, a heavy pull weight will exaggerate the effects of over-travel. In essence, what you’re doing when you pull a trigger with excessive over-travel is inducing movement to your launch platform. It’s kind of like you’re trying to throw a curve ball.

Consistency is probably the most important aspect of any trigger, regardless its pull weight, creep, take-up, or over-travel. This consistency is why companies like Timney Triggers are in business.

Now, with some understanding of what a good trigger should feel like, you can start experimenting with triggers to see which ones pull in a manner that pleases you and will lead to good shooting. Triggers are relatively easy to install on an AR, and most installations can be accomplished in about 15 minutes.

This article is an excerpt from the Gun Digest Shooter's Guide to the AR-15.