A relatively simple accessory, a suppressor cover goes a long way to shooting more accurately with a can, while protecting the muzzle device. Find out the top choices.

What Are The Best Suppressor Cover Options:

After dropping a few hundred dollars on a suppressor, a couple hundred more on a tax stamp, filling out a mountain of paperwork and waiting months for it to get processed, you finally get your can. Alleluia, pass the ammo! You're now free to shoot away in quieter and more accuracy bliss. Almost.

True enough, as long as you have a suppressor and a rifle properly threaded to accept it, you’re set for reduced-decibel marksmanship. Though, if you’re serious and dedicated to the popular muzzle device you’ll most likely find out you need one more piece of gear to complete your kit—a suppressor cover.

I hear some of you out there: What exactly? And why?

Yup, outside of dyed-in-the-wool suppressor aficionados ‘can wrap’ is a bit of mystery or bordering on frivolous. Yet, get to popping away without one and you’ll wish you’d investigated the accessory sooner. They’re not there for looks, suppressor covers are vital to safe and effective shooting with the noise reduction device.

Why A Suppressor Cover

You needn’t have a suppressor to understand the need for a suppressor cover. To illustrate I’ll pose a simple question: What happens to your barrel after a few shots? If you brushed up against it after a string, you know that bugger gets hot Depending on its profile and its caliber, scalding in many cases. And that’s a relatively thick tube of metal, even with a sporter profile and especially measured against a suppressor tube (or baffles, if it’s tubeless). Aluminum, stainless steel or titanium, cans heat up and quickly, causing a couple of major issues.

First off, hot suppressors are an outright menace to your person. Not an issue if you’re the type of shooter who never takes his or her rifle off the bench. But if you’re more dynamic behind the trigger you and those around you run a chance of receiving a blistering kiss. Like motorcycle and dirt bike enthusiasts, legs are particularly susceptible to getting burned. Uncomfortable as singed flesh might sound, there’s a more undesirable outcome to a suppressor hovering around blow-touch temperatures—accuracy deterioration. No, it has nothing to do with barrel harmonics or any finite issue you generally deal with when a gun runs hot. Its heat mirage, and plenty of it. Downrange, the thermal phenomenon is downright handy—allowing you to read wind direction and magnitude; up close, it’s an entirely different story. Cooking off a can, heat mirage makes the image through a scope about as clear as the back of a cataract.

Finally, get a suppressor too hot by shooting too many rounds in too short a space of time you can damage your precious device. It’s a rarity, but not unheard of and less than desirable. They're not exactly cheap and, besides, who wants to go through the same song and dance to replace a damaged one.

When made correctly, with the proper material, a suppressor cover mitigates these issues. But you’ve got to know what you’re looking for, because not all wraps are equal.

What To Look For In A Suppressor Cover

The polar opposite to the device they enhance, suppressor covers are a simple affair—to evaluate and purchase. Uncomplicated as they are, they still have a little nuance worth considering so you get the right jacket for your can.

For the most part, suppressor covers consist of two parts: inner core and outer jacket. Each is important. The inner core is made of a fire-proof material, such as Nomex or Kevlar, that absorbs and dissipates heat. The jacket is generally a synthetic fabric that secures the core to the suppressor and, in some cases, provides camouflage for the device and further heat protection. There are some recent twists to this formula—such as MagPul’s coreless cover and the silicon grippable covers—but for the most part, a great deal of the market consists of the aforementioned configuration.

The important factors to consider when shopping for a suppressor cover are heat rating and fit. The latter first.

Suppressors come in all shapes and sizes, so there isn’t a one-size-fits-all cover. You’ll need to know the length and diameter of your can to get the right system, and you need to read how manufacturers measure their suppressor covers. There isn’t a lot of uniformity in this, so it’s worth your time to understand what dimensions are important.

As to the core, heat rating is what is important. Some of the extreme covers are rated for 3000-degrees Fahrenheit, which covers some pretty radical use. But before you go, That’s the one for me! you need to consider what such a model entails. Material and plenty of it. The short and the quick of it, that’s how suppressor covers operate, relying on core bulk for heat resistance. In turn, the higher the rating, generally the larger the cover and the more weight you’re attaching to your pistol or rifle.

For someone running hot on the range or the like, the extra weight might not be that big a deal and even an advantage. The more insulation potentially means longer strings. But if you’re moderate in fire volume and need to maintain your firearm’s balance, a lighter, thinner option might make more sense. A traditional jacket-core configuration, Burn Proof Gear’s suppressor cover is straightforward and effective. Available in three configurations, Heavy for rifles, Medium for pistols and rifles and Custom for anything not covered by the first two. Across the board, the base units—made of Nomex and Kevlar—handle up to 1000-degrees Fahrenheit of heat, which translated means a fairly large volume of fire in a short amount of time. You also have the option to beef any of them up to 2000-degree rating with an optional fiberglass insert. There are five cover color options to choose from as well
MSRP: $150-200 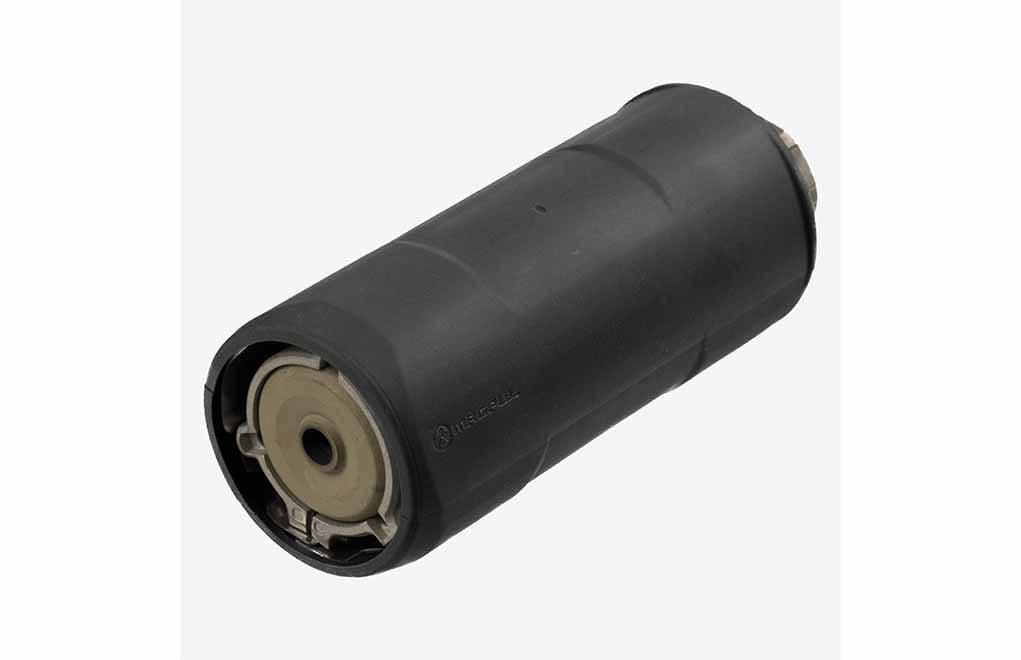 Arguably, Magpul’s offering is one of the most unique in this corner of the market. Consisting of a heat-resistant sleeve and a raised stainless steel heat shield, the unit keeps exterior temperatures up to 1000-degrees Fahrenheit cooler than the suppressor’s surface. It’s pretty ingenious in execution, clamping directly onto a can to provide ample airflow to cool the muzzle device. A bit heavy at 9.6 ounces, nonetheless, the suppressor cover is the ideal addition to any AR you happen to run suppressed.
MSRP: $100 If you’re searching for the most heat suppression with the least hassle, it’s difficult to do better than Cole-Tac’s High-Temperature Python (HTP). The suppressor cover uses a three-layer system, the inner tube rated for 3,000-degrees Fahrenheit, middle layer 1,800-degrees and Denier Cordura Nylon 600-degrees. Cole-Tac even uses Kevlar thread for stitching. What you get is an incredibly resilient system, perfect for maintaining your rifle's accuracy no matter how many rounds you put down range. The suppressor cover is also incredibly simple to use thanks to its highly intuitive Velcro locking system. The exact length and weight can vary because these covers are made-to-order, offering a lot of protection with little impact on your rifle or silencer regardless of what model you're using. When purchasing, users have a choice between 12 cover colors, 9 strap colors and 3 buckle colors, and they can also input their suppressor's exact dimensions to ensure a perfect fit.
MSRP: $95

Rifles Only HAD Suppressor Cover Rifles Only MAD cover is a strong option, but is outdone by the HAD for overall performance. The difference, a heat-abatement outer jacket that ups the overall performance of the suppressor cover system. The inner core is rated for 3,000-degrees Fahrenheit and the shell 2,500—that’s a lot of protection and all but eliminates any mirage. Rifles Only offers a wide selection of shells for the suppressor cover, letting you match your operational environment. The only drawback, its traditional lace-up system doesn’t make switching the fastest procedure known to man.
MSRP: $95 This system has been around for a spell and remains one of the top choices for mirage mitigation. One of the great features is Armageddon Gear makes the suppressor cover for more cans than perhaps any other company. Even if you can’t find yours in the chart, they’ll make a custom model if you send in your spec. However, this isn’t the choice for running your rifle (or pistol) suppressor red hot. Armageddon Gear had precision shooters in mind, thus it’s rating is a bit more pedestrian than some of the more extreme example—around 800-degrees Fahrenheit on its hi-temp model.
MSRP: $87 There’s more than one super simple silicon option out there, but Manta Defense offers a great option with some of the best features. Manta’s suppressor cover is ribbed, which helps increase surface area to disperse heat more efficiently while also being easy to grab. The one advantage or drawback, depending on what type of suppressor you run, it’s only sized for 1.5-inch diameter cans. Basically, you get a 7-inch suppressor cover you carve down to length. Great if you have a can that fits those dimensions, but it leaves everyone else out in the cold.
MSRP: $78