Arrowhead Tactical Apparel makes carry-friendly athletic clothing. We strapped on our heaviest guns and put their Carrier Sweatpants and shorts to the test.

We all know that the first rule of a gunfight is to bring a gun. But when it comes down to it people often leave their protection at home. Sometimes this is for valid, legal reasons such as traveling by plane. Often it’s done merely out of convenience. Lounging at home on the weekend but need to run to the store for a minute? Who wants to put on jeans, a belt and their holster for a five-minute errand? Heading to the gym or for a run around the neighborhood? Well, the clothing required for that obviously inhibits one’s ability to stay armed. For those who only own normal athletic-style clothing, examples like these may sound all too familiar, but companies like Arrowhead Tactical Apparel are here to change that.

The company’s line of athletic shorts and pants feature an innovative internal belt system, allowing comfort while staying armed. A novel concept like this needs to be put to the test, so we had Arrowhead send over a pair of their Carrier Sweatpants and shorts and started wearing them to the gym, on the trail and at home all while packing the heaviest heat possible. Upon receiving the carrier sweatpants and shorts, the first thing I noticed was the quality of the material used. While the internal belt system is at the heart of the Arrowhead Tactical Apparel concept, the company didn’t cut corners anywhere else. Both the Carrier Sweatpants and Carrier Shorts are made from the same cotton/polyester blend that feels heavy, yet breathable. The clothes feel comfortable when worn and show no signs of early wear or fraying. I also appreciated that the subdued company logo and the general design of the clothing, looking much more like generic athleticwear rather than tactical gear. As for their fit, I’m about 5’11 and 160 pounds and the medium sizes of both the Carrier Shorts and Carrier Sweatpants fit me perfectly.

The clothing arrives without the belt installed, so some assembly is required before one can use it for concealed carry. The process is self-explanatory, and I managed to intuitively set up my Carrier Shorts with some trial and error. For my Carrier Sweatpants, however, I followed the video guide that Arrowhead posted on its website, and using the company's method made it go much smoother. It’s not rocket science, but I recommend following the guide for anyone who ends up getting a pair.

Both the Carrier Sweatpants and shorts are essentially normal pieces of athletic gear with one new feature—internal belt loops. Designed is used in conjunction with a retention belt included with the clothing, but is capable of accepting similarly styled belts as well. The belt is threaded through the loops inside of the waistband to provide increased support and somewhere to attach a holster. The included belt is 1.5-inches thick and uses a magnetic buckle to attach. The belt works best with holsters that have a 1.5-inch belt clip, but it also worked fine with one of my 1.75-inch clip holsters.

Once the belt is installed and the pants or shorts are put on, they feel just like wearing normal athletic clothes and a belt at the same time. Wearing a belt is never as comfortable as not wearing one, but the setup is comparably much more comfortable than wearing most pants that can accept a belt. Arrowhead recommends removing the belt system before washing any of the clothing, but between washings one can leave the belt installed, making them easy to take on and off. In my mind, for the Arrowhead Tactical Apparel concept to be worth it, their products must accomplish two things—comfort while lounging and secure retention during activity. As a remote worker, I tested the former requirement simply by wearing the Carrier Sweatpants most days since I received them. I found that for prolonged periods they are in fact more comfortable than carrying in traditional pants. I wore them primarily while appendix carrying a Makarov in a Vedder LightTuck, and I found that even after several hours of sitting at a desk the gun was hardly noticeable.

Following Arrowhead’s instructions, I made sure not to adjust the internal belt too tightly, leaving enough room to insert a holster without much of a squeeze. The elastic nature of the waistband then works in conjunction with the retention belt, cinching it close enough to your body to keep your pistol secured but not as tight as the average pair of blue jeans with a leather belt. By the end of the day, it still felt good to shed the extra weight, but the desire to do so wasn’t as pressing as after carrying in jeans for several hours. To test the other half of this equation I primarily wore the Carrier Shorts, again mostly with the same Makarov setup, but I also wore them to the gym with a 3.5-inch 1911 and a Jericho 941 for the sake of variety. I wore them while lifting, running and even while sparring a punching bag without any issue. Obviously, when used with the heavier and longer guns, the setup was less comfortable, but the shorts had no issues supporting their weight or properly concealing them.

I was initially a bit skeptical of the magnetic belt buckle, I had never used one like that before. In the end, I found it to be secure as well as quick to use. While running and boxing, I never had the buckle become unclasped, but it did come undone once when getting out of a car and once after using an ab/crunch machine. Thankfully neither of these incidents resulted in any embarrassment or danger, as the belt proved to be rigid enough to support the gun without the buckle secured. Once the buckle came unclasped, the side of the belt with the holster drooped downward but remained securely inside the pants, only requiring a brief re-buckling to remedy it. This didn’t seem to be an issue to me, but it may cause some to prefer using a belt with a different style of buckle, even if it is slower than the magnet. The buckle itself was initially tricky for me to secure without any fuss, but after some practice, it became quite natural. 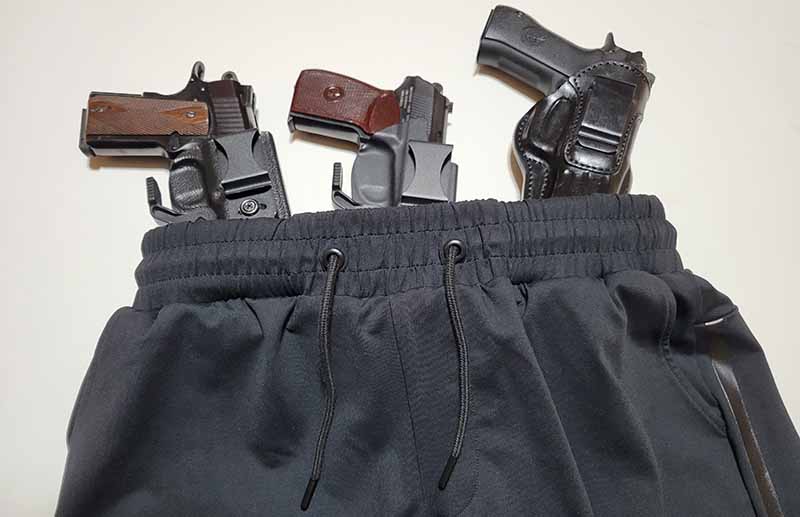 The smallest and lightest gun I was able to test these products with was a Makarov, but the system didn’t have any issues with full-sized steel pistols either. This means that the micro-compact polymer guns that most people carry these days should feel even more secure while engaging in strenuous activity. Furthermore, the fact that the belt system is inside the pants seems to help with concealment. When wearing just the Carrier Sweatpants and a T-shirt, I felt that the extra material on top of the belt helped to prevent printing more than the same setup would with blue jeans. Other companies are currently selling different solutions to the issue of concealed carrying in athletic clothes, but ones typically only compatible with certain types of holsters. Arrowhead Tactical products seem to offer more versatility than these since they can likely be used with every holster and pistol you already own.

Ultimately, I found that both the Carrier Sweatpants and Carrier Shorts performed as advertised, providing a comfortable, concealable solution to both staying armed while at home and the gym. They proved more comfortable than a traditional jeans and belt setup while lounging around the house or running errands, and also proved secure enough to do a serious activity while wearing. The Carrier Sweatpants have an MSRP of $84.99 and the Carrier Shorts are listed for $64.99, but Arrowhead also sells joggers which use the same belt system. A bit pricey for athleticwear, but considering that each pair also includes the necessary belt it seems to be worth it. Each item is available in multiple colors and sizes and the shorts have an option of inseam length as well.

Arrowhead Tactical Apparel’s CCW clothing seems to be an excellent option for anyone looking to stay armed more often and remain comfortable while doing so.