More than 100 years after its introduction, the venerable .30-06 Springfield remains one of the best all-around hunting cartridges. Period.

When it comes to playing with different cartridges, I’m like a little kid on Christmas Eve; I love the subtle nuances of each different development, and to be honest, there are only a few that make me wrinkle my nose. I’ve been privileged enough to spend a considerable amount of time with more than a few of them, either through handloading ammunition for them or taking them afield, sometimes to the more remote destinations on earth. But, just as with your favorite foods or music, you’ll often come back to that which has become an old standby, the one you know will work in any situation.

It’s been with us since 1906 and has seen two World Wars and numerous bloody conflicts just as terrible without the label. It has hunted every continent huntable and has lived through market trends that have bordered on ridiculous. Yet, in spite of a dozen or more would-be contenders to the throne, in spite of modern powders and bullets, and in spite of more than a few gun writers proclaiming its lack of modern validity, the .30-06 Springfield still wears the championship belt proudly.

Why, pray tell? Why would we still be embracing a century-plus-old cartridge design and holding its performance level as the benchmark for .30-caliber cartridges? Because it works so well that it has rendered many other would-be replacements null and void.

Let’s look at the specifications before we delve into the history.

We Americans have embraced the .308-inch bullet diameter — partly due to the performance of the Springfield — with good reason. It represents what might be the most versatile caliber choice, giving the shooter a lineup of bullets weighing between 100 and 240 grains, and offering enough killing potential to take every game animal on the North American continent, as well as the greater portion of African species.

How we drive those bullets has been a source of contention and even argument for a century. Some insist they need to be moving as fast as possible, some feel that a moderate velocity is the best choice, and some others enjoy a wide variety of velocities.

Yes, I’ll agree that the 7mm bore diameter is almost as versatile, but the .30 caliber remains the darling child of American hunters. The 150- to 220-grain bullets remain the most popular for hunting applications, but modern bullet developments have produced some good choices on both ends of those limits.

One of the talking points of the .30-06 Springfield is the fact that the case capacity allows the cartridge to take advantage of the full spectrum of the .30-caliber bullets. This fact, in addition to the muzzle velocity generated, makes for a very well-balanced marriage of flat trajectory, acceptable recoil and striking power.

The .30-06 will drive a 180-grain bullet — an excellent all-around choice for the big-game hunter — to a muzzle velocity of somewhere between 2,700 and 2,800 fps. This is a very respectable speed that will shoot flat enough to make distant shots feasible by a good rifleman, and it will generate somewhere around 3,000 ft.-lbs. of muzzle energy.

To touch on the recoil factor, the .30-06 can represent the top end of acceptable recoil for some big-game hunters, and that’s OK. We all have our limits, and I’d feel more comfortable with a hunter using a .30-06 to good effect than developing a flinch with a .300 Magnum. While there are good reasons to embrace the additional velocity (and correlative energy) of the larger-cased magnums, if the recoil is too severe for you to place your shots properly, the idea is defeated.

In the hunting world, the .30-06 Springfield is one of those cartridges that has probably been used to kill every species of huntable game on the planet — with varying degrees of success on the truly large and dangerous stuff. That said, even the great bears of the North can be taken with a .30-06, though there might be better choices. For deer, pronghorn, elk, moose and most other common North American species, the cartridge simply shines.

The lighter bullets — such as a good 150-grain spitzer — will leave the muzzle at more than 2,900 fps, making for an excellent deer/antelope/sheep load, and the middle-of-the-road 165-grain slugs are cruising along at just over 2,800 fps. The 150-, 165- and 180-grain bullets are the most popular and will handle the lion’s share of your hunting duties; however, if you prefer a bit more bullet weight for the larger animals, the 200- and 220-grain slugs are a sound choice. With fantastic sectional density (SD), those heavy bullets can have quite a dramatic effect and will guarantee deep penetration.

Should you wish to do a bit of varmint/predator hunting with your ’06, the 110- to 130-grain bullets will certainly do the job. However, I feel comfortable saying that using a .30-06 on a hot prairie dog town will start to get a little uncomfortable to even the most recoil insensitive.

The Spanish-American War saw two important developments in American history: the rise of Theodore Roosevelt, and the unified conclusion that the 7×57 Mauser was vastly superior to our .30-40 Krag. The U.S. Army’s Ordinance Department began work on the replacement for the .30-40, and I’ve read several accounts that the .277-inch bullet diameter was considered. However, it seems that the fact that we were geared up to produce .30-caliber bullets influenced the decision to stick with that bullet diameter.

The rim diameter of the Mauser was adopted — at 0.473 inch — but the case was designed at 2.54 inches, or 65mm, which was considerably longer than the Mauser design. The 220-grain, round nosed bullet of the .30-40 Krag was retained, traveling at 2,300 fps, and the world was introduced to the .30-03 in the Model 1903 rifle. It was an improvement over the Krag, but the Army wasn’t quite satisfied.

Three years later, in 1906, the case was shortened to 2.494 inches, and the projectile was revised to a flat-base spitzer of 150 grains. At a muzzle velocity of 2,700 fps, this was rather revolutionary; the downrange performance was better than anything our soldiers had ever experienced. The “Cartridge, Ball, Caliber .30, Model of 1906” was on its way to glory both on the battlefield and in the hunting fields.

It was embraced by Roosevelt, Hemingway, Ruark and other writers who would influence a considerable amount of rifle purchases, and it would end up being loaded in just about every conceivable rifle action — from pump and single-shot to bolt and autoloader — ever produced. Again, it just plain works.

The ’06 was replaced after the Korean War by its little brother, the .308 Winchester/7.62mm NATO, in soldiers’ hands, and it has also had some stiff competition from other .30-caliber cartridges in the hunting world. The .308 Winchester vs. .30-06 Springfield argument still rages on, but I really feel it’s a moot point; in the hunting field, their performance is so close that I really don’t feel any game animal would ever demonstrate a noticeable difference. 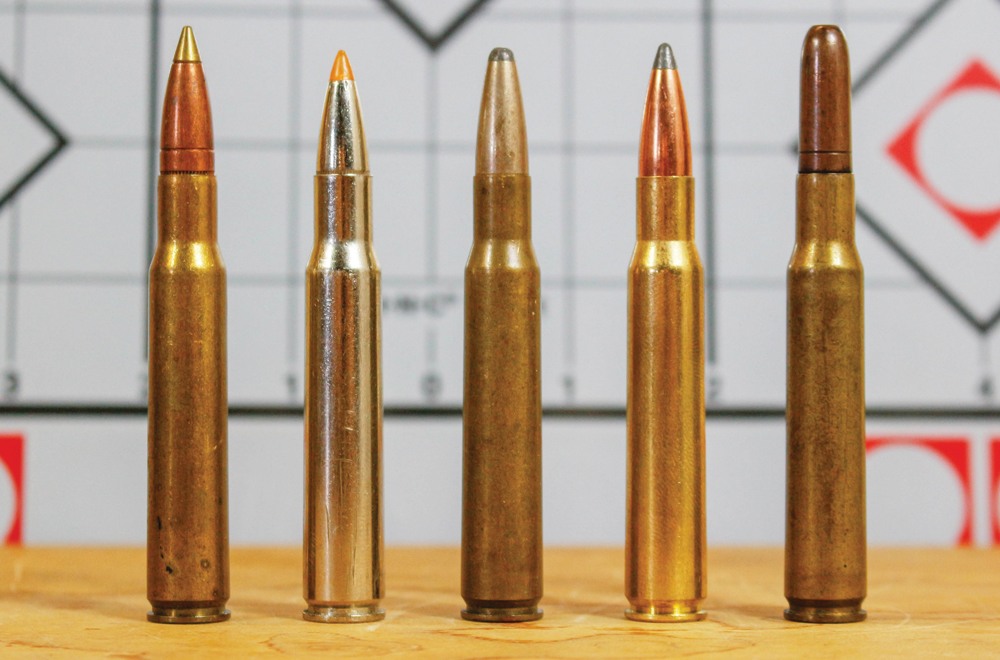 Yes, folks rail about the shorter action being more rigid and a bit lighter, and the opposition cites the better performance of the Springfield with the heaviest bullets, but I’ve used both, and I would be equally comfortable using either. I’ve long been a fan of the .300 Win. Mag., as the rifle I have is extremely accurate and I do appreciate the additional horsepower in certain situations, but I can honestly say that any shot I’ve made with my .300 could have been made with a .30-06. The velocity and trajectory differences aren’t really all that radical.

There have been other .30-caliber cartridges that have come and gone, or are hanging on for dear life — the .30 TC, the .300 RCM, the .300 Savage and there are others — that have had a brief moment or possibly even a good run, but none have equaled the legacy of the Springfield. Even the larger magnums such as the .300 Weatherby, .300 Remington Ultra Magnum and the like have a definite following, but not like the .30-06. You can find ammunition nearly anywhere, but that is the effect of the popularity, not the cause.

The bottom line is this: In spite of its age, the Springfield design represents the penultimate balance of powder and bullet weight, in a case that can be housed in a rifle of reasonable length. I’ve never had an issue with the action length of a rifle; even the .375 H&H-length actions can be made to run very fast in the hands of an experienced rifleman. I feel, personally, that too much time is spent squabbling over a half-inch of case length, or a pound of rifle weight. That time would be much better spent learning how to properly shoot whichever cartridge/rifle combination you’ve chosen from actual field positions.

If you’ve chosen an oddball, so be it, and may it serve you well. Just please realize that among the popular medium-caliber hunting cartridges, the .30-06 is, was and shall be that against which all others are judged.