Once an afterthought for rifle shooters, straight-walled cartridges are surging again thanks to some states' hunting laws.

What Are The Hot Straight-Walled Cartridges:

There was a time when rifle cartridges did not look as “sexy” as they do today. The cartridge cases were long and short but without shoulders. Cartridges such as the .45-70 Government and .44-40 Winchester—both circa 1873—were common long-gun chamberings. But the self-contained centerfire cartridge advanced into the 20th century, and cartridge cases shaped like those of the .30-30 Winchester and .30-06 Springfield became the norm.

For the most part, the straight-wall cartridge has been obsolete for more than 100 years. Ironically, it’s once again becoming popular.

The reason has nothing to do with modern ballistics: It’s all about the law. Several states that used to allow only shotguns for deer hunting are now permitting straight-wall rifle cartridges. Even the most ballistically inept hunters—such as those who will not accept or understand the advantages of the 6.5 Creedmoor—are savvy enough to understand that just about any rifle cartridge has more reach and precision than a shotgun slug.

This newfound legal opportunity has brought back interest in old cartridges that were near teetering on extinction or just holding on due to nostalgia. It’s also spawned a new cartridge (humans will always find a way to use the “law” to their advantage).

The Barnes VorTx 300-grain TSX load generates 25 percent more energy than the original .45-70 load and is suitable for just about any critter anywhere. With more than 3,500 foot-pounds of muzzle energy, the Buffalo Bore 430-grain, hardcast bullet is suitable for anything walking on four legs. In fact, I’ve used that load to take two African buffalo.

Doubletap offers a similar loading, and the LeverEvolution loads from Hornady shoot flat enough to make hitting at 250 yards uncomplicated.

Mostly a longer version of the .44 Magnum, the .444 Marlin uses a 0.429-caliber bullet. Designed by Marlin in 1964, it became a favorite cartridge for deer hunters and developed an almost cult-like following. This is understandable: The ability to launch a bullet of 250 grains or more at 2,300 fps was impressive. Hunters felt the push when they pulled the trigger, and the deer felt the whack when the bullet hit home.

The .444 Marlin is not as popular as it once was. This is partly due to the acquisition of Marlin by Remington Arms, along with the subsequent discontinuance of the lever-action rifle it was chambered in. However, for 2019, Marlin reintroduced the .444 in the Model 1895 rifle; and, as straight-wall cartridges go, this is a good one.

Introduced in 1978, Winchester’s .375 was designed specifically for its Model 94 lever-action rifle. It’s essentially nothing more than a shortened version of the much older (1876) .38-55 Winchester that’s loaded to a much higher pressure. While no modern rifles are chambered for the .375 Winchester, you can find them on the used market, and Winchester still offers a 200-grain Power Point load at 2,200 fps. It will shoot a bit flatter than the .45-70 Government or .444 Marlin.

Go Big With These Ammo Articles:

Originally loaded with black powder, the .38-55 is about as extinct as a cartridge can be, but ironically, several companies load ammunition for it. The Winchester factory round is rather anemic; it launches a 255-grain bullet at about 1,300 fps. However, Buffalo Bore has a 255-grain load rated at 1,950 fps. And—get this—it can be fired in any .375 Winchester rifle or any .38-55 designed to be used with smokeless powder.

There is a variety of lever guns chambered for the .357 Magnum. Some mistakenly consider it light for deer, but it’s an ideal short-range whitetail cartridge that’ll shoot much more accurately than any slug. One of my good friends has one in a modern 1873 Winchester, and during one season, he and a handful of other hunters used that rifle to take over a dozen deer, all with one shot each.

Generally, and more than most shooters can take in a revolver, the .44 Magnum makes an ideal straight-wall cartridge for deer hunters. There’s a wide array of factory loads to choose from and, like the .357 Magnum, it will deliver better accuracy than slug guns. A compact lever gun in .44 Magnum is an excellent walking-around whitetail rifle in any state.

The .450 Bushmaster was designed specifically for the AR-15. A straight-wall, .452-caliber cartridge with a rebated rim, it’s capable of pushing a 250-grain bullet to 2,200 fps. At introduction, it received a lot of fanfare but soon faded into, well, near oblivion. This was partly because it was introduced at about the time of the AR-15 craze that hit the United States (at that time, everyone wanted an AR in .223 Remington). It was also partly because few rifle manufacturers got behind the cartridge.

Now, the .450 Bushmaster is seeing a grand resurgence, and it’s all because of the straight-wall cartridge allowances. Ruger and Mossberg are offering it in compact bolt-action rifles, and we are starting to see new ammunition being introduced. Of course, its compatibility with the AR-15 is tempting to a lot of deer hunters who were previously regulated to shotguns.

Humans have a way of working around legislation: Give us a rule, law or guideline, and we’ll find a way to circumvent it. This is exactly why the .350 Legend exists. It’s an ideal cartridge for states with straight-wall cartridge allowances. This is partly because it was designed from the ground up for that purpose but also because it’s compatible with “America’s Rifle,” the AR-15.

Winchester released the .350 Legend at the 2019 SHOT Show. It’s nothing more than a .223 Remington cartridge case with the shoulders blown out to form a straight-wall case that will accept a .358-caliber bullet. You might call it a .357 Magnum “on steroids.” Winchester seems to believe the cartridge will be a hit—even in states without the straight-wall restriction, and they might be right.

Ballistics are a wonderful thing, because they provide legitimate/scientific data to support estimations of cartridge effectiveness.

Winchester is offering five factory loads for the .350 Legend. The numbers tell us just what can be expected from this new kid on the block (see the chart above). It should be clear what the .350 Legend brings to the table. Not only will it ballistically compete with traditional deer hunting cartridges such as the .30-30 Winchester and .35 Remington, it also outperforms the .300 Blackout, which is also AR-15-compatible. It should be a hit in states previously allowing only shotguns. For that matter, hunters in other states might find it appealing, specifically because, like the .300 Blackout, it’s also subsonic-capable.

Winchester is even offering a more affordable non-hunting practice load in its USA line. It’s loaded with a flat-tipped, 165-grain FMJ bullet.

I won’t be so bold as to predict the future of the .350 Legend. This is partly because it’s essentially intended for just a smattering of states. Yes, those states have a lot of deer hunters, but it would not surprise me that if in a few years, those same states open up rifle season to more-traditional rifle cartridges. If that happens, the .350 Legend will, in truth, be little more than a legend.

If you hunt in one of the states now allowing straight-wall rifle cartridges for deer, it might be a good idea to pick up a new rifle.

Regardless of the cartridge/rifle combination you pick, you should experience better accuracy and reach than you have with your smooth-bore. The question is, Which straight-wall cartridge is best? Although many like to argue that one cartridge is better than another, that’s really not the case; they all have strengths and weaknesses … and even appeal. 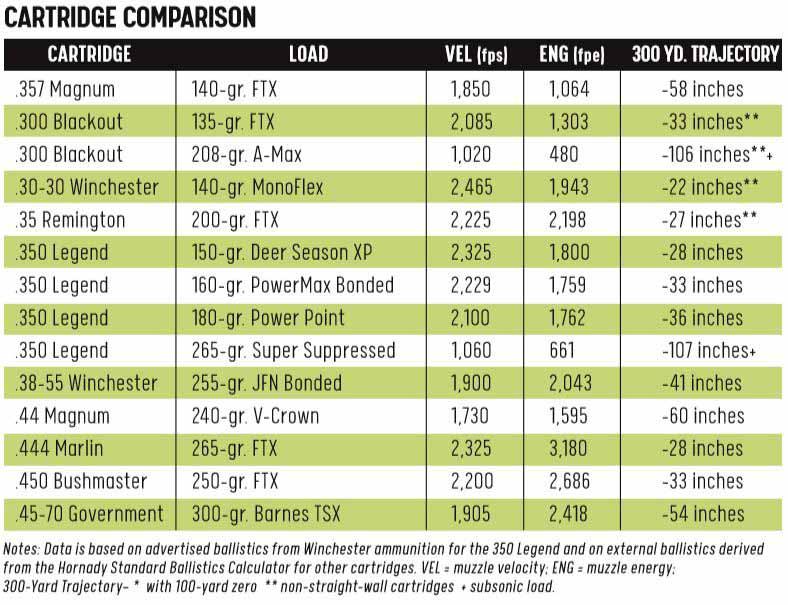 I tend to be a bit old school and would probably go with the .45-70 Gov’t. After all, with modern loads, you can do just about anything with this old warhorse. However, if deer hunting in a previously shotgun-only state were all I ever planned to ever do, a new Ruger or Mossberg in .450 Bushmaster might be the way to go; and the .350 Legend has a great deal of appeal, given its external ballistics, lesser recoil and subsonic capabilities.

Bottom line: Pick the one you like the best. If you can shoot, it really won’t matter all that much: They’re all deer-killers.