Load up on the right 6.5 PRC ammo and you take your shooting to a new level.

For all the recent fervor around the 6.5 caliber and all their long-range goodness, the 6.5 PRC has proven a slow burn. Don’t misconstrue this. Guns for the magnumtized 6.5 Creedmoor have flourished and the heavy-hitting six-and-a-half has developed a dedicated following—especially among hunters—since its release a few years back. But the comparably, the 6.5 PRC has taken rear mammary to its smaller sibling. The proof is in the pudding, ammunition selection.

Thumb through the virtual pages of any ammo retailer and you find the pickings are somewhat slim for the big dog 6.5. Not nil mind you, but compared to the new(ish) 6.5 Creedmoor—heck even the little cousin 6mm Creedmoor—6.5 PRC ammo doesn’t abound. Luckily what’s out there is good, particularly if you’re looking to take the 6.5 on the hunt. We’ve select four of the best 6.5 PRC ammo options out there presently, hopefully, there’ll be more as the years ware on. But before we go there, perhaps we should discuss why you might want to consider the beltless magnum.

Aside from the stock answer of, Why the heck not shoot it?, there’s a pretty simple reason—it outperforms the 6.5 Creedmoor. You get all the ballistic goodness of the caliber, backed up with a larger powder charge. That means more velocity, which leads to better downrange and terminal performance.

The brass tacks are thus, the 6.5 PRC has 28 percent more case capacity than the 6.5 Creedmoor, which producing an 8-percent increase in velocity. Downrange makes a difference. Take a 6.5 Creedmoor and 6.5 PRC ammo loaded with the same bullet, you’ll deal with nearly 50-inches less drop at the 1,000-yard mark and enjoy another 250 or so yards more super-sonic flight with the bigger 6.5 cartridge. Not small potatoes.

In the bargain, you’ll still get a relatively mild shooting caliber. Will it kick? More than a 6.5 Creedmoor, but much less than a majority of magnum-class cartridges—of course, depending on the heft of your rifle. It certainly not as drastic as jumping from .308 Winchester to .300 Winchester Magnum. Additionally, the 6.5 PRC is absolutely dynamite on large game, leading many to dub it the ultimate hunting round in the caliber. Pretty tidy package, all in all. 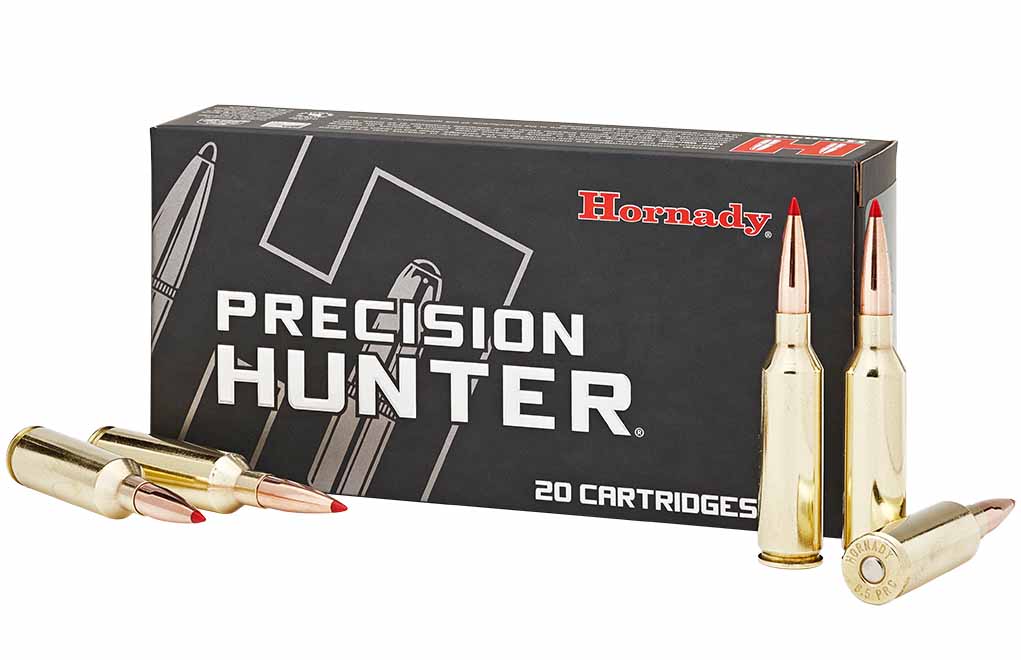 The roots of the cartridge don’t get any deeper than this. Along with Hornady Match, Precision hunter was the 6.5 PRC ammo option to hit the market and still stand up against the competition. The stuff is loaded pretty hot, pushing a 143-grain ELD-X bullet 2,960 fps at the muzzle, giving it the chops to harvest game at the limits of an ethical shot. While the bullet itself has an excellent ballistic coefficient (.625) thanks to its sleek secant ogive, boattail design, and heat-resistant polymer tip, it also performs admirably once it’s at its destination. Designed to retain 50 to 60 of its weight, no matter the distance, the bullet produces devastating wound channels on whatever you lay your crosshairs on. Nosler has met few 6.5 cartridges it didn’t love—this includes the PRC. Luck for hunters, given its Trophy-Grade AccuBond stuff, is among the most potent big-game medicine on the shelves. Topped with the 140- and 142-grain polymer-tipped AccuBond bullets, the 6.5 PRC ammo is tough enough to handle the likes of elk, moose, and everything down. Boasting a bonded-core, the bullet won’t fly apart once at its terminal destination. Aided by the 6.5 exceptional sectional density, it bores deep into game ensuring you hit vitals. It’ll fly too. With a respectable .509 ballistic coefficient, expect Nosler Trophy grade to excel even at your limits. 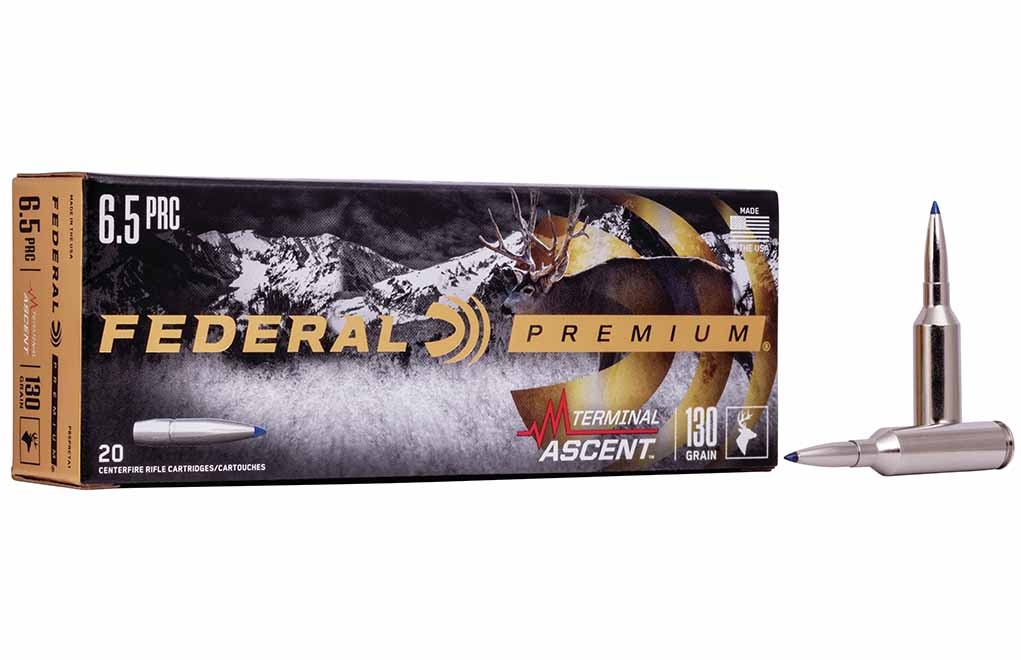 A bit lighter, but no less devastating opting, Federal’s 130-grain Trophy Accent is another option that gets the caliber to live up to its full ballistic potential. A few of the ammo’s basics. The Terminal Accent bullet (.532 BC) is polymer-tipped and has a bonded core, ensuring it hangs together once at its target. And Federal loads them so they scoot at 3,000 fps at the muzzle. But the bullet itself has some interesting design features not found in other 6.5 PRC ammo. In particular, it has a specialized groove, which aids in optimal performance out of a wide variety of rifles. No secret sauce there. But how it’s designed, with an angled rear wall, improves its aerodynamics and reduces bullet drop at longer ranges. Trophy Accent is a great option for those long, windy shots at pronghorns on the prairie or sheep in a gusty basin. 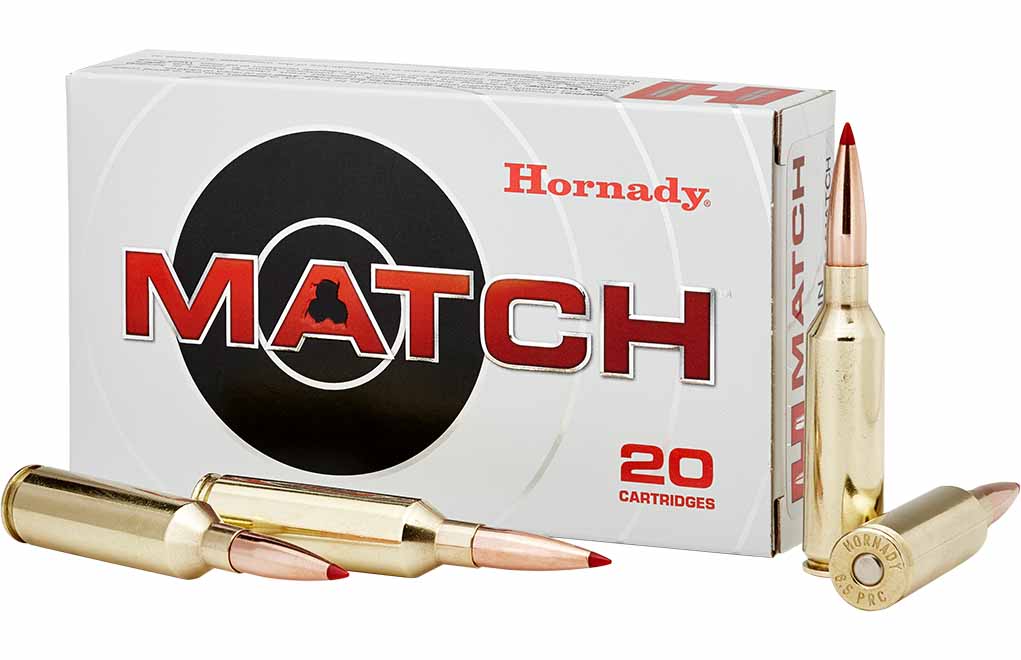 As we alluded to above, there’s another Hornady option on this list. The bad of the matter, at present time it’s about the only factory loaded 6.5 PRC ammo tailored to match shooting on the market. Picking are slim folks. The good, it’s an excellent long-range option. Hornady’s Extra Low Drag (ELD) bullets are a favorite of competitive shooters and don’t disappoint in this ammo. A bit heavy for caliber, the 147-grain bullets deliver a highest-in-class ballistic coefficient at .697. This adds up to a projectile that shoots flatter and is more impervious to wind drift. It also maintains its BC in flight, thanks to its heat impervious Heat Shield tip that does not degrade due to air friction. The larger bullet means a tad less case capacity, but Hornady still goes to the hilt, milking 2,910 fps of velocity at the muzzle from it.