With an insane amount of run time between battery changes, the ACRO P-2 gives shooters peace of mind the red dot is ready when they are.

How The Next-Gen ACRO Is Enhanced:

What’s every shooter’s concern with a red dot? While there might be a multitude of answers, one voiced by most is: Will the dang thing work when I need it to? Unless you’re buying off Alibaba, generally this isn’t a concern over the quality of the device, but how quickly it sucks power. It’s difficult to tick off 10,000 or 15,000 hours of run time in your head and gauge how much juice a battery has remaining. Then again, you almost don’t have to with the new Aimpoint ACRO P-2.

Battery changes, yeah, they’re still part of the deal with the company’s next-generation Advanced Combat Reflex Optic (ACRO for short). But the company has made them a blue-moon occurrence with the device offering up 50,000 hours of run time on a single CR2032 battery. For those who don’t count their lives in 60-minute increments that’s 5.7 years. Thank those Swedish engineers for the upgrade, opting for the high-capacity battery, thus giving you a touch more coin for ammo, not to mention peace of mind.

Improving battery life plays in well to the overall ethos of the ACRO P-2. From the beginning, the red dot helped defined rock-solid emitter systems—the type you’d bet your life on. Where hand wringing comes in on this style of sight is debris, dust or moisture interrupting the projection of the red dot onto the window. Aimpoint figured the answer was easy as hopscotch, just enclose the dang thing then all the crud from the field stays, well … in the field. At the same tick, shooters reap the spoils, one of the lightest systems out there, one with a minimal footprint to boot. Aimpoint isn’t alone in employing the concept, the Holosun HE509T and Sig Sauer Romeo2 also follow the same formula 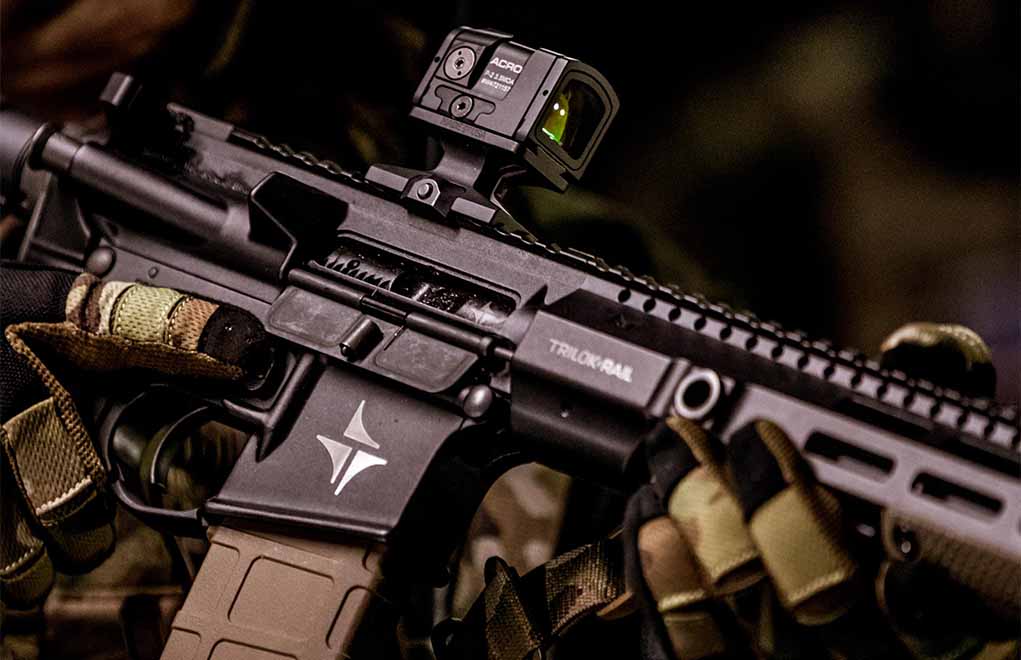 Aimpoint didn’t muck with its winning formula in the creation of the ACRO P-2. In fact, the sight follows much of the same layout as its older sibling. Nice, given the battery compartment is on the side, so you can swap it out without taking the optic off and losing your zero. But they did tinker around with a bit more than the battery. Also getting an upgrade is the LED emitter, which is higher efficiency, but produces a 3.5 MOA dot equally as sharp as the P-1.

Brass Tacks Of The ACRO P-2

Of other notables, the only drastic interface change on the P-2 is Aimpoint moving the brightness controls nearer the battery case. The idea is to protect the settings from fat fingers and other errant adjustments. From there, the new ACRO is fairly familiar to those who know the P-1. This includes a sealed high-strength aluminum case, flat panes of glass on both ends, 10 brightness settings (4 night vision, 6 daylight) and a variety of mounting options making it compatible with a wide swath of firearms. The 1x, parallax-free optic also adds next to nothing to a firearm, weighing all of 2.1 ounces and measuring in at 1.9x 1.3 x 1.2 inches—fit for rifle, pistol or shotgun. As far as price, it is an Aimpoint, so the $599 MSRP should come as a shock to anyone. But even in the face of a bevy of less-expensive, enhanced red dots hitting the market in recent months, the uncompromising shooter most likely will still find the ACRO P-2 a value.

For more information on the ACRO P-2, please visit aimpoint.com.