There are many ways to carry one’s armor and gear, so here are some things to consider when choosing a plate carrier setup.

As we touched upon in our body armor buyer's guide, there are a few different methods of carrying hard armor plates and the gear that goes along with them. The biggest divergence between plate carrier setup styles is whether one chooses to attach their gear to the plate carrier itself, or if they decide to run a slick carrier with some sort of chest rig or load-bearing equipment (LBE) on top of it.

As evidenced by those who wear body armor professionally, each mission may have different requirements that can influence what plate carrier setup is best for that day. Here we’ll look at the pros and cons of each system in terms of the everyman and attempt to help determine the best setup for your specific needs. 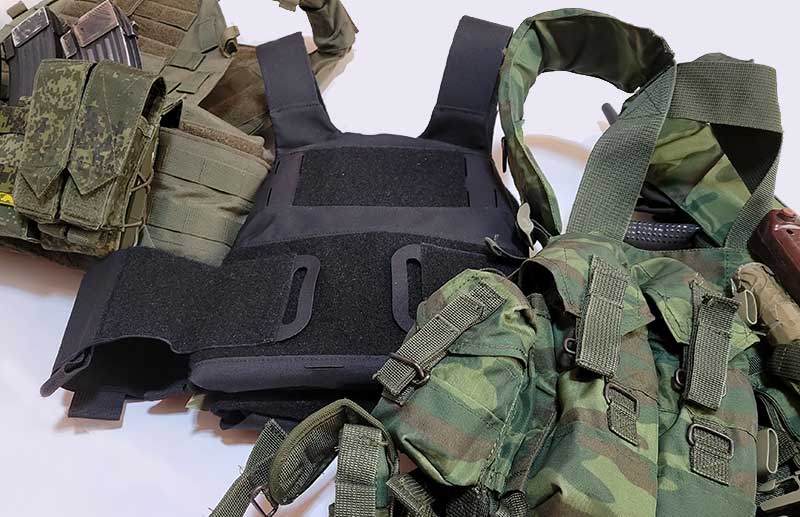 The most common way of wearing body armor today includes the use of a traditional plate carrier setup, meaning that the vest used to retain the armor plates is also used for carrying extra gear. Plate carriers are not a replacement for backpacks, however, and should only be used for carrying gear that may need to be accessed quickly like spare magazines or medical equipment. This is typically accomplished using the MOLLE webbing found on most carriers.

MOLLE accessories can be a bit of a pain to initially install, but it is still a very doable process. Some typical items that can be found on modern warfighters’ plate carrier setups may include various styles of magazine pouches, an IFAK (individual first aid kit), a tourniquet, a water source, a radio and sometimes a holster for a sidearm.

Soldiers often carry things like grenades on their carriers as well, but obviously, as civilians seeking ways to improve our defensive capabilities, these are unfortunately not an (legal) option. Other gear commonly worn on military setups may also be useless to you, such as a radio if you live alone, so one must consider each item specifically for their needs rather than just copying what military members may do. Different plate carrier styles can make attaching certain gear either easier or harder, and one should choose the vest they purchase accordingly. Carriers that are patterned more after military-style models often include provisions for cable management, which can be extremely useful for those who wish to run more advanced communication systems or CamelBak-style water sources.

How MOLLE is arranged around the plate carrier is worth paying attention to as well, as some styles lend themselves to mounting certain items better than others. For example, if you plan on carrying your sidearm on a plate carrier-mounted holster, you best ensure that your intended holster will fit where you want it to without disrupting the use of other items. With such a plethora of different vests and pouches on the market, it’s a good idea to plan most of your plate carrier setup out before you begin buying anything.

Some people purchase slick-style rigs and then attempt to build them up into more traditional plate carriers, but this usually ends up being more expensive and less practical than choosing a traditional style from the get-go. Again, one should think about what situations they predict being involved in that would justify dawning their body armor. A basic home-defense plate carrier setup will be very different than one intended to be used for days on end during the apocalypse.

I still have the first plate carrier setup I put together, but I’ve since moved on to using a slick rig plus load-bearing equipment. The short answer as to why was because I decided that I value comfort more than speed. Traditional plate carrier setups have many potential advantages, including ease of access to gear, faster on/off times and greater versatility for mounting things like pouches. After spending a decent amount of time LARPing on the range with my kit on, however, I felt like I could do better. The traditional plate carrier was quite bulky, and I felt that it didn’t distribute the weight of my gear ideally, impeding both my general comfort and perceived mobility.

Also, the load-bearing equipment I’ve chosen to wear over my slick plate carrier is better suited for the items I’d like to carry. While the integrated pouches are locked into their positions and accessing their contents is slower than on my traditional plate carrier setup, it provided more pouches for carrying the gear that I did want to have. Most importantly, I felt that the slick rig/LBE combination was more comfortable to wear and move in.

The LBE I use has an integrated holster for a pistol on its belt, and it also allows for the wearing of a backpack or water supply. Backpacks in relation to plate carriers is a whole separate discussion with many different considerations, so we will be covering those in a separate article. The pouches on my LBE allow for the easier carrying of small items like spare batteries compared to my traditional carrier as well.

There are many good slick-style plate carriers to choose from, and plenty of good chest rigs and load-bearing vests as well. There are too many to cover here, but we will look at several options in a separate article. Put simply, the main advantage of a slick carrier and LBE combo is its potential to better distribute the weight of your gear around your body.

Again, it’s worth mentioning that much of this depends on the LBE/chest rig that you’ve chosen and one’s personal preferences. Those who are planning a setup around AR mags will have many more options to choose from, but for those like me who run AKs or more obscure platforms, they will be mostly limited to surplus models. My current LBE is Russian and a bit outdated, but I found that it works well for my needs.

When it comes to choosing one’s plate carrier setup, there is, unfortunately, a lot of subjectivity and trial and error involved. It is unlikely that you will be completely satisfied with the first setup you acquire, but having some level of extra protection is always better than nothing. Many of the considerations involved will pertain to your lifestyle, where you live and what type of defensive situation you are anticipating.

It’s also worth keeping in mind that just because modern militaries have opted for a certain style of plate carrier, that doesn’t mean the reasons for those changes will benefit you. For example, militaries today have become concerned with the ability to rapidly remove their armor in case of being wounded or falling into a deep body of water. This has led to the phasing out of the slick carrier/chest rig combos that were used extensively in the early GWOT days and their replacement by traditional carriers that have gear mounted directly to them. It has also resulted in most modern plate carriers having some sort of quick detach system. The reality is unless you have a medic following you around or plan on wearing your rig on the open ocean, the benefits that these new models provide are less valuable.

Most civilians looking for a plate carrier setup will likely be fine with more rudimentary gear. The primary concern is the ability to wear hard armor plates comfortably and effectively, followed by the ability to carry spare magazines for your rifle. How those goals are achieved will look wildly different between individuals. Whether you end up with an uber-tactical plate carrier decked out with high-speed taco mag pouches or a simple slick armor carrier with a generic chest rig worn over it, you will already have a great advantage over those who have nothing of the sort. Whatever you settle on, just remember to wear it while you train.