A comparison between two popular PCCs from Ruger: the PC Carbine and the PC Charger.

The idea of a pistol-caliber carbine (PCC) extends back—well before the turn of the 20th century. The appeal was the ability to share ammunition between a rifle and a handgun. From about 1873 until the dawn of the smokeless cartridge, this practice was common with cartridges such as the .32-20, .38-40 and .44-40 Winchester. Ironically, those cartridges were rifle cartridges that became popular in handguns. With the introduction of rifle cartridges such as the .30-30 Winchester and pistol cartridges such as the 9mm Luger and .45 Auto, especially after World War I, this practice began to wane—partly because rifles could then dramatically increase reach and effectiveness and partly because the pistol began to replace the revolver as the preferred sidearm. Also, at about this time, shoulder-stocked pistols and the submachine gun became popular.

The first notably successful, commercially available PCC was the Marlin Camp Carbine. Introduced in 1985, it was a 16-inch-barreled, semi-automatic rifle chambered for either the 9mm Luger or .45 Auto. An aspect that made this carbine so appealing was that the .45 Auto version used 1911 magazines, and the 9mm Luger version used Smith & Wesson 59-series pistol magazines.

Both were popular at that time. The Camp Carbine was marketed for use in hunting camps and for survival. Interestingly, it might have become more popular after it was discontinued in 1999. Then, Americans began to become more tactically or survival minded, and the little, 6½-pound Camp Carbine seemed like a very practical implement.

To fill this gap, manufacturers who made AR15s began building 16-inch-barreled carbines designed for the 9mm Luger and other pistol cartridges, and the modern pistol-caliber carbine was born. Recently, we’ve seen this concept evolve into pistols with shorter-than-16-inch barrels that’ll accept what’s become known as an “armbrace.” This is intended to be strapped to the shooting arm to better help control these rather heavy carbines-turned-pistols.

Although it’s not an AR15-type design, a perfect example of this evolution is the Ruger PC Carbine. Originally introduced in 2017 as a carbine that fired a pistol cartridge, it’s now evolved into a pistol—the Ruger PC Charger. This Ruger PC platform, in either the Carbine or Charger version, is getting a lot of attention; and some might be wondering which is the best option.

Counting distributor-exclusive models, Ruger currently offers 19 variations of the PC Carbine. The original version has a traditionally styled polymer stock and somewhat resembles the discontinued Marlin Camp Carbine in looks, shape and size. For those looking for a handy carbine with minimal recoil for camp use, survival applications or just for fun at the range, this little, 6.8-pound carbine is ideal.

The most recent version uses a chassis-like system with a modular design. It has the look of a weapon that might be used in some sort of tactical environment and comes with a free-floating handguard that’ll accept M-Lok accessories. It could also be used in the same ways as the standard version, but with the ability to accept a collapsible buttstock and various handguard-mounted accessories, it’s a bit better suited for, well … fighting.

There are three features that really set the PC Carbine apart from AR15-style PCCs and the Marlin Camp Carbine.

For starters, the PC Carbine is a takedown rifle. Just forward of the receiver on the underside of the forend are a recess and a button. After loosening the adjustment ring around the barrel (which is just forward of the receiver), when this button is pressed, the forend and barrel can be rotated and removed. Assembly is in the reverse order. The process takes fewer than 10 seconds. This permits the PC Carbine to be stored in a compact pack or case.

The second cool aspect of the PC Carbine is its ability to accept several different pistol magazines. Due to the ingeniously designed magazine well module, in a matter of a few minutes, you can convert the PC Carbine to accept either Ruger American, Ruger SR Series or Glock magazines. This can be important if, as in the spirit of the Marlin Camp Carbine, you want to use the PC Carbine as a sort of survival-/tactical-type firearm and be able to share magazines between your handgun and long gun.

The third appealing feature of the PC Carbine, and the one I liked the most, was the ability to move the charging handle from the right side of the action to the left. This might seem unimportant but, in conjunction with the reversible magazine release, it allows a right- or left-handed shooter to run this rifle through multiple magazines and even through stoppages—should they occur—without rotating the gun or ever removing their shooting hand from the grip/trigger area.

I’ve worked a good bit with what might be called the “hybrid” version (Model #19115) of the Ruger PC Carbine. This particular rifle has the conventionally styled polymer stock, but instead of a polymer forend, it’s fitted with the free-floating handguard. The carbine comes with an aperture-style rear sight and protected-post front sight. Both are barrel mounted. But, it also has a 16-slot Picatinny rail that’s integral—not screwed to—the receiver. I found that with a compact reflex sight, I could quickly and reliably hammer a torso-sized target at 100 yards, and even make precision head shots at half that distance. 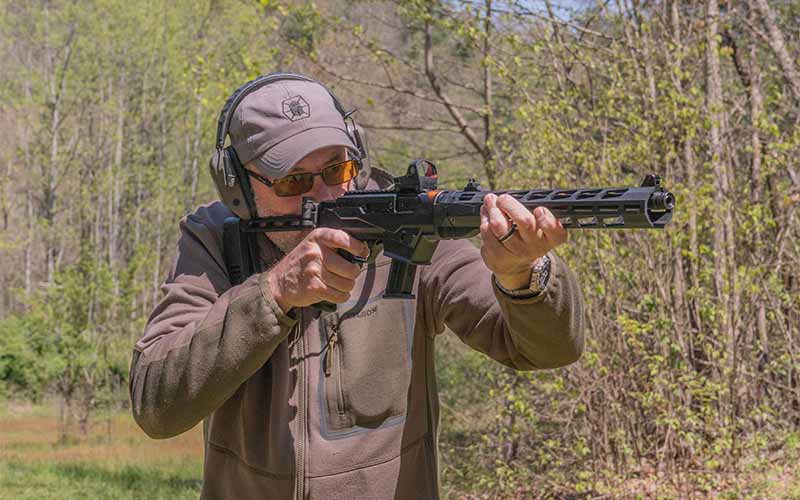 In the spirit of how Ruger transitioned its 10-22 rimfire carbine into the .22 Charger pistol, it did the same with its PC Carbine. Ruger took the base chassis version of the PC Carbine (Model #19122) and shortened the barrel to 6.5 inches. It also removed the buttstock, which was attached via a vertical Picatinny rail section on the rear of the chassis. This reduced the overall length from 35.50 inches to 16.50 inches and the weight from 7.3 pounds to 5.2 pounds. As opposed to the 13.5-inch handguard on the PC Carbine, it’s only 4 inches long on the PC Charger.

One stark difference between the Ruger PC Carbine and the PC Charger is that the PC Charger doesn’t come with any sort of sights. It does have the integral Picatinny rail, but you’ll have to install some sort of optical sight—or at minimum, a laser—in order to reliably hit anything more than arm’s length away (three versions of the Ruger PC Carbine also come without sights). Other than that, along with the addition of a handstop (to keep your support hand from inadvertently slipping in front of the barrel), everything else is essentially the same on these two firearms.

In a previous Gun Digest article, I discussed in detail the many different ways you can effectively and legally shoot the Ruger PC Charger or similarly styled pistol. I won’t rehash that here, but I will say that the best way I’ve found to shoot this pistol is with the addition of an armbrace…or, at least with a single-point sling and sling tension. A 16-inch, 5-pound handgun is simply nearly impossible to shoot with precision, speed and comfort in any other fashion.

When it comes to a camp gun, home-defense firearm or some sort of survival weapon, the question used to be “Carbine or handgun?”

With the rise in popularity of PCCs, you can now have a carbine and pistol that share the same ammo and even magazines. That makes a lot of sense: A rifle-like gun is easier to control and easier to get hits with at longer distances than a pistol. There’s an obvious reason gunmen prior to the turn of the 20th century liked the idea of a handgun and rifle that used the same ammunition.

Where things now get a bit muddled is with guns such as the Ruger PC Charger. By definition, it’s a pistol. It’s also—by any observation—not a pistol you can carry around comfortably on a belt holster (there’s a reason the PC Charger has a single-point sling attachment point). Pistol or not, with the attachment of an armbrace to the PC Charger—particularly a folding version—you might find yourself torn between it and a PC Carbine.

Which Is The Better Option?

Many might find my opinion controversial on this matter. However, it’s based on practical application, common sense and ballistics. Neither the PC Carbine nor the PC Charger are long-range weapons; putting a 16-inch barrel on a 9mm Luger will only give you a velocity advantage of about 200 fps. In some cases, this increase in velocity can decrease the penetration potential of self-defense ammunition. Some personal protection loads for the 9mm Luger aren’t designed to be fired at carbine barrel velocities. These higher-impact velocities can result in overexpansion, sometimes fragmentation and less penetration. Of course, this isn’t an issue with non-expanding, full-metal-jacket ammunition. From a terminal performance standpoint, bonded bullets are the best option for carbine-length barrels.

Additionally, while a longer barrel with conventional sights might help with accurate shooting, from a practical standpoint, both of these guns need an optical sight, such as a reflex or red-dot, for optimal performance and, with it, any sight radius advantage is lost. I could only squeeze an infinitesimal amount of additional precision out of the PC Carbine’s longer barrel at distance; and considering that you can zero either gun any way you like, the difference in trajectory between the two barrels/velocities was of no real consequence.

Besides the fact that the least-expensive model of PC Carbine costs $150 less than the PC Charger, I see no reason not to opt for the Charger. It is much more compact and lighter, and if you intend to carry this gun in a vehicle or even an UTV, the more-compact Charger is much more suited to the task. (By the way, both the PC Carbine and PC Charger are offered in state-compliant versions.)

I’ll add that if you own a PC Charger (Model #29100) and a PC Carbine (Model #19115), you can remove the barrel from the PC Carbine and put it on the PC Charger, effectively turning the PC Charger into a PC Carbine. (Disclaimer: I’m not suggesting this is something that Ruger recommends. I’m only saying that it’ll work. This is also completely legal and gives you even more options.) However, you can’t do the reverse and make the PC Carbine (rifle) a pistol by installing the shorter PC Charger barrel—that’s a go-to-jail-and-do-not-pass-go action!

I find it hard to conceive of many situations for which the PC Carbine is a better option than the PC Charger—unless you intend the weapon to always and only be fired and used as a rifle. For a basic, utilitarian, ranch-type gun, the PC Carbine might have more appeal. If, on the other hand, you plan for the weapon to serve in a home-, camp- or vehicle-defense roll, the PC Charger, with its compactness and the many ways it can be effectively employed, seems the better option.