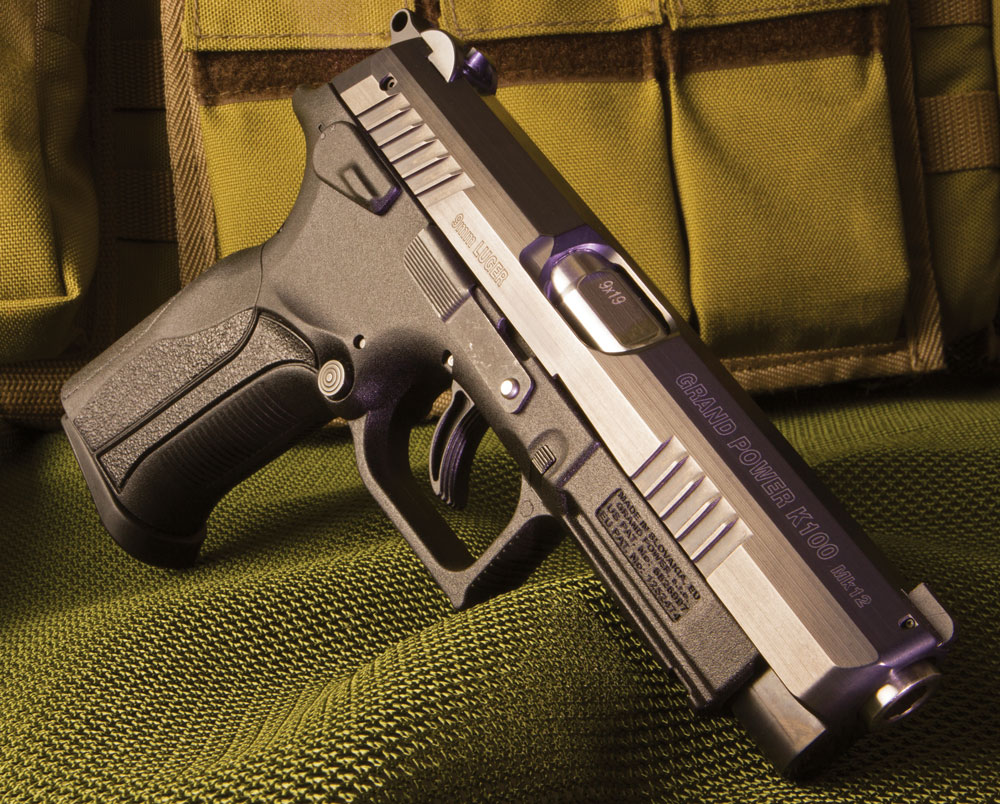 Manufactured in Slovakia, the Grand Power K100 Mk12 is a high-quality polymer pistol import with an innovative design offering tons of performance for the money. If you think a handgun made in Eastern Europe is going to be of low quality and have a rough finish, you haven’t seen the Grand Power K100 Mk12 imported by Eagle Imports. The pistol’s interesting design and action, while not revolutionary, have some serious benefits not found on many other higher priced guns. While currently used by some foreign government agencies, the K100 and its siblings are also catching on here in the U.S. among competitors and people interested in self defense.

Although this polymer-framed gun has a steel slide and barrel that are common today, the action is not. Instead of a tilt-barrel, modified Browning design, it uses a rotating barrel, which helps make shooting the gun easier. While recoil is perceived differently by shooters, I found it to be quite a bit less compared to other guns in the same chambering and of similar size and weight boasting of reduced felt recoil. The test gun also proved to be quite a bit more accurate than many other guns of similar size I have tested.

Unlike many currently produced pistols, this one does not have a barrel with a link that swivels on a pin, or an under-lug that rides on a caming surface to tilt the rear of the barrel down to unlock it from the slide. Instead, unlocking occurs when, under recoil, the barrel rotates, which disengages a lug on the barrel from a channel in the slide. The bore axis remains in the same orientation to the slide and frame, which allows the barrel to be set slightly lower in the frame, putting it closer to the shooter’s hand. This in turn reduces the recoil’s leverage on the shooter’s wrist and makes it easier to control muzzle flip. As a result, the sights get back on target faster and recoil feels less.

The comfort factor is important but is highly subjective, and what may be comfortable to one may not be for others. However, with four interchangeable backstraps of different sizes, it is likely the K100’s grip size can be adjusted to suit most anyone. And it is easy to do. Just pry the backstrap off and snap on a replacement.

Another notable feature of the K100 Mk12 is that controls really are ambidextrous. An identical but reversed thumb safety, slide catch and magazine release are located on both sides of the gun. The only thing that isn’t ambidextrous is the ejection port, but on a handgun, that is generally of no consequence.

Although two different trigger pulls must be mastered with the K100, the test gun’s trigger had a very smooth, consistent pull of about 10 pounds in the double-action mode, and when in single-action mode, it broke cleanly without any creep at about 5 pounds after a small amount of take-up. There was no perceived overtravel, and reset was distinct. The trigger has a grooved surface to reduce slippage and was comfortable over long periods of shooting.

The thumb safety is large enough I was able to manipulate it with the thumb of the firing hand without modifying my shooting grip. The slide catch was also easy to engage, and the ambidextrous magazine release could be activated with either the thumb or trigger finger. When pressed, the magazine dropped freely away from the gun.

Sights on the K100 Mk12 consist of a drift adjustable rear sight with two white dots and a pinned front sight with one white dot. The gun is sighted at the factory, and Grand Power thoughtfully provided two extra front sights of different heights with the test gun in case the sight elevation needed adjustment. That’s a nice feature not many manufacturers include. The slide, instead of having the uninspired square, blocky appearance so common today, has seven sides giving it an almost curved profile when viewed from the rear. It is made of 34CrNiMo6 steel, is very nicely machined, polished and finished in a black nitride salt bath that leaves a very hard and corrosion resistant surface. All edges are nicely beveled; the ejection port is large, and there are deep serrations at the front and rear of the slide that offer a solid grip for cycling by hand. The barrel and the frame insert on which the slide rides are made of steel, and while the insert is nitrided with a black finish, the barrel is left in the white and is highly polished. Traditional land and groove rifling is used.

The frame has a Picatinny-style rail on the dust cover that allows for attachment of a light or laser, and the front of the trigger guard is squared and serrated for those who still like to grasp it with the fingers of the support hand. The front strap is grooved, and most of the rest of the grip has a light stippled texture. There is a slight flare to the magazine well to encourage fast reloads. Field stripping for cleaning is straightforward. After making absolutely sure the gun is unloaded, the disassembly latch—referred to in the manual as the dismantling segment—located just above the front of the trigger guard is pulled down while at the same time the slide is pulled all the way back. At the end of the travel, the rear of the slide is lifted off the frame and then the slide is carefully moved toward the muzzle where it is then separated from the frame. This must be done carefully so the slide does not slip from the hand and get launched under spring pressure. Then the barrel can be separated from the slide and the recoil spring removed from the spring guide, which remains attached to the frame.

Now, assembly, as is commonly said, is in reverse order. But, read the manual first because the barrel must be oriented correctly or the parts won’t fit. Also, some people may have difficulty at this point because pulling the slide to the rear against the force of the recoil spring while simultaneously holding onto the frame and pulling the dismantling segment down can be a challenge.

The gun is supplied in a hard carrying case with two 15-round magazines, a bore cleaning brush and the four backstraps mentioned earlier. The extra front sights of different heights as referred to above are also available. Real world retail prices are significantly less than the manufacturer’s suggested price, so there is a lot of gun here for the money. For more information, contact Eagle Imports. EagleImportsInc.com. This article appeared in the November 2015 issue of Gun Digest the Magazine.