Whether a survival gun, something to control varmints or a self-defense option, the truck gun is a vital tool for those on the go.

What Are Top Truck Gun Options:

I spend a lot of time in my truck. It goes where I go, and the reason I drive it is because it can do nearly anything I need it to do. One of the most important things I can and should do is make sure I’m properly armed and equipped in my truck for a variety of situations — including self-defense, the defense of others, survival and sporting opportunities.

Here in rural Virginia, truck guns aren’t novelties: They’re practically listed as standard accessories when you buy your 4X4 from the dealership. I live near the Shenandoah Mountains, and our woods are full of deer, bears, coyotes and other critters. Less than an hour from my house, heavy and stressful Northern Virginia traffic can put my truck and me in urban situations where the need for a firearm isn’t sporting at all, but quite possibly a life-or-death situation.

With a roomy enough vehicle, there’s no reason why a standard AR-15 can’t make for a good truck gun. And as America’s favorite rifle, with most owners being intimately familiar with the platform and sitting on a healthy amount of ammunition and magazines, it makes a lot of sense to choose one for this role. Unfortunately, there’s no getting around the fact that it would be an even better truck gun if their stocks could be folded. There are aftermarket folding stock assemblies for AR-15s too, and those are also worth considering, but why not get something that can fold from the factory?

Eugene Stoner’s next rifle design, the AR-18, solved this issue by eliminating the need for a buffer tube. While never wildly successful itself, the AR-18 has gone on to influence as absurd number of rifle designs that came after it. Brownells’ BRN-180 fits that bill, and its compatibility with standard AR-15 lowers and magazines makes it an even more attractive option than an original from Armalite. Unfortunately, Brownells doesn’t sell a complete version of this rifle, but the BRN-180 upper can be used to very easily assemble one with a folding stock either through the use of the BRN-180 lower or any standard AR lower with its buffer-tube hole filled with a Picatinny rail adaptor. There are many Picatinny-based stock options on the market to then choose from.

However you choose to complete the build, this is an excellent way to have all the benefits of a modern AR-15 in a much more stowable package. They also offer a 10.5-inch barreled pistol version of the upper that could be mated with a folding pistol brace for an even more compact setup. 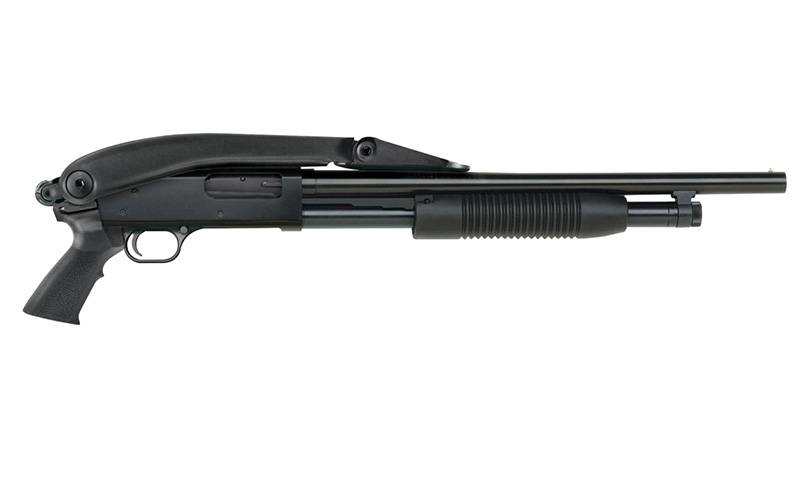 There aren’t many situations a pump-action 12-gauge shotgun can’t handle, making them another great truck gun choice. And like with rifles, a full-size shotgun can fit in a roomy enough truck as well, but that doesn’t mean that more compactness doesn’t sweeten the deal. Without venturing into the NFA and registered SBSs, most peoples’ minds go to firearms like the Mossberg Shockwave when they think of small 12-gauge pumps. While very handy, it also takes a lot of practice and skill to effectively use these stockless shotguns accurately. If you want to hit what you’re aiming at, a stock is always better, even a crappy one.

Here's where the Maverick 88 Top-Folding Stock model saves the day. When folded, it’s only about four inches longer than the Shockwave, but a lot more usable. It may not be as comfortable as a standard fixed stock, but since the primary job of a truck gun is to sit around and wait for trouble the tradeoff is worth it. If a 12-gauge pump is what you want as your copilot, this gives you all the utility of a standard model at three-quarters the length (when folded).

Another solid truck-gun choice is a lever-action from Marlin. Here, I’d push aside the gut reaction .30-30 Winchester and go big by choosing a Model 1895 Trapper in .45-70 Government. The gun has a 16.5-inch barrel, Skinner sights and a big-loop Western-style lever … that is not just for looks. The big loop makes it easy to work in a hurry with gloves on. A .45-70 Govt. is going to stop whatever is threatening you, whether it’s a grizzly bear or a T-Rex. Ammo isn’t that hard to find, the gun is small, doesn’t kick all that much and it certainly has more than enough bite. Better yet, a lever-action rifle is arguably the most reliably fast gun one could want or need in a defensive situation. Maybe a .45-70 isn’t your thing. Regardless, I think the lever-action rifle isn’t confined to shooters who favor old Westerns and cowboy hats. It’s an action that works, it comes in small and lightweight sizes, and it's available in cartridges that can go as big or as small as you want.

Yet another great choice in the truck-gun world is from the good folks at CZ-USA. The Scorpion EVO 3 S1 Carbine is a 9mm Luger-fed semiautomatic rifle that gives its users 20 rounds of ammunition per magazine. The stock folds, changing the gun’s profile from an overall length of 34.75 inches to a mere 24.5 inches. Is a 9mm Luger the best cartridge for a truck gun? That’s a debate all by itself, but if your handgun shoots 9mm Luger and your truck gun does too, well … that makes a lot of sense in my book. You can get smaller pistol versions of the Scorpion, but I like the solid size and shape of a rifle in my hands if I have space, and my truck has all the space I need for a Scorpion EVO 3 S1 Carbine.

OK. Lever actions. Pumps. Semi-automatics. Can a bolt-action rifle be a truck gun? Yes, the battlefield-proven bolt-action rifle can and should be a great choice for a truck gun. If I had to choose one bolt-action rifle for a go-anywhere, do-anything job like that of a trusted truck gun, the Savage Scout Rifle in .308 Winchester would be my pick. Colonel Jeff Cooper long ago designed the scout rifle to be a jack-of-all-trades, master-of-none kind of rifle, and putting a scout rifle in your truck just seems to make far too much sense. There are quite a few high-quality scout rifles out there these days, but for my hard-earned dollar, I find it hard to beat the Savage Arms 110 Scout. Plus, the rifle is fed via a detachable box magazine, which means you can have multiple loaded mags at the ready stored in your truck. You can pick your flavor, too, if the .308 Winchester doesn’t do it for you, it comes in .450 Bushmaster and .223 Remington as well. A good selecting, covering about everything you'd expect a truck rifle to handle. 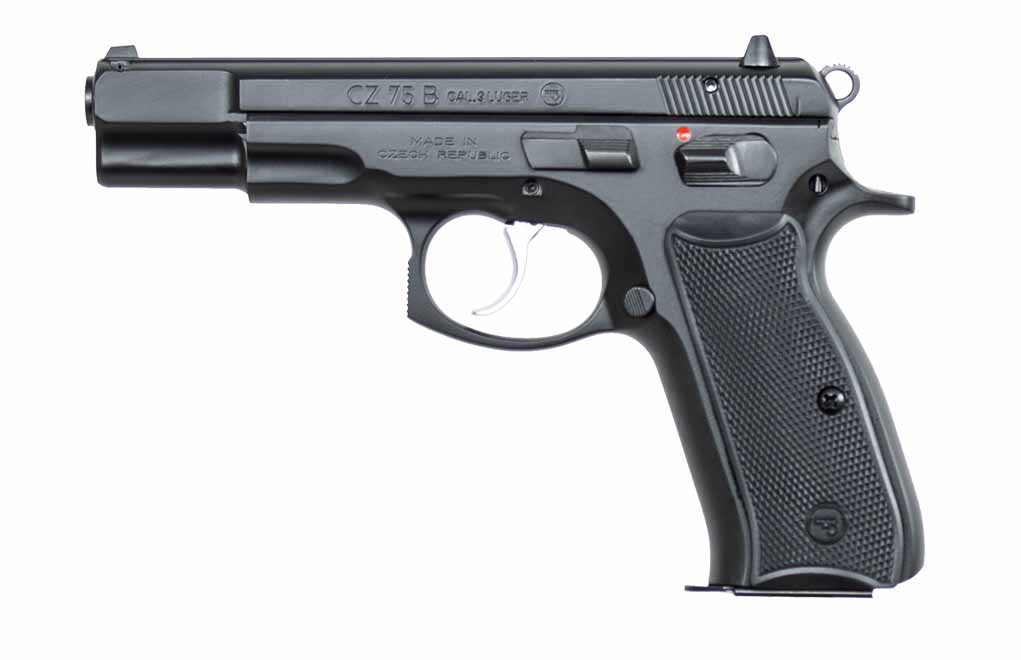 Every truck needs a handgun, and now more than ever Americans have plenty of handgun choices to fit our needs. You have three basic choices: striker-fired pistols, 1911-style pistols and revolvers. Your everyday-carry gun instantly becomes your truck gun when you’re in your truck, but having a truck-dedicated pistol isn’t a bad idea. Me? I’m a sucker for the CZ 75/85 series and use my CZ 85B as my EDC/truck gun. The military-issue 9mm Luger combat handgun was built to handle war. I shoot it well and it isn’t an expensive handgun to own. CZ doesn’t make the 85B anymore, but if you can get your hands on one, you’re going to have a hard time putting it down.

I’ve also grown fond of a Kimber Micro 9 as a new EDC/truck gun. The pistol fits my hand well, shoots well and is super easy to store in small places. Plus, the Micro 9 (LG) models comes standard with Crimson Trace laser grips, which are an exceptional asset to have on a dedicated truck gun — or in any situation.

Another fine choice is the Wilson Combat ARP Tactical Pistol. Need punch? This thing throws lead like Mike Tyson threw punches — fast and furious. It hits as hard as you want because you can get it in a variety of cartridges, including 5.56 NATO/.223 Rem., .300 Blackout, 6.8 SPC and 7.62×40 WT. It holds plenty of ammunition in its detachable magazines, and its small at only 27 inches overall. It weighs 6.3 pounds and comes with a pistol forearm support, so it’s got the mass and grip to hold you steady when you engage it. You can mount any optic you want, but it comes with iron sights as well.

Aside from the actual firearms, truck guns ought to have truck gun tools to keep the guns safe yet accessible and ready for your needs. Quite a few manufacturers make a variety of truck accessories for gun owners, but I’m a big fan of what the folks at Hornady and Tuffy Security offer regarding lockable storage solutions for my truck.

Did you say Hornady? As in the ammunition company? Yes. They make terrific lockable storage solutions for a variety of situations. One key point about lock boxes is that they can easily transfer from your vehicle to your hotel room, home, campsite … you name it. Lock boxes come in a variety of sizes and shapes, locking methods and storability — choose from those featuring RFID or biometric technology, or one that operates with a good ol’ key from the key ring you’ve already got hanging from your ignition.

I know Tuffy Security specifically makes a lockable storage cover for a compartment behind the back seat of my Toyota Tacoma, which is an ideal place for a truck gun, some ammo and other bug-out gear. They also make a clever under-hood security lockbox, and a lockable center console box that fits perfectly for my truck — and likely yours as well.

If you have a truck — heck, the same goes for a car — you ought to make sure it’s equipped to handle whatever situations it and you may find yourself in these days. Having a capable weapons platform — or two — that’s easily accessible, safe from sticky fingers and unintended consequences is paramount to operating safely in our day-to-day lives. Regardless, remember that your truck can be a significant self-defense and survival tool if you take the time and money required to outfit it properly.

Be safe out there.