With proper technique, the lever-action rifle can be ideal for hunting, self-defense or general-purpose shooting.

What you need to consider to run your lever-action rifle like it's high noon:

Lever-action rifles have been around a long time. Patented in 1860, the Henry was the first, and they quickly became known as a rifle you loaded on Sunday and shot all week. Next to the semi-automatic, the lever-action is the fastest cycling repeating rifle. This is partly due to its lever-operated mechanism, but also because the last movement when operating the action solids the buttstock into the shoulder. Ironically, for a rifle that’s been around for more than 150 years, few know how to run one properly. 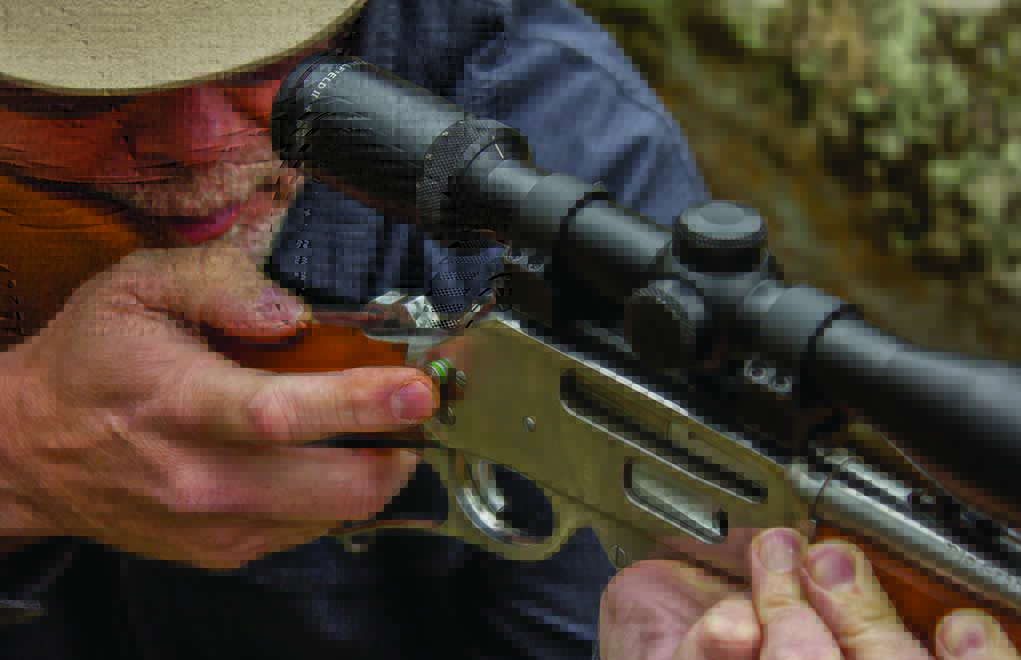 Like with any firearm, the elements of running one correctly are the same: You must be able to confirm its condition, operate it, load it, mount it, fire it, unload it and service it. And, you should know how to clear stoppages. Here’s look at each aspect of running a lever gun, so that you can let all the cowboy in you come to life.

What Condition Is My Lever Gun In?

Firearms are carried or stored in a variety of conditions. The lever gun is no different. Knowing these conditions helps you better have your rifle at the proper stage of ready, and fosters safety.

Condition 1: Magazine tube loaded, round in chamber, hammer cocked and safety off. This is the proper condition for a lever-action rifle right before it’s fired. It should not be carried or fondled in this condition. Some lever-actions have a safety. Traditionalists scoff at their existence and they’ve been known to cause a click in the field when the shooter forgets it’s engaged. In Condition 1, the safety is not engaged.

Condition 2: Magazine tube loaded, round in chamber, hammer forward or at half cock, and safety off. This is the generally accepted carry method for a lever-action rifle. The hammer must be manually cocked before the rifle can be fired. For lever guns with safeties, a version of Condition 2 is with the hammer cocked and the safety on.

Condition 3: Magazine tube loaded, chamber empty, hammer forward or at half cock, safety off. Some prefer this method of carry for lever guns. When the need to shoot arises the action is levered as the rifle is brought to shoulder. In Condition 3, the safety — if so equipped — should not be engaged; it creates an additional needless step to execute before a shot can be fired.

Condition 4: Magazine tube empty, chamber empty, hammer forward and safety off. This is the typical condition in which lever guns are stored.

With the exception of magazine-fed lever-actions, like the Browning BLR and a few others, lever guns are loaded in one of two ways. Cartridges are shoved, one at a time, through a loading gate on the side of the action. Or, they’re inserted into through the magazine tube. In either case, during loading the hammer should be forward. To get a cartridge into the chamber, simply cycle the lever. But, you have to do it like you mean it. A gentle or short stroke can lead to a stoppage. Once a cartridge is in the chamber, you should fire the rifle, place it in Condition 2, or unload it. To place the rifle into Condition 2, place your thumb on the hammer, and while holding pressure, press the trigger. This will release the hammer. As you ease the hammer forward, remove your finger from the trigger and lower the hammer to half-cock. If the rifle is equipped with a safety, you can engage it first to prevent a loud bang should your thumb slip from the hammer.

It’s also a good idea to be able to swiftly load a lever gun that’s empty with a single cartridge. To do this, fully open the lever and shove a cartridge in through the ejection port, bullet first. This is accomplished with the rifle on the shoulder and in the firing position. With practice, savvy lever gun runners can also load the magazine tube through the loading gate while the rifle is on the shoulder. Both skills are good to have and should be practiced.

The easiest way is to unload a lever gun is to cycle the cartridges through the action while the rifle is pointed in a safe direction. While doing this, make sure your finger is out of the lever and away from the trigger. If the rifle is equipped with a safety, it should be engaged.

Lever guns that are loaded directly into the magazine tube are friendlier when it comes to unloading. With the hammer down, remove the plunger from the tube and dump the cartridges out. Then, you can cycle the cartridge in the chamber out by operating the lever while keeping the muzzle in a safe direction.

Most lever guns are svelte, quick-handling rifles, lending themselves to snap shooting. Many mistakenly snap the butt of the stock to the shoulder, and this increases engagement time. You should snap the rifle up, level with your eye, with the buttstock about an inch or so from your shoulder. Keep both eyes open and you’ll be able to see the target and the sights. As you do this, cock the hammer or remove the safety to place the rifle in Condition 1. The last motion should be pulling the rifle back, snug, against your shoulder.

As with any gun, concentrate on the sights, and while keeping them aligned on target, apply pressure on the trigger. When the rifle fires, hold the trigger to the rear, and when you reach the top of the recoil cycle, lever the action and press your trigger finger forward against the front of the trigger guard. As the rifle settles back on target you can reacquire the sights and target, and then place your finger back on the trigger. During the entire process, the butt of the rifle should never leave your shoulder.

Lever guns need lubrication to run smoothly. This does not mean you spray them down with your favorite gun juice. Too much oil will attract dust and gum things up. For best results, take your lever gun apart. This means removing the buttstock to access the lever and trigger mechanisms, and removing the bolt. Consult your owner’s manual for specific instructions.

Once disassembled, apply a small amount of oil to the exterior of the bolt, including all locking surfaces. Next, apply a dab to the actuator or end of the lever, the disconnector and any surface showing wear. Also lightly lubricate the trigger/hammer and hammer spring. Finally, apply a touch to any surface showing wear. Wear indicates metal-to-metal contact. Some oil here will smooth action operation and guard against corrosion. The process should only take a few minutes and about a dozen drops of oil.

Lever guns can jam. Sometimes cartridges or empty cases get fouled in the action because it’s not cycled with authority, or because a part is worn or broken. Sometimes a cartridge can jump the stop and slip behind the loading gate. In some cases you can clear these stoppages by holding your mouth right and rattling the rifle. In other instances, you may have to remove the lever and even the bolt to sort it all out. This makes knowing how to field strip your lever gun and keeping a screwdriver handy all that more important. The best way to avoid a stoppage is to keep your rifle well maintained, only use factory or proven ammunition of the right size and length, and every time you cycle the lever, do it like you mean it.

A Little Bit Of Cowboy

I’ve used lever guns to successfully take game as small as tree squirrels and as large as a buffalo. Though short-range weapons, they make fantastic hunting tools and can aptly serve in the survival/personal protection role as well. But to get in touch with your inner cowboy, you need to know how to run one right.