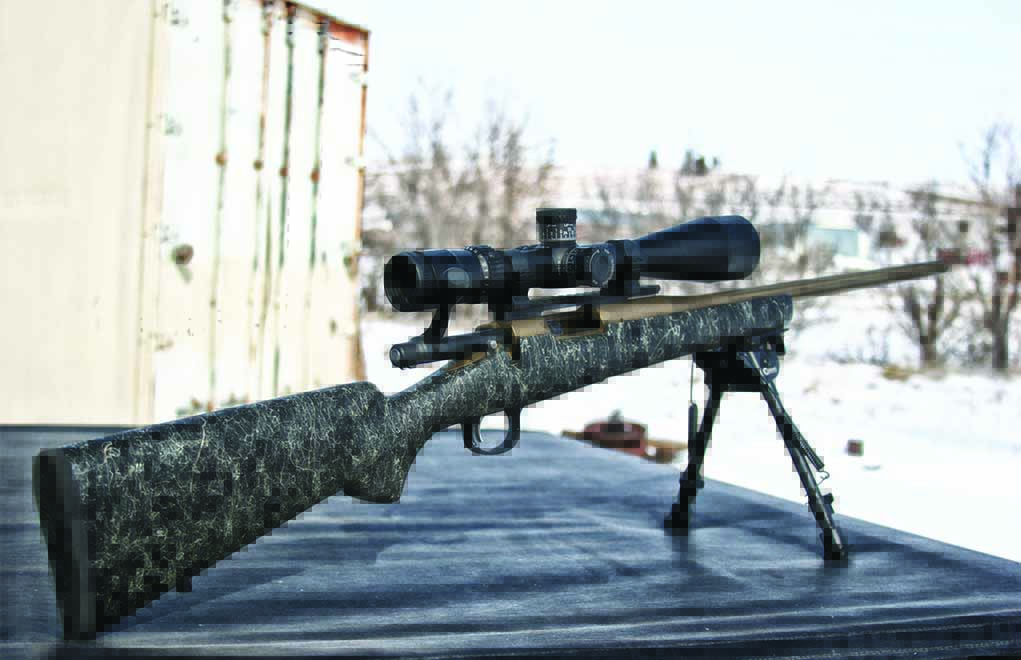 The .224 Valkyrie rifle is no longer strictly an AR affair with bolt-actions finding their legs in the caliber.

What Are The Top Production .224 Valkyrie Rifle Options:

It was the late winter of 2017 during the writer day (Industry Day at the Range) just prior to the great American Las Vegas Shot Show.

Within the first five minutes of the event, my partner and I quickly found ourselves walking up the ramp into the shooting house that was set up for long-range shooting. This event was my first love, bar none, and here I had at least seven or eight rifles to stretch to the 1,000-yard steel while taking a hard look at optics and varied cartridge application on scene.

I reached the far end of the shooting house about an hour later (and by now quite familiar with the long-range steel target at exactly 985 yards), and my eyes settled on a striking bolt-action rifle in a chassis design. It was chambered in the very-new-at-the-time .224 Valkyrie, as offered by Federal Cartridge.

Settling down behind the rifle with a retired Navy SEAL spotting for me, I checked my DOPE, dropped off the safety and set the crosshairs dead center. With a push of about a half-yard right for the full-value wind, I sent an American Eagle 75-grain FMJ pill downrange and onto the steel plate.

My spotter indicated, “Hit,” and I re-chambered and then reset my sights. With round two scored again as a “hit,” I had formed the start of a several-inch group directly over my previous round on the target steel.

Take Flight With The Valkyrie:

Five rounds later, and I’d not recorded a single miss. The target group downrange was close to 5 inches, and the SEAL was asking what my outfit had been prior to retirement.

I advised my friendly spotter that I’d been little more than an old street cop who worked in the department of weapons training on weekends; but I had a deep attraction for good rifles and great cartridges.

The rifle I used that day was the prototype of the now-standard MPA, or MasterPiece Arms bolt-action rifle. However, for the next several months, try as I might, I was not able to get my hands on the turn-bolt system.

For quite some time, the bolt-action rifle was seemingly a pipe dream. The .224 Valkyrie had been designed by Federal Cartridge as an upgrade for the AR platform, and it seemed that is exactly where it was tending to stay.

My real break regarding turn-bolt rifles came in the fall of 2018, when I met up with rancher Ron Harris. He was working with a gunsmith in Deadwood, South Dakota, who had a specified rifle works that involved building ground-up custom rifles for African big-game hunters on a worldwide basis.

The gun was built by Satterlee Arms LLC; Stuart Satterlee was the “top gun” and boss of the operation. A meeting was set, and I was the very first gun writer to enter the doors. I was face to face with Stuart Satterlee and surrounded by old, German-built laths, tooling and CMC equipment with which Satterlee turned out his masterpiece-quality rifles.

Within two weeks, I had the finished rifle on a bench rest and was working out the zero. The rifle comprised a custom-built K&P 1:7 twist, 22-inch, stainless, fluted and suppressor-ready barrel that was hand built. The action was a totally reworked (blue-printed) Remington 700-S with a number of detailed modifications from the Remington design, and the bolt was a reworked bolt face, handle and Sako extractor system that was required in a modified receiver from the original .223 Remington action.

The stock was designed from scratch, and the configuration was taken from a basic rollover cheek piece stock from about the 1920s. This stock was built by Fiberglass Inc., a specialized fiberglass company. It also makes use of a two-part paint process on surface areas.

The barrel and action are Cerakote finished. Mounting a jewel trigger set at 1 pound and cut-rifled, groups shot for zero returned an exactly one-hole impact print at 100 yards. This accuracy level was by way of standard, over-the-counter Federal Fusion ammunition. Later, I found that the rifle took a special liking to Hornady 88-grain ELD Match ammunition as well, and the one-hole groups were showing up once again.

Field-carry weight with optics, bipod and loaded was just a bit more than 9 pounds. This made for an ideal spot-and-stalk coyote rifle, as well as a deadly kill box tool for about a 300-yard square on incoming called dogs. I even envisioned turning some handbuilt, downloaded lightweight bullets in, say, 55-grain loose as open-prairie turkey hunting rounds.

With the range of bullet options from 55 to 95 grains currently, and because I’ve been advised a possible 100-grain bullet would soon to be coming to the drawing boards, the lightweight sporter in .224 Valkyrie was adding up to be almost a one-gun-does-it-all system.

In all respects, this .224 Valkyrie is a one-of-a-kind custom build, but it also represents what can be done in terms of designing a high-quality rifle by way of some creative design applications. I’m sure you might be questioning whether to bother with the bolt gun at all. With the current development in the AR-15 (the basis for the .224 Valkyrie in the first place), was the project even worth the trouble?

The answer to that is not very complicated: Yes, the AR-15 platform took off with the .224 cartridge, and it has done so at a pace well beyond most entry-level cartridges marketed today. As a result, the .224 Valkyrie is returning great performance results, and it’s a major candidate and is dependable and effective for bolt-action rifles. I tend to gravitate toward the bolt gun for more reasons than can be listed here.

For the most part, you can take just about any .223 Remington short-action or rifles chambered in other similar rounds, and with a barrel changeout, bolt face modifications and an extractor switch, the rifle becomes a bolt-action .224 Valkyrie.

For example, I intend to rework an aging Remington .223 VS in a HS Precision stock with just a barrel change and a bolt face modification. In some cases, the need for some modification in the magazine well might also be required. If the rifle shoots well, I might add custom paint and metal coatings in a Desert Tan camo pattern. But I’m getting ahead of myself here.

The point is that a .224 bolt-action Valkyrie might be as close as your gun safe’s door. Who knows? That old Remington BDL, Mauser short-action or CZ that’s collecting dust could open the door to the whole new world of a 21st-century hot-rod cartridge.

It’s interesting to note that of the professional hunters with whom I tend to hang around, all of them are shooting bolt-action rifles with cartridge chambering in factory and wildcat loads that fit the predator rifle requirements. As previously noted, I shot the AR platform for my introductory year of learning the cartridge. I can see that the move to the turn bolt is saving brass, with a trend toward easier reloading, and is creating an off-the-chart performance level. Looking to test the water of a .224 Valkyrie bolt-action rifle or looking for a coyote rifle with legs, the 110 Prairie Hunter is the ticket. With an entry-level price, Savage allows you to see if the action and cartridge are a fit for you. Likely they will be, given the gunmaker is a solid handle at providing plenty of value for a light price tag. In the case of the Prairie Hunter in .224 Valkyrie you get a 22-inch, button-rifled barrel with a threaded muzzle. On top of that, it boasts all Savage’s accuracy-enhancing features, including Accufit adjustable stock, AccuStock internal chassis system and AccuTrigger adjustable trigger. MSRP: $759, savagearms.com Mossberg’s MVP Long Range series is the best of tactical-practical, especially chambered in the ballistically-talented .224 Valkyrie. The stock is one of the highlights of the rifle, with a nifty push-button adjustable cheek rest with 1.5-inches of play and .25 of cast. Pillar bedding ensures absolute rock-solid matting between action and stock, you are assured of repeatable accuracy. And Mossberg’s LBA Adjustable Trigger—tunable between 3 and 7 pounds—ups your accuracy potential. It’s extras—oversized bolt handle, Picatinny rail, threaded muzzle, AR magazine compatibility, 22-inch bull barrel—go a long way to making this a high functioning .224 Valkyrie rifle. MSRP: $910, mossberg.com What can be said about MPA’s rifles, other than they’re dead nuts every trigger pull. Its .224 Valkyrie rifle is no different. Built on the renowned MPA BA Chassis, the rifle has an absolute granite foundation for repeatable accuracy. From there it’s mated with a Curtis Custom Axiom Action and Spencer/MPA barrel, topped off with a Trigger Tech Trigger, giving you an top-of-the-line precision system. And features, there’s too many to mention here, but needless to say, it’s everything you need to make the Valkyrie perform to its upper limits. MSRP: $3,275, masterpiecearms.com

Too much magnification can be a waste of money and too little an impediment to accuracy. What you need to know is how to select a rifle scope based on your magnification needs