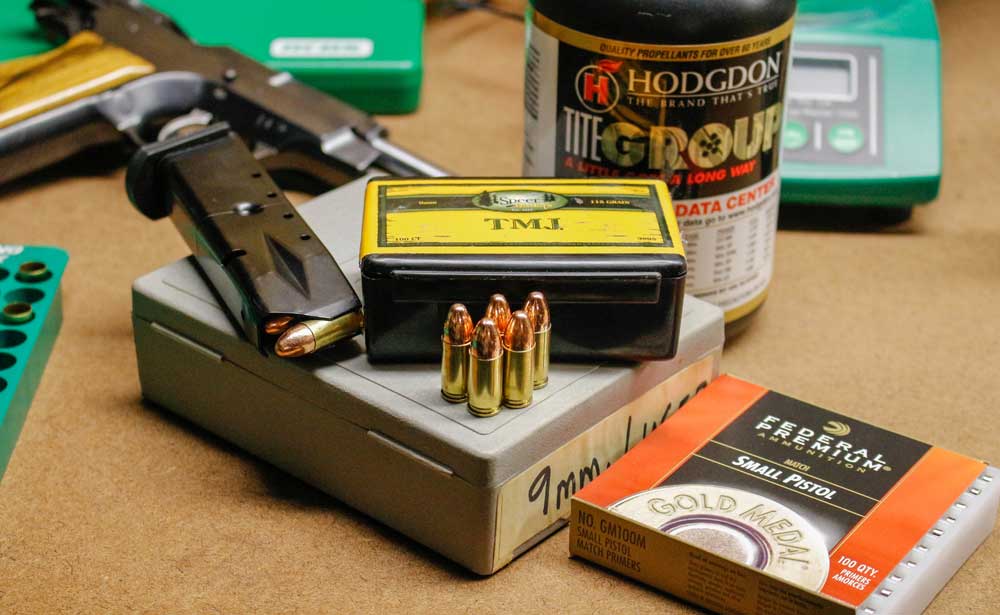 Reloading the 9mm Luger is an easy process, but there are a few useful techniques for getting the most out of your 9mm loads.

In the gun world, debates rage on for decades, and some are pushing a century. Undoubtedly, these debates aren’t going anywhere soon, but some get especially heated.

One of the most fervent is the debate over the .45 ACP vs. the 9mm Luger. Both sides have their staunch defenders, and both have valid points of view. I’ve personally leaned toward the .45 ACP camp, but that certainly doesn’t make the 9mm Luger a bad choice for a carry gun; in fact, I see some merit to the smaller frame and greater magazine capacity.

Adding to the credibility of the 9mm Luger, please consider that the venerable .38 Special (my own choice for a daily carry gun) is looked upon as a worthy carry gun, yet the 9mm Luger is a more powerful cartridge across the board. The .38 has a bit of a heavier bullet at the top end (158 grains), but the 9mm can spit out 147-grain slugs, which is not too shabby.

Bred for military service in 1902, Georg Luger of Germany presented his 9x19mm cartridge to several countries, but it was his home country that adopted it as its sidearm. This is not the place to debate the comparisons to the fatter cartridges; let’s just take it for granted that the 9mm Luger works, because it does.

Reloading the 9mm is not a difficult proposition; it’s a relatively straightforward design. It is a straight-walled, slightly tapered case, which headspaces off of the case mouth. Therefore, you’ll want to be very careful about trimming the brass to proper length and leaving a good, square case mouth. The 9mm Luger has a case length of 0.754 inches, and it’s best to adhere to that length.

I use the RCBS Case Prep station to set the trim depth to the proper length, using the micrometer dial to get things just right. When I flare the case mouths, I don’t flare very deep; just enough to get the bullet seated properly, so as not to over-stress the case. Once your bullet is seated, the only type of crimp you should use is a taper crimp. You see, the traditional roll crimp, which will roll the very edge of the case mouth into the cannelure of the bullet, will destroy the only means of proper headspacing and therefore must not be used. A taper crimp, which squeezes the case wall concentrically, will keep the bullet firmly in place, while maintaining the square case mouth for headspacing.

The 9mm Luger is sparked by a small pistol primer; my own loads have been based around the Federal Gold Medal Match primer, part number GM100M. The consistency of the Federal Gold Medal Match line has caused me to be a bit biased, but they’ve worked very well for me in many different applications. I’d like to share the three loads I use most in three common bullet weights.

At the lightest is a 90-grain Sierra jacketed hollowpoint (JHP) with a skived jacket. This bullet is on the light side of the spectrum, and as a result it will attain the highest velocities. I was experimenting with Ramshot’s ZIP powder and stumbled upon a load that gave very satisfactory results.

Out of a Tangfolio 4½-inch barreled-pistol, this bullet, when seated over a charge of 5.2 grains of ZIP, gave just over 1,300 fps, with very little velocity deviation and excellent accuracy. At 1.010 inches, the truncated cone profile fed very well, giving no issues whatsoever. Some 9mm pistols won’t feed the shorter bullets as well, so you’ll have to do some experimenting with your own gun.

If you do experience feeding issues, I’d make sure your feed ramp is well polished and if it still persists, I’d recommend switching to a slightly longer bullet. Now, the penetrative qualities of such a short bullet may not be as impressive as the heavier-for-caliber slugs, but that is often a quality that is appreciated in a home-defense load. Over-penetration is a rather undesirable quality when there are loved ones in adjoining rooms.

For a good, affordable plinking load, I like the Speer TMJ 115-grain bullet. It has a classic, military-style nose profile, and because the lead core is completely encased in the copper plating it makes a great choice for use in the indoor pistol ranges, as they will leave no lead vapors in the air.

I load this bullet over 4.2 grains of Hodgdon’s Tite-Group for a muzzle velocity of just under 1,100 fps. This is a middle-of-the-road powder charge, which doesn’t recoil too harshly and is easy on the ears, yet cycles just fine in our test gun. I set the bullet for a cartridge overall length (COL) of 1.130 inches to ensure proper bullet tension in the case.

I have long been a fan of heavier bullet choices when loading for the medium-caliber handguns, like the 9mm Luger or .38 Special.

Although the velocities drop off considerably in comparison to the light-for-caliber bullets, the heavier slugs offer fantastic penetration, especially when that bullet is properly constructed. The Speer Gold Dot has a fantastic reputation as a self-defense bullet, even to the point where it is carried by law enforcement.

The 147-grain Gold Dot is a serious projectile in the 9mm Luger, leaving the muzzle at 950 fps, when set atop a charge of 5.6 grains of Alliant’s Blue Dot powder, at a COL of 1.130 inches. This combination will cause any would-be attacker to seriously reconsider their chosen course of action.

Even with the heavy bullet, and a stout load (though our pistol showed no signs of excessive pressure), one of the great features of the 9mm Luger is that just about any shooter can learn to handle the pistol effectively, and that includes this particular load. Recoil was very manageable and muzzle jump was moderate, so it was easy to get back on target. Due to the small case capacity of the 9mm Luger, I sort my brass into lots, separated by headstamp. This way I get as close as possible to a uniform case capacity for each load I develop. As always, you should start at the lowest listed load for each particular bullet, and work your way up slowly.

However, in the 9mm Luger, there is not a wide differential between the starting load and the maximum, so I would suggest that you work up in 0.1-grain increments, watching for high-pressure signs.

The example loads given above are an illustration of the versatility of the 9mm Luger, but there are many more avenues to be pursued. The Luger will run very well on many other powders, like Alliant Unique and Herco, Accurate No. 7, and Hodgdon HS-6. Have fun experimenting with the variety of loads, and enjoy shooting Mr. Luger’s creation.

Editor's Note: This article originally appeared in the Summer 2016 issue of Gun Digest the Magazine.