Here are six handgun drills that are certain to get you closer to mastering the art of the pistol.

What are the essential handgun drills:

Those who consider themselves practitioners of the defensive handgun are always looking for handgun drills that will improve their skill level, and for drills that are fun. The fun part is important; it’s something that pushes us to the range. The getting better part is important, too, because ultimately you are the one responsible for the protection and defense of your life. Here are six of my most often used defensive handgun drills. 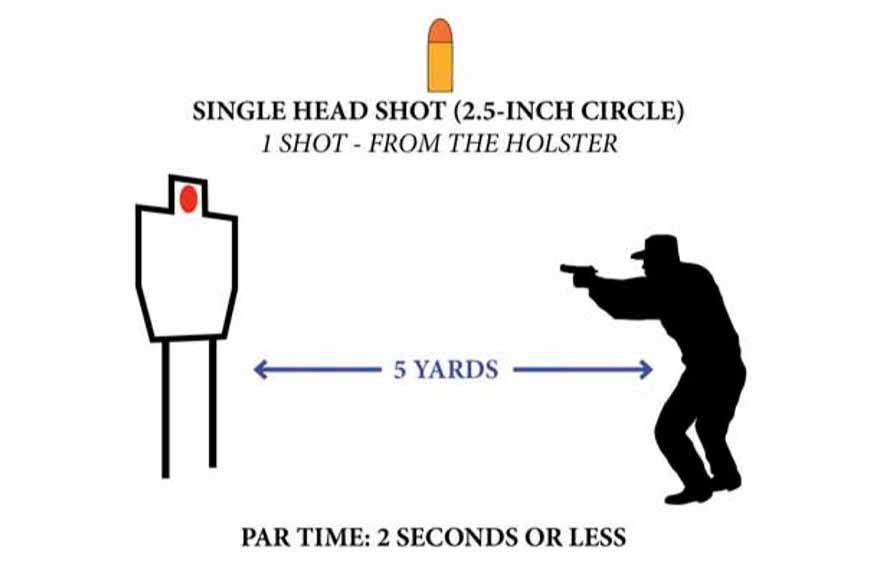 I once asked this of Gunsite Instructor Il Ling New: “If you could only practice one defensive handgun drill, what would it be?” Her answer might surprise many, but this is it: single shots to the head — from the holster.

Pragmatically, it makes sense: It focuses on what, in reality, is the most important aspect of employing a defensive handgun. You have to get your handgun out of the holster and on target, and then deliver a single accurate shot — in a hurry. Conduct this drill from 5 yards and work until you can complete it, on demand, in less than 2 seconds. When it comes to stopping a threat with a defensive handgun, the more holes you make in the right places the better your chances will be. This is why most consider the standard response to be two quick shots, center mass. Some call this a “double tap,” some call the two shots “hammers,” and some refer to them as “controlled pairs.”

Practically speaking, they’re all different, but the underlying premise it two accurate shots delivered center mass, from the holster, very fast. Work this drill from 5 yards, and put two shots center mass in less than 2 seconds. You should be able to cover both holes with the palm of your hand. Defensive handgunners and competition shooters take a different approach to this drill. It’s essentially a double-tap center mass followed by a head shot. Competition shooters fire all three shots without a pause, when the head shot is supposed to serve as the finisher, if the body shots fail.

For training, run this drill like a competition shooter, because the goal is for you to master the transition from the hammered pair center mass, to the single — very controlled — head shot, quickly. From 5 yards and from the holster, double-tap the target center mass, and then make a head shot. Your par time should be less than 3 seconds. Keeping your handgun in the fight is critical. If you get a stoppage, you must clear it quickly. If you run out of ammo, you best solve that problem in a hurry. This drill requires you to conduct a speed reload — which is very similar, and an alternative to immediate action.

Space two targets 10 feet apart at 5 yards distance. From the holster, double-tap the first center mass, conduct a reload and repeat on the second target. You should work at it until you can complete the drill in less than 6 seconds. I devised this drill primarily for testing the shootability of the wide variety of defensive handguns I review. However, it’s also a great tool to use to prepare you for a lethal encounter: Sometimes, one, two — or even three shots — are not enough. It gets its name because it’s made up of four elements of five.

Place a target at 5 yards and, from the holster, fire five shots, into a 5-inch circle in less than 5 seconds. It’s harder than it sounds, and I’ll bet you’ll fail the first time you try it. An interesting and very fun drill I use frequently here at my home range is nothing more than combining all five of these drills into one. If you can conduct it to the standard, you’ve proved you’re a reasonably capable pistolero.

Set up three targets, at 5 yards, spaced 5 feet apart. Conduct the single head-shot drill on the right target, and then the double-tap drill the left target. Now, conduct the failure drill on the center target. So far you’ve fired six shots.

Shooting these drills is not training. Training is learning new skills. Practice is developing those skills. These drills are for you to practice weapon presentation, sight alignment, trigger and recoil control, weapon manipulation, shot cadence and target transition.

They are also fun — especially the last one — and there’s nothing wrong with having a little fun when you’re at the range.

This article originally appeared in the December 2018 issue of Gun Digest the Magazine.