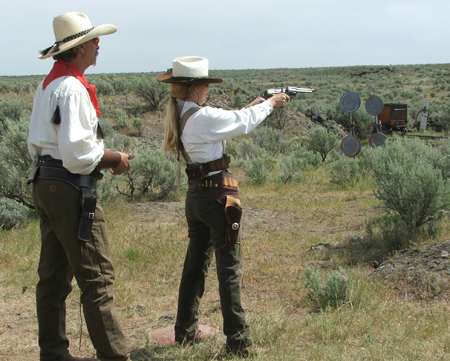 A brief primer on cowboy action shooting, partner. The gun writer with no name gives today's gun fighters a run for their money.

Spring is when I get the cowboy shooting stuff in order.

The cowboys around here shoot all year, but the challenges of winter wind and sub-freezing temperatures make me think about more pleasant shooting in spring. Plus, cowboy shoots have more participants as the weather warms, and people are one of the biggest pleasures of cowboy action shooting.

You will have a difficult time finding a better caliber (pun intended) of people than cowboy shooters, and I look forward to shooting with these folks as much as I like levering rounds through my favorite Winchester. Cowboy action shooting is governed by the Single Action Shooting Society (SASS), which has sanctioned shoots divided into many categories. Aside from various shooting styles, there’s a division between black-powder shooters and smokeless-powder participants.

According to the SASS handbook, 12th edition, smokeless categories include Traditional, Modern, Duelist and Gunfighter. Black-powder categories are Frontier Cartridge, Frontiersman and Classic Cowboy/Cowgirl.  The B Western Category is like the open division, with flashy and fancy costumes.

There are also age divisions in cowboy action shooting. Juniors are 16 or younger, and are divided into Young Guns, 14 to 16, and Buckaroos, 13 and younger. Forty-Niners are 49 and older, seniors 60 and older, and Elder Statesmen/Grand Dames are 70 and older. There are also divisions for women.

Costuming is important at a cowboy match, and competitors must wear authentic garb throughout the shoot and ceremonies. It’s unique to the sport and part of the fun. No Cordura or nylon — only natural materials like cotton and lots of leather.

To get started in cowboy action shooting, you need two pistols, a rifle and a shotgun. The pistols must be single-action six shooters, and the type of sights will decide whether you shoot traditional or modern.

According to the rulebook, pistols with adjustable sights place you in the modern category. The Traditional category requires the blade for a front sight and a notch or slit in the frame or hammer for a rear sight.

Revolvers must be centerfire from .32 to .45 caliber and in common revolver calibers. Participants in the Buckaroo Category, for the youngest shooters, can use .22 rimfire calibers.

The rulebook lists the legal revolver for each shooting category, so if you’re just getting into the sport, that can help you decide which gun to choose. I’ve always liked traditional-type revolvers, which have fixed rear sights. I shoot in the Gunfighter category, and a traditional revolver is required for that.

The main revolver emulated in cowboy matches is the Colt Peacemaker Model 1873. Many shooters use Remington or Paterson conversions, but Colts are the one. A new-model Colt will easily cost you $1,300 or more, and you need two to compete.

Most shooters rely on modern replicas for match guns. Ruger remade the single-action-type revolver in the 1950s, and in the mad rush of cowboy shooting, the gun evolved into the Vaquero. The first Vaquero — now classified as the Old Vaquero — was replaced a few years ago by the New Vaquero.

The Vaquero differs from Colts in that the flat springs have been redesigned with coil springs, and the hammer is protected with a transfer bar. I have shot two Old Model Vaqueros with 4.625-inch barrels for about 10 years, and they are still going strong.

The transfer bar makes the revolver safe for six-shot carry. SASS rules dictate that only five rounds can be loaded in the revolver, and the hammer must rest on an empty chamber. That is for safety, as some shooters use original Colts and replicas that are not safe with six rounds. You can recognize the transfer bar by the profile of the hammer, because it doesn’t have the firing pin attached. Many modern replica manufacturers are switching to the transfer bar. Examples include Taurus’ Gaucho and Beretta’s Stampede.

The Italians gave us Spaghetti Westerns and excellent-quality old West replica handguns. Uberti and Pedersoli make excellent rifles and handguns, and several companies import these guns and then add special features to them. Cimarron, EMF Co., Taylor and Sons and Navy Arms import several varieties of revolvers that mimic old Colts but are much less expensive.

They also produce Schofield-type revolvers and replicas of some early conversions. Many cap-and-ball revolvers of yesteryear were converted to cartridges so folks could use existing parts and frames to meet the new technology. You might check out replicas of those guns if you wanted to emulate that time period.

Holstering revolvers in period-correct or B-Western style is also important. Leather will make or break your look. You can find leather in all price ranges, and it doesn’t hurt to start with less-expensive stuff until you determine your style and shooting category.

If you shoot Traditional or Duelist, you might want to go with a cross-draw for your second revolver, unless you plan to use a border-shift technique (drawing your weak-hand gun with your weak hand, shifting it to your strong hand to shoot and then returning it in reverse order).

If you shoot Gunfighter events, you will likely want a right-and-left holster, with the top of the gun forward on both. When I shoot a Traditional or Duelist match, I border-shift my weak hand gun.

Rifles at the Ready The rifle is probably the most romantic weapon of the old West. The lever gun is the symbol of the West and is still a tactically sound defensive rifle. With a little practice, you can fire a lever carbine as quickly as you can line up the next target. Some shooters are so fast that their brass lines up on the side of the rifle just like with a semiautomatic.

Rifle selection depends on the category you intend to shoot. In general, a rifle must be a lever- or slide-action manufactured about 1860 to 1899, with a tube magazine and an exposed hammer. The calibers must be a pistol caliber for main-match shooting. The .25-20 and .56-50 are exceptions. It’s wise to have your competition pistol and rifles be the same caliber. That comes in handy when reloading ammo, as all your supplies are the same.

Experienced cowboy competitors have several favorite rifles. Early Winchesters had a toggle-action operation system, which still makes for a smooth, fast lever gun. The 1860, 1866 and 1873 Henry rifles are period correct, and the lever is as fast as on newer models. I like the 1873 iron-frame. Many shooters are putting short-stroke kits in these to decrease the travel of the lever to chamber a round. They are SASS-legal within certain specifications.

The Marlin and Winchester 1894 models are great cowboy guns. Even though the Winchester is out of production, you’ll always see a few at every shoot. It has a smooth action and is a great shooter. The Marlin is still in production, and you can’t go wrong with one of the company’s cowboy series rifles.

My club has an SASS-sanctioned Black-Powder Blow Out every spring. I normally don’t shoot black powder, but I like this match. For this, I prefer toggle models, such as the 1873, because they are simple to take apart.

In black-powder matches, there’s a good chance you will have to hose out the action between stages, as it might foul up and make the lever difficult to work. Also, this makes cleaning the gun after the match easier, as complete disassembly is easy.

I shoot smokeless and black powder in my 1873, but you must not use smokeless loads with pressures that are too high. I shoot the same smokeless load in my rifle as my pistol, which produces about 750 feet per second with Hogdgon TiteGroup.

Shotguns are also category-specific for some shooters. Generally, folks use any side-by-side or single-barrel shotgun from 1860 to 1899 without automatic ejectors. Guns can be box-lock or external-hammer guns with single or double triggers. Lever-action, single-barrel, tube-feed exposed-hammer guns of the period are OK, but the only slide-action allowed is the 1897 Winchester original or replica. Various categories require that only certain shotguns can be used. For example, the Frontiersman category requires a side-by-side or lever-action shotgun. All guns are shot with black powder.

Until recently, you could find an original shotgun for a good price. I just found a smoking deal on GunBroker.com for an original 1897 from 1905. I had to remove a poly choke and reface the barrel, but it was well worth the time. It’s very cool to shoot matches with an original gun. (That goes for pistols and rifles, too.)

Stoeger is still a good choice for double-barreled shotguns, and the Chinese make 1897 replicas that are a less expensive option than originals. Remington markets some inexpensive doubles that are good for cowboys.

Shotguns can only be loaded with two rounds at a time. That keeps pumps equal with doubles. Also, it’s wise to have a spare shotgun, especially if you travel far to shoot. Some originals are finicky and can break down. The same goes for the newer replicas.

One thing about cowboys is there will always be folks that let you borrow a gun to finish a match, even if you shoot better than they do. It’s the cowboy way.

I have always shot in the Gunfighter class, except when I just wanted to do something different. My mentors always told me to practice with my weak hand, and I stress this to my students, too.

Shooting as a gunfighter has made me do that. Plus, it’s cool to shoot like gunfighters in the movies. The biggest problem I had is lining up the sights. Now, no matter the type of gun I’m shooting, my scores are better with both hands because I’ve trained my eye to go from gun to gun.

I live pretty far from any practice matches, so I don’t get to practice as much as I’d like. However, Action Targets makes some high-quality steel targets suitable for cowboy shooting. Cut them in round or cowboy configurations.

DS Welding also makes targets, including the Original Bird/Can Thrower, which is a shotgun target. I missed a similar pop-up target during a match once. By practicing more, the pop-up is dead meat.

Having a few targets around keeps me in shape when I can’t make it to practice matches.
Action Target also has a new hostage target that’s a silhouette plate with a 4- or 5-inch rotating target that goes back and forth when hit in the disc of the head. That gives a cowboy shooter a big, fast, precision target. It’s a fun, challenging addition to a cowboy shoot.

All cowboy matches require all-lead bullets. You can mold your own, but with companies such as LaserCast and Meister around, I don’t bother. It gives me more time to pour lead for my buffalo gun.

Give it a Try

Cowboy shooting is one of the fastest-growing shooting sports, and it’s easy to see why. It’s more fun than a tree full of young hoot owls. Shooting guns has been a part of my work for years, and to get dressed up like a cowboy, mountain man or B-Western hero and shoot guns in old West scenarios with like-minded grown-up adolescents is just plain fun. In fact, that’s the whole idea behind cowboy shooting — having fun.