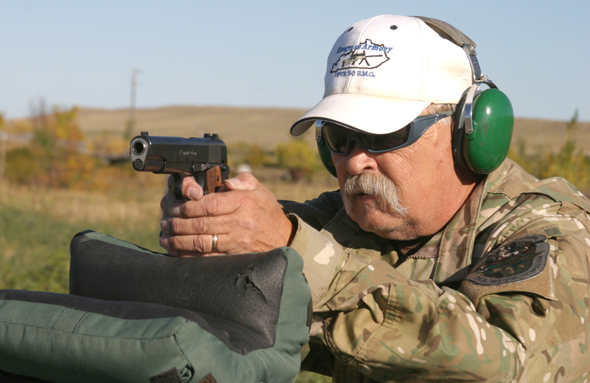 During World War II Remington Arms Company built nearly 28,000 Model 1911 .45 automatic pistols as a contribution to the war effort.  After that run in manufacturing the company dropped the hard-hitting from its line for some six decades. It’s back!

The new Remington 1911 R1 .45 Government has moved from a marketing idea to reality and it is slowly getting into the hands shooters.
With a basic design taken right from the original 1911 playbook, Remington has stayed with the shallow main spring, military controls, and all-steel construction. Remington has also emblazoned the new R1 with the big “R” along the side of the ubiquitous 1911 slide.

It took lots of sweet talking and a strict promise to return the test gun as soon as possible, I was lucky enough to get Chris Ellis, and Todd Sigmund of the Remington promotions department to turn a sample loose for some proper field evaluation work.   Don’t misunderstand me here.   If I had my way that gun would never leave my gun vault, but thanks to the very limited production of the weapon at the time of the review, finished guns were going to buyers instead of gun writers. I got lucky.

The 1911 and I go back to just after the end of WW II.  In those days the guns came back to U.S. arsenals as surplus products, and as such the DCM program though the NRA would allow members to pick these guns up for just a few dollars each.  I have owned Colts, Singer Sewing Machine, and Remington Rand variants of the big handgun over the years and am still a fan of the pistol today. In that I am most assuredly not alone.

The new Remington 1911 R1, is “old school” in terms of about 90 percent of the weapon; so much so that it fits the mold when SASS shooters turn to Wild Bunch shooting competition with the .45 Government versus a six gun.  Save for the sights and a few bright metal areas at the muzzle and trigger, the gun is a dead ringer for that first Government Model 1911 Doughboys carried to World War I.

Just handling the gun was like coming home again for an old-time .45 shooter like me. I have not shot any pay targets, or dropped a bad guy with one as a police officer, but I have sent one pile of ammo at paper, snakes and even a few irate raccoons or coyotes on night hunts in the past.  There was a short period of time, when I was a police officer, that I was lobbying for the gun as a duty weapon as street gangs were out gunning most of us any day of the week. My idea just didn’t fly because most police chiefs are great politicians and not really all that gun savvy.

Coated in a dull blue/black The R1 is not a showboat handgun. On the other hand, the gun is nicely appointed with a quality working finish, well-made controls, and a very smooth function from the slide to the hammer and trigger.   With a slide and frame of solid steel the gun is the weight of the real 1911s of old, and when you’re out of ammo it can serve well as a club if necessary.

With correct walnut stocks of the time period John Browning introduced the gun to the world, the R1 only lacks the smaller front and rear sight found on the old Army, and Cavalry models; but no one misses those. The lanyard ring has also been eliminated from the frame.   Save for those small details the Remington R1 is a great duplicate of the first guns the company produced way back when.

All controls of the gun are correct and what you would expect for a 1911.  The grip safety is genuine, with a full cocked-and-locked lever. Nothing has been omitted on the gun in terms of the John Browning/Colt design.   I like the fact that “Remington” is stamped on the magazines, slide and frame.

Testing the new Remington R1 included shooting three different brands of 45 ACP ammo. I selected several because I wanted to be sure the loads that Remington shipped were not about to be the only thing the gun tended to digest.

First up on the sand bag static test bench was the CCI Blazer brass load with a 230-grain FMJ bullet .  Seven rounds at 20 yards produced some solid accuracy with a 5 1/ 2-inch vertical string and under 3-inch across.  Most rounds fell into the 3-inch cluster making for a very acceptable basic workhorse, stock and standard model 1911.

Moving to Remington’s own UMC brand also with a 230-grain FMJ bullet the group opened a bit, but on the other had I was not totally up to snuff either.  In effect, I think much of the accuracy loss was the shooter in this case.  With 14 rounds down range at 20 yards, five of them hit the dead center mark and almost fell atop one another, with the rest as flyers out to about the 6-inch ring.   Again, everything I sent out of the gun was well within center mass in terms of a combat scenario.

Shooting was topped off with a run of Magtech 230-grain FMJ ammo and like the others these loads dropped inside the 6-inch ring and stacked well within the 4-inch circle. The three white dot sights being a partridge style allowed some better sighting control even in low light.

Turning back to the Remington fodder I proceeded to shoot Birchwood Casey tactical targets (blue men) in sets of two with a 10-yard spacing, and at a distance from the muzzle of 15 yards.  Shooting seven-round strings with three double taps and a final single round down range the gun never failed once to produce two rounds in the dead sure vitals, with all others making target contact between the lower ribs, arms, or belt line extremities.  In five runs over the blue men targets I never failed to make the stop in under seven seconds.

In terms of function the gun never failed to cycle save for  single time with CCI cartridges. In this case the rim of a case got caught on the feed ramp and bent back a bit, hanging the whole round, and causing a jam.  Using the tap rack method of clearing a malfunction I was up and running again in seconds. For a total of 147 test rounds, that was the only incident that could be regarding as a function problem.

Because this gun is just about hand-made and at a mass production price ($600) I believe a number of possible problems have been pushed aside with the final product.  When being built the R1 is set out on a line of assembly workers each of have a single task as the individual gun moves along toward completion.  When the gun is completely assembled it is reviewed by the last individual on the line then sent to the test tunnel for a function and accuracy review.

The gun is tested with live ammo and if it fails to meet specs it is returned to the line once again for further adjustment. On the negative side this is one reason why it takes so darn long to get one of these old school Remington Arms hand cannons into a guy’s gun safe.

While it seems a bit crazy to talk abut the future of the R1 when you currently can’t get one by hook or crook, the gun will catch up in production and as such be ready for an upgrade sooner or later.  The 1911 45 Government, as we all know, is an open canvas for a gun-building artist.

Remington will add different configurations to this product line as time goes by.  Race guns, combat specials, and related target models will be sure to surface along the road to future development.  Everything new and advanced will be based on the basic Model 1911 R 1, but the guts of the grand master in auto-loading handguns will still be that hard-pounding John Browning-designed frame and slide doing all the real work.

For more information on the Remington R1, please visit https://www.remington.com/
.

This article appeared in the May 23, 2011 issue of Gun Digest the Magazine.