FREDERICH VETTERLI was an engineer working for Schweizerische Industrie-Gesellschaft (SIG) in Newhausen, Switzerland. In the late 1860s he worked on a repeating cartridge rifle for the Swiss government. Fixed metallic cartridges had only been perfected a few years previously and several nations were already working on single shot designs but the Swiss realized the limits of single shots and bypassed that stage in rifle design.

The Mauser-designed box magazine, that now seems so simple and should have occurred to designers after about ten minutes of thought, was still almost two decades away. The first generation of rifle-feed systems used magazine tubes, usually located underneath the barrel. The challenge here was how to get the cartridges from the tube to lift up to be loaded into the chamber.

This is where Vetterli got inspiration. He borrowed a design from the United Stated and the Winchester Repeating Arms Company. The Model 1866 lever action rifle was already well known in global arms design circles.

Lever action designs were not very attractive to military buyers because of the complexity of the designs and cost of manufacture. However, Vetterli liked what he saw in the Winchester 66’s feed system. It used a lever-actuated elevator to lift the cartridges from the magazine tube. The elevator mechanism and much of the Winchester’s receiver design was incorporated into a bolt-action rifle.

In January 1869, Switzerland became the first nation to adopt a magazine-fed repeating rifle. The Model 1869 had a 33-inch barrel and the magazine held 12 rounds. There were 150,000 Model 1869 Vetterlis made by nine contractors.

The rifles originally were issued with a loading gate cover, that kept dirt out of the action, and a magazine cut off, which allowed the rifle to be used as a single shot. Both of these features were deemed unnecessary and were phased out of later models. There were several models of Vetterlis made: 1869, 1869/71, 1871, 1878 and 1881. All used the same action design and the differences were minor.

Changes included rear sights, magazine capacity, checkering on forearm, and butt plate shape. There were also a limited number of carbines made with barrels of 18-19.5 inches long. Also made in limited numbers is the Stutzer rifle, which has double-set trigger. These were for sharp shooting and target use. The Swiss used the Vetterli until it was replaced by the Schmidt Rubin Model 1889 rifle in 7.5x55mm. 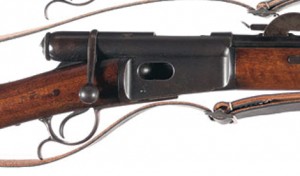 All Vetterlis were chambered for the 10.4x38R rimfire cartridge. It is loaded with black powder and the bullet weighs 334 grains. This cartridge is usually called a Swiss .41 rimfire here in North America and Remington once manufactured the .41 rimfire here. Many Vetterlis were imported in the early 20th century. It was one of the first foreign military surplus arms that were available to American shooters for very low prices.

They were even somewhat popular as hunting rifles and many gunsmiths built shortened “sporters” out of them. In 1942, Remington dropped the .41 Swiss from their line and the Vetterlis fell into the oddity category where they languished for years.

When I started selling at gun shows in the mid 1980s there were a few firearm models that seemed to turn up frequently but very few buyers were interested. These would languish on sellers’ tables or be carried around by attendees looking for a buyer. They were not worth much money. I remember seeing examples of these guns sell in the $50-100 range all the time.

And even then it was a hard to find a buyer. If ammunition was not readily available, shooters had no interest in these historical relics. A few of the under-appreciated rifle designs that come to mind are the Dutch Beaumont, Austrian Werndell and the Swiss Vetterli. Of all these models, the Vetterli has a unique distinction that makes it special to collectors of military firearms. The Swiss Vetterli was the first bolt-action magazine-fed rifle ever adopted as a service weapon.

The days of $50 Vetterlis are long gone. The current going rate for a Vetterli is $250-500 depending on variation, maker and condition. The Stutzer and carbine versions bring as much as three times what a rifle will. Be aware that there were many carbines made by shortening standard rifles. This was done by importers such as Bannermans that had thousands of long rifles on hand that were hard to sell.

For detailed information on the Vetterli rifles I recommend the book, Swiss Magazine Loading Rifles 1869-1958 by Joe Poyer from North Cape Publications. It is as an excellent reference on Swiss rifles. Also there is an excellent website that features Swiss firearms, www.swissrifles.com.

In recent years there has been a growing interest in shooting the old black powder cartridge rifles. The original 10.4x38Rmm being a rimfire round does not make reloading a practical option. The answer is simple. Change the Vetterli bolt to shoot centerfire ammunition.

This is a fairly easy conversion to make for someone with access to a lathe and a bit of machining skills. All that is done is adding a centered firing pin to the striker and drilling a hole in the center of the bolt face. New centerfire 10.4x38Rmm brass can be formed from .348 Winchester brass. The forming dies are not inexpensive but once the investment is made a 130-year-old Vetterli can once again belch smoke.